Germany’s recovery was beginning to stutter even before a fourth wave of Covid engulfed Europe, figures have revealed.

The EU’s largest economy grew by just 1.7 per cent in July to September – missing initial estimates of 1.8 per cent, according to its federal statistics body Destatis, and pointing to a tough year ahead for the new government led by Olaf Scholz.

The slow-down in Germany’s rebound meant that its economy was still 1.1 per cent smaller in the third quarter of the year than it was pre-pandemic, and was heading in the opposite direction to the UK where optimism is rising. 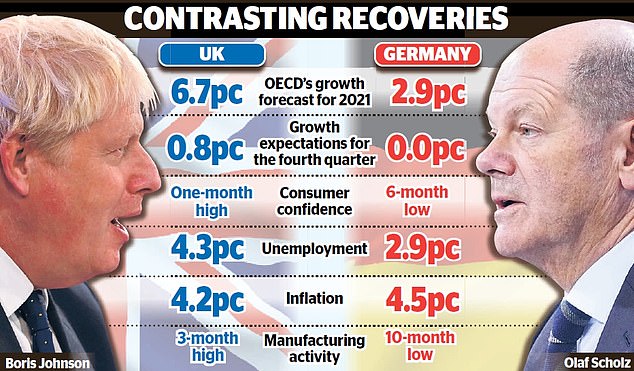 The slow-down in Germany’s rebound meant that its economy was still 1.1 per cent smaller in the third quarter than it was pre-pandemic,  heading in the opposite direction to the UK

Britain’s rapid vaccination roll-out, including booster jabs for the most vulnerable, has helped the country return to relative normality, while much of Europe is now struggling to control spiralling cases.

Experts think there will be worse to come for Chancellor-elect, Scholz, amid fears that growth will grind to a halt in the final three months of 2021 as the government is forced to re-impose pandemic restrictions.

In another sign of the gloom in Germany, consumer confidence tumbled in November as households grew worried about rising Covid cases and soaring inflation.

It was in stark contrast to the UK, where output appears to be holding up despite inflation worries and supply chain chaos caused by the pandemic.

Figures earlier this week showed that business was booming at Britain’s factories, with manufacturing order books at their highest level since records began in 1977 when James Callaghan was prime minister.

And British shoppers’ confidence crept up in November, according to data analyst GfK which said the optimism from consumers was ‘good news for retailers in the run-up to Black Friday and Christmas’.

In Germany, however, GfK’s figures showed households’ confidence was tumbling.

Ariane Curtis, global economist at Capital Economics, said: ‘The fourth-quarter outlook has deteriorated in Europe, with greater risk that more countries will need to tighten restrictions amid the latest Covid surge.’

This was ‘particularly true for Germany’, she added, as weaker activity in the services sector which covers restaurants and retail would add to the problems the economy is already facing from supply chain disruptions in car manufacturing.

Curtis said: ‘By contrast, recent data for the UK suggests the economy has held up relatively well despite the ongoing supply shortages.’

While economists are expecting the UK to grow by 0.8 per cent in the final quarter of 2021, many now think Germany will stagnate – or even see its output shrink again.

This fragility will cause a headache for the country’s new coalition government, formed this week, which is hoping to find the money to boost investment in technology and green energy.

Ricardo Amaro, senior economist at Oxford Economics, said: ‘It is clear that the recent resurgence in new virus cases is leaving a mark on German sentiment. With some public health restrictions being re-tightened, we expect economic activity will also be impacted.’

He said it was ‘increasingly plausible’ that activity would contract over the final three months of 2021.