Greenpeace campaigners have erected a 12ft oil-spattered statue of Boris Johnson at Downing Street in protest at a new oilfield.

Activists chained themselves to the statue, which has been installed while the Prime Minister enjoys a Marbella holiday with wife Carrie.

The demonstrators led a protest of around 40 people, with 16 locked onto barrels and the mock statue of the Prime Minister while others held banners reading “Boris: Stop Cambo”.

The group called for the Government to end the UK’s reliance on oil and to urge Mr Johnson not to sign off on a new drilling permit at Cambo oilfield, west of Shetland.

There had been at least three arrests during the protest, with more expected as protesters continue to be cut out of their chains by police.

Greenpeace says it is protesting against the pending approval of the new oilfield in Cambo, off the coast of the Shetland Islands.

The Government looks set to go ahead with the plans, which if approved, according to campaign group Stop Cambo, the site would produce 170 million barrels of oil and generate emissions equivalent to the annual carbon pollution from 18 coal-fired power stations. 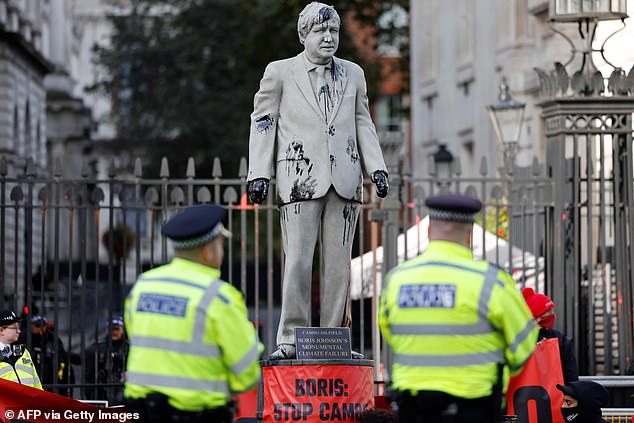 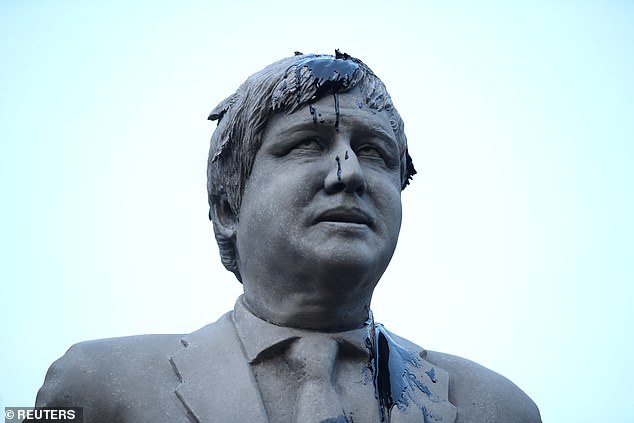 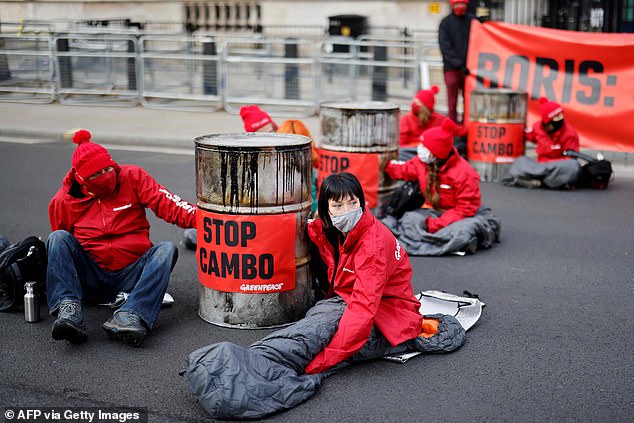 Greenpeace says it is protesting against the pending approval of the new oilfield in Cambo, off the coast of the Shetland Islands

The oilfield, which will emit more than three million tonnes of carbon during its lifespan, could operate until 2050 – by which time Britain has vowed to be net carbon neutral.

Philip Evans, oil campaigner for Greenpeace UK, said: ‘People across the UK are feeling the stresses of a gas price crisis as well as a climate crisis, and the government acknowledges that our reliance on fossil fuels has left the UK vulnerable and exposed. People are right to feel angry and upset.

‘Johnson’s failure to act has left us with petrol queues, energy companies going bust, offshore workers unemployed for months on end, and a deepening climate crisis.

‘Johnson must stop Cambo, and instead prioritise a just transition to renewable energy to protect consumers, workers and the climate from future shocks. If he doesn’t, he will be remembered as a monumental climate failure.’

The protest comes just weeks before the UK hosts a global climate change conference in Scotland.

It also comes as the UK faces a mounting gas which will see annual bills rise for all Britons in the coming year by up to £1,000 while energy-hungry factories say they may have to reduce hours or shut down completely.

There are still shortages of petrol in London and the south-east almost three weeks into the crisis while there are gaps on shelves amid warnings that Christmas foods and gifts could be in short supply due to a lack of HGV drivers and problems with the global supply chain.

Kwasi Kwarteng told Sky News he was ‘constantly’ in conversation with the Treasury to see what support can be given to manufacturers and energy firms.

But a Treasury source hit back, saying: ‘This is not the first time the [Business] Secretary has made things up in interviews. To be crystal clear, the Treasury are not involved in any talks.’

Firms have slammed ministers for failing to help protect companies from an energy price shock that could see factories shutting down within weeks. 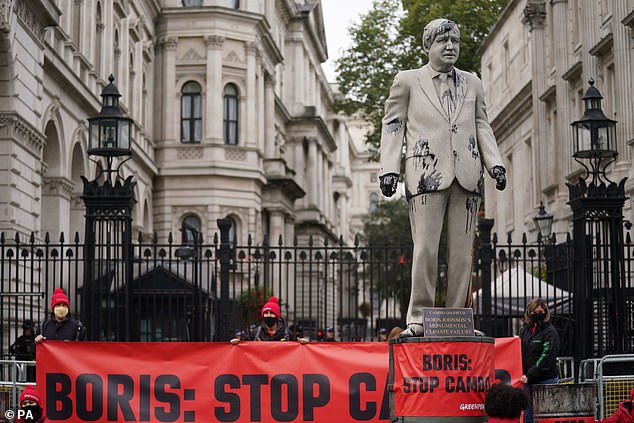 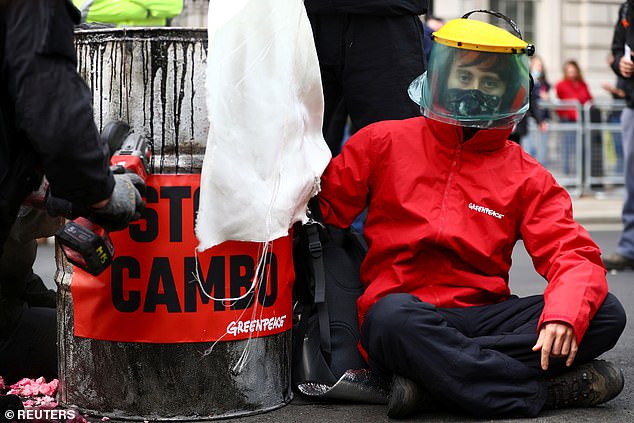 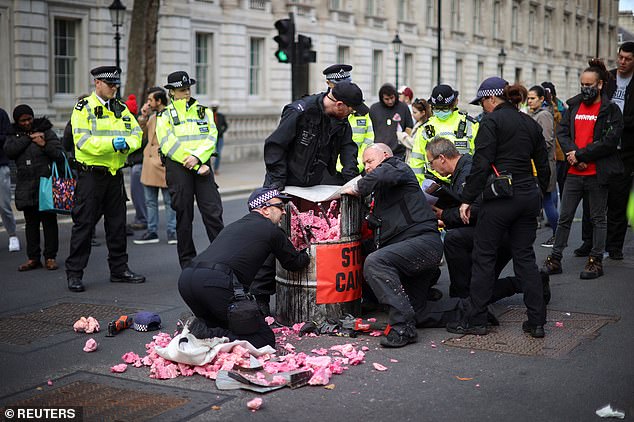 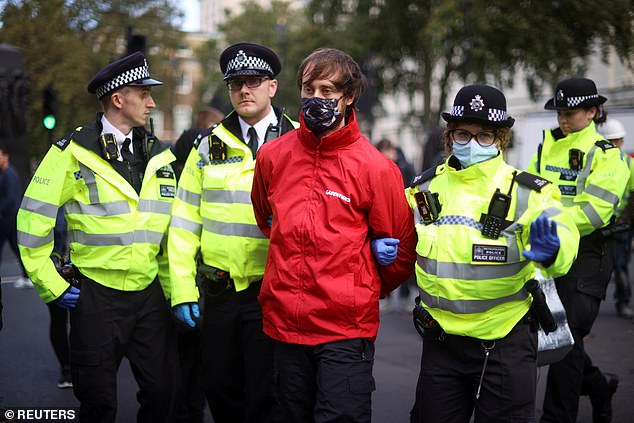 ‘As such, longer and more frequent pauses in production are becoming a fact of life. These circumstances are simply not sustainable for the sector. We urge the Government to take action, as has been done in Italy and Portugal, to support the sector.’

Dr Laura Cohen, chief executive of the British Ceramic Confederation, said: ‘I am really concerned that the Secretary of State hasn’t understood the urgency of what we’re asking for.

‘We need practical gas emergency measures that keep enough gas available and our factories going when supplies get tight.’

Meanwhile, Boris Johnson also came under scrutiny today for jetting off to Marbella as the crisis continues.

Business leaders have insisted the PM should be ‘banging ministerial heads together’ over the response to the looming ‘winter of discontent’ instead of sunning himself at a £25,000-a-week private estate near Marbella.

Within hours of Mr Johnson departing chaos broke out in Whitehall over whether there would be a rapid bailout to help struggling firms survive the energy crisis.

Business Secretary Kwasi Kwarteng said he was looking to see whether ‘existing support’ was ‘sufficient’ despite warnings that some factories could shut in weeks. But in an extraordinary briefing war, the Treasury, which is run by Chancellor Rishi Sunak, accused him of ‘making things up’ by claiming its departments were in talks about helping industry.

Tory MP Andrew Percy – who has a steel works in his Yorkshire constituency – urged ministers to ‘grow a pair’ and step in.

‘If the government doesn’t intervene here then it will amount to an abandonment of the north and midlands, where heavy industry and manufacturing is primarily located,’ he told the Times. 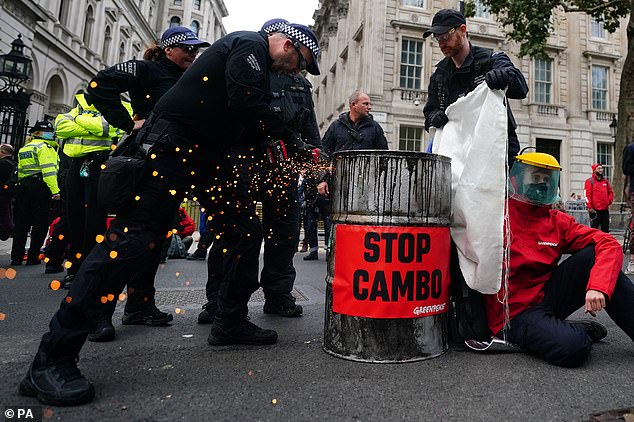 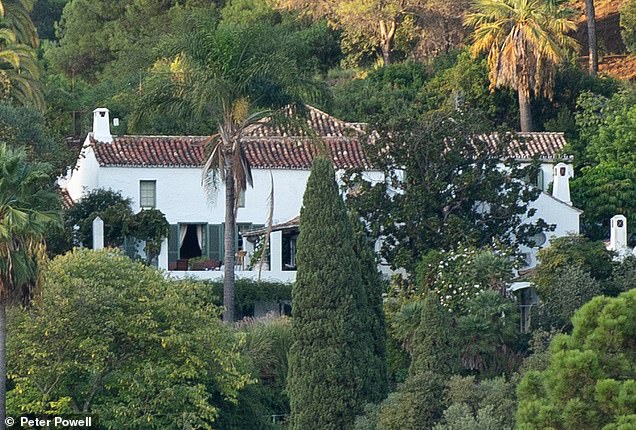 Boris Johnson and his pregnant wife Carrie are taking a foreign break at a £25,000-a-week Marbella hideaway owned by the Prime Minister’s wife’s close friend and Tory peer Zac Goldsmith 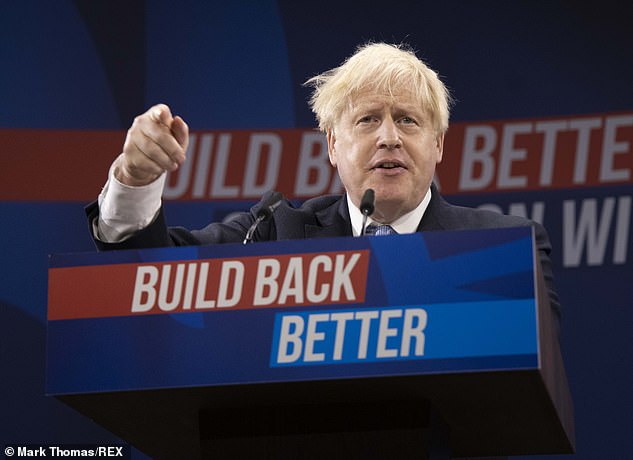 Boris Johnson is sunning himself in Spain as Britain is in the midst of energy, petrol and supply chain crises

There are also claims the the Conservative Steel Caucus, which includes around a dozen Tory MPs with industrial seats, has been making increasingly desperate representations behind the scenes.

Mr Stace has today called on the Prime Minister to ‘bang ministerial heads together’ to avoid an industry crisis hitting his sector.  He told LBC: ‘This is a critical time. The Business Secretary has also said it’s a critical situation, and therefore why is Government just sitting on its hands and doing absolutely nothing at the moment?

‘From my point of view, today, with the reported Government infighting between the Treasury and BEIS, the Prime Minister now needs to bang ministerial heads together, take control and remember that if he does nothing, then his levelling-up ambition will be left in tatters.’

Andrew Percy, the Conservative MP for Brigg and Goole whose constituency contains the gigantic Scunthorpe steelworks, called on the government to ‘grow a pair’ and intervene to save jobs.

He told The Times: ‘Ministers have a choice. They can bury their heads in the sand and pretend they have no responsibility, or they can grow a pair and accept that a lot of the problems we have at the moment with energy costs in the UK are a consequence of decisions taken by governments in this country. Whether it’s labour shortages, whether it’s energy costs, we seem to be saying: ‘Well, industry needs to go away and sort that out. It’s not for us’.’

But defending the PM’s holiday Security Minister Damian Hinds said: ‘What is important for the rest of us actually, for the whole country, is that the Prime Minister does get to have some family time, does get to have a break’.