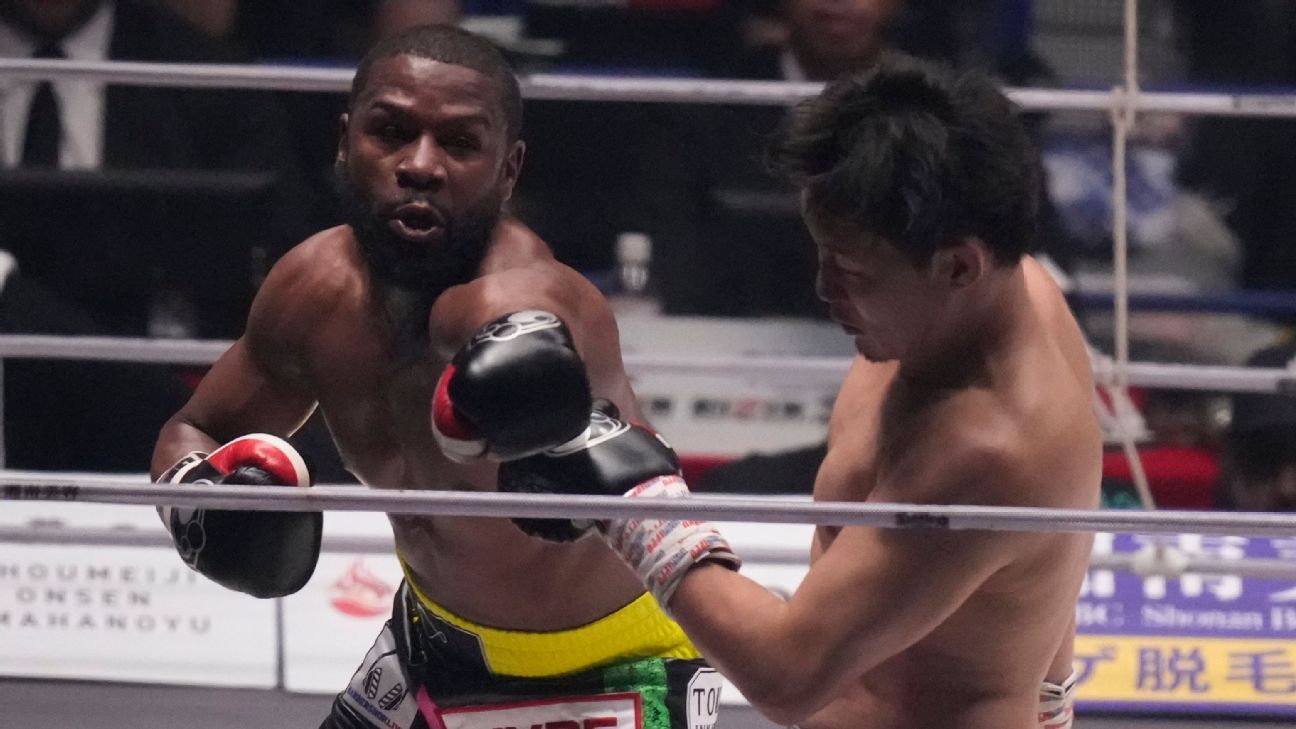 
Floyd Mayweather is still winning boxing matches, even if they won’t go on his official pro record.

The legendary boxer stopped Japanese MMA fighter and YouTuber Mikuru Asakura at the end of the second round with a big right hand on Sunday’s Rizin Fighting Federation card in Saitama, Japan. It was Mayweather’s second exhibition match this year and his second in Japan since his retirement from pro fights.

Mayweather will reportedly make in the range of $20 million for the bout, which was scheduled for three rounds. Manny Pacquiao, Mayweather’s old rival, was ringside.

“I would like to thank the whole country of Japan,” Mayweather said afterward. “Unbelievable country, unbelievable people. An exciting, incredible turnout. Round of applause for this great competitor right here.”

After an uneventful first round in which Asakura landed some body shots, he had some success in the second round, connecting several times to Mayweather’s head with lefts and rights from a southpaw stance.

But Mayweather, one of the best boxers ever and the highest-grossing combat sports athlete of all time, came back with hard shots of his own. He landed hard to the body right before the finish then set up Asakura for the big right at the second-round bell, which ultimately ended the bout.

Asakura was slow getting up, and referee Kenny Bayless waved the fight off before either boxer got to his corner after the second.

“Thanks for having me,” Mayweather told the crowd. “I’ll be back.”

Mayweather, 45, acknowledged Pacquiao in attendance in his postfight speech, calling him oddly a “future” world champion. Pacquiao, 43, addressed the fans before the exhibition and again afterward.

Prior to the fight, Pacquiao said Asakura, 30, had traveled to the Philippines to ask him for advice on how to compete against Mayweather. Pacquiao added that he was in attendance to support Asian combat sports. Afterward, Pacquiao said twice that he hopes he’ll be invited back, causing the commentators to speculate that there could be something brewing with Rizin, Mayweather and Pacquiao.

“I hope this is not my last invitation to watch a good fight, a good exhibition,” Pacquiao said.

In a strange scenario before the bout, a man who was supposed to bring Mayweather flowers — a combat sports tradition before fights in Japan — threw the bouquet down on the canvas rather than handing it to Mayweather.

Mayweather came to the ring wearing a jersey with the number 50 on it, signifying his 50-0 pro record. In December 2019, Mayweather finished Japanese kickboxing prodigy Tenshin Nasukawa in the first round after three knockdowns. Nasukawa competes at around 120 pounds. Asakura was much closer to Mayweather’s weight, perhaps a bit bigger, on Saturday, though there was no official contracted weight.

In an undercard bout to the Mayweather vs. Asakura headliner, Mayweather’s bodyguard Ray “Jizzy Mack” Sadeghi was knocked out in a boxing match by 135-pound kickboxer Kouzi. There was no weigh-in, but Sadeghi was significantly larger than Kouzi in the ring.

Mayweather had an exhibition bout against Don Moore in May in Dubai, and Mayweather has said he will participate in another such matchup in the Middle East before the end of the year, though no opponent has been named.