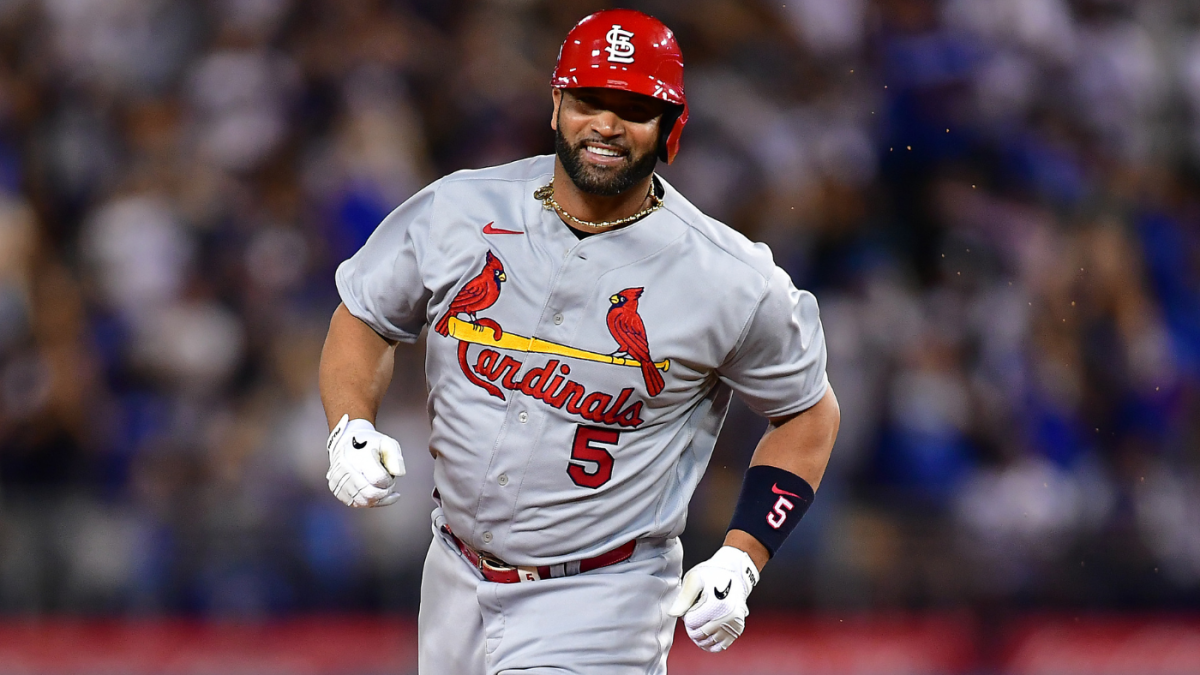 
St. Louis Cardinals legend Albert Pujols became the fourth member of MLB‘s 700-homer club on Friday night when he launched Nos. 699 and 700 against the Los Angeles Dodgers. Pujols can now be mentioned in the same breath as Barry Bonds, Henry Aaron, and Babe Ruth, the most prolific sluggers in Major League Baseball history.

The odds of Pujols reaching this pinnacle appeared slim back in the spring, when he signed a one-year deal to finish his career where it began. He was, after all, a 42-year-old whose recent statistical track record suggested he was best suited for short-side platoon work. Pujols didn’t improve his chances through the season’s first three months, either. He hit a pair of home runs in April and May, yet he failed to hit paydirt even once in June. A three-homer July put him back on track, but still left him 14 home runs short of 700 with only two months remaining in his season and career.

It’s been said that life finds a way, and so did Pujols. From August onward he’s performed like … well, his younger self. Over his last 43 games, he’s batted .306/.372/.694 with 14 home runs in 137 trips to the plate. Pujols has continued to do most of his damage against left-handed pitching, but the introduction of the universal designated hitter in conjunction with the Cardinals’ comfy lead in the National League Central has afforded him a steady stream of chances.

To honor Pujols’ accomplishment and nod at his turnaround, let’s break down his play this season and what it means for the Cardinals’ playoff hopes.

How Pujols has flourished

Again, this reads like a sentence ripped from an article from 2008, but Pujols’ success this year can be attributed to a combination of his contact chops and his strength.

To wit, Pujols entered Saturday with an in-zone contact rate of 89 percent, the 37th best among the 346 batters with at least 200 trips to the plate. Pujols’ 91.2-mph average exit velocity, meanwhile, was better than all but two of the batters ahead of him in in-zone contact rate: Yandy Díaz and Vinnie Pasquantino — and Pujols, for his part, hits the ball in the “sweet spot” launch-angle window more often than either.

Pujols’ performance uptick has, predictably, coincided with growth in the exit velocity department. As the chart above shows, he went from consistently posting average exit velocities in the 90-91 mph range to gaining extra oomph these past two months. That development could be tied, in part, to a philosophical shift. Take a look below and observe how he’s become more prone to hitting the ball in the air and to left field:

The enduring memory of Pujols will be as an all-fields hitter. That hasn’t been the case as of late. Rather, Pujols’ pull rate this season is within two percentage points of Joey Gallo, whose extreme pull tendencies have made him the go-to example of someone who could benefit from going the other way to counterbalance the shift.

Pujols has seen his share of overshifts, too, but they’re less prevalent as a righty batter. And they’re less effective when he’s putting the ball in the seats.

What does it mean for the Cardinals in the playoffs?

This is normally where we’d talk about sustainability and the like and warn against betting on a 42-year-old maintaining an MVP-caliber pace for long. The beauty of Pujols’ impending retirement is that none of that stuff matters. He has 10 regular season games and however many postseason contests remaining. Just about anything and everything can happen over that small of a sample, no matter the process.

If you’re the Cardinals, Pujols’ resurgence should provide them with renewed hope on those grounds that he could positively impact the postseason. That’s a welcomed outcome since the Cardinals are dealing with a compromised lineup and outfield: Dylan Carlson only just came off the injured list, and Tyler O’Neill is on it because of a strained hamstring. The Cardinals have to be thrilled with Lars Nootbar’s emergence, but it’s fair to write they could be in a better position with their lineup and their outfield if they could assure Carlson and O’Neill were hearty and hale before October.

Logically, it may seem silly to view Pujols as a potential counterbalance, let alone a plausible difference maker. But there’s still room for magic in this old sport, and he’s done well to demonstrate as much time and time again over the last two months.