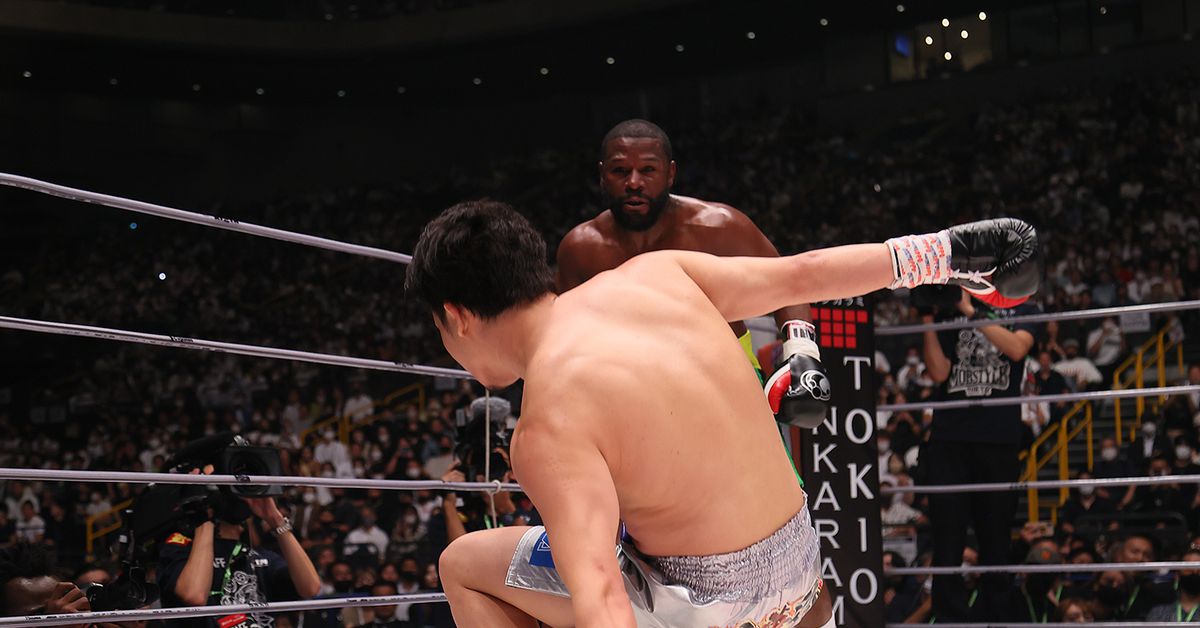 
Floyd Mayweather caught a few punches from Mikuru Asakura in Super Rizin’s headliner. But in the end, his speed and power were too much for the MMA veteran, and a two-punch combo brought the TKO at the end of the second.

“I’m just happy to be here, thanks again,” Mayweather said afterward. “I’m happy that we were able to give the fans excitement tonight. Thanks for having me. I’ll be back.”

Asakura did provide excitement in the three-round exhibition bout, cracking Mayweather with a few nice body shots and one straight right that rotated the undefeated boxer’s head. He chased Mayweather as the second round came to an end, trying to seal the deal.

Instead, he caught a left hook and right straight that sent him teetering to the mat. When he rose, he was wobbly on his feet, and ref Kenny Bayless waved off the fight at Saitama Super Arena in Saitama, Japan.

Mayweather immediately embraced his opponent, who challenged him in staredowns for the fight, drawing a shove from his bodyguard, Jizzy Mack, who in the co-headliner of Saturday’s pay-per-view wound up on the canvas after K-1 kickboxing vet Kouzi sent him there with a thundering shot.

Asakura came out swinging in the first, throwing power shots to the body and head. His shots were far less efficient than Mayweather, who deftly ducked out of the way as he’d done so many times against faster and more compact punchers.

Asakura threw his hands in the air after taking a body shot, challenging Mayweather’s power. When he took the first of several straight rights in the second, power didn’t matter so much as speed, which even at 45 “Money” retained.

With his thanks to the audience and promise of a return, Mayweather acknowledged his former rival Manny Pacquiao, who sat ringside after making a brief appearance before the main event. There was no face-to-face or callouts; Floyd was content with his fourth exhibition match and third clear victory (despite no scores submitted) with his exhibition against YouTuber Logan Paul a distant memory. For the second time, Mayweather flew overseas to Japan and cleaned up.