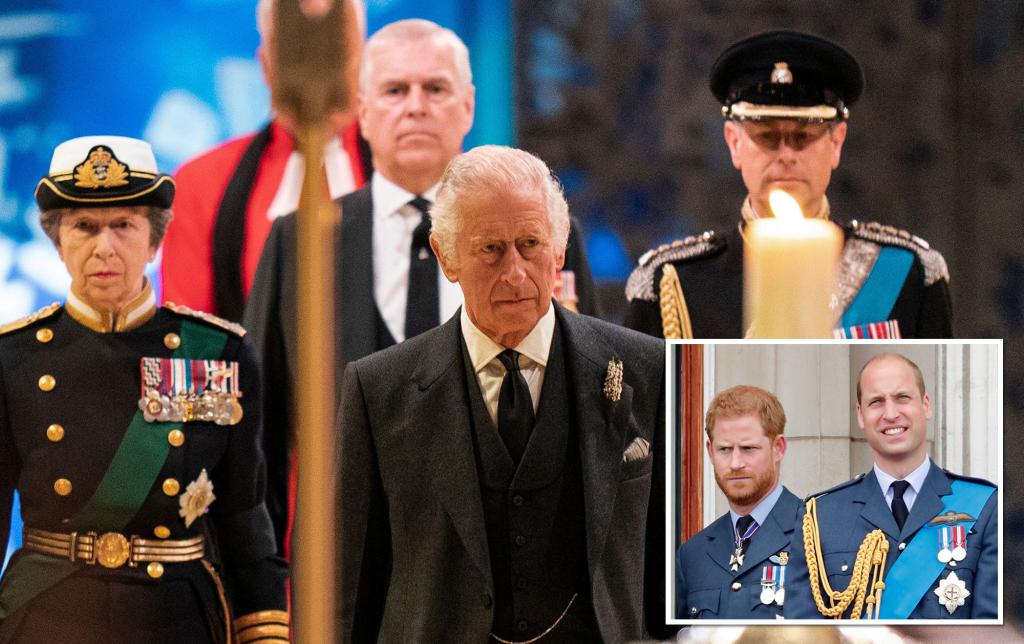 
Queen Elizabeth II’s kids will hold a vigil at their mother’s coffin on Friday evening as the UK continues to mourn ahead of the monarch’s funeral.

King Charles III and his siblings will stand guard for 15 minutes in military uniform – including disgraced Prince Andrew, who was granted an exception by his monarch brother to suit up despite having his royal duties stripped amid a sex scandal, Buckingham Palace has confirmed.

The king will be joined by Andrew, Princess Anne and Prince Edward for the somber event at Westminster Hall at the Houses of Parliament.

The royal siblings had stood vigil with their mother’s coffin at St. Giles’ Cathedral in Edinburgh, Scotland before the former monarch’s remains were transported to England earlier this week.

The Queen died at age 96 on Sept. 8 at Balmoral Castle in Scotland.

Charles granted permission to both Andrew and his son Prince Harry to wear military uniforms during their vigils. Harry’s military titles were dropped when he left royal duties and relocated to the US with his wife, Meghan Markle.

Harry will join his older brother and next in line to the throne, Prince William, and the Queen’s other grandchildren during their own 15-minute vigil Saturday as Elizabeth lies in state until her state funeral on Monday.

The UK will hold two minutes of silence at the end of the funeral at Westminster Abbey on Monday. All flights out London’s Heathrow Airport will be paused for 15 minutes before and after the moment of silence to avoid “noise disruption.”

The final goodbye to the long-reigning Queen is expected to be attended by more than 2,000 people including President Joe Biden. After a procession, Elizabeth is scheduled to be buried in a private ceremony at the King George VI Memorial Chapel alongside her late husband Prince Philip.