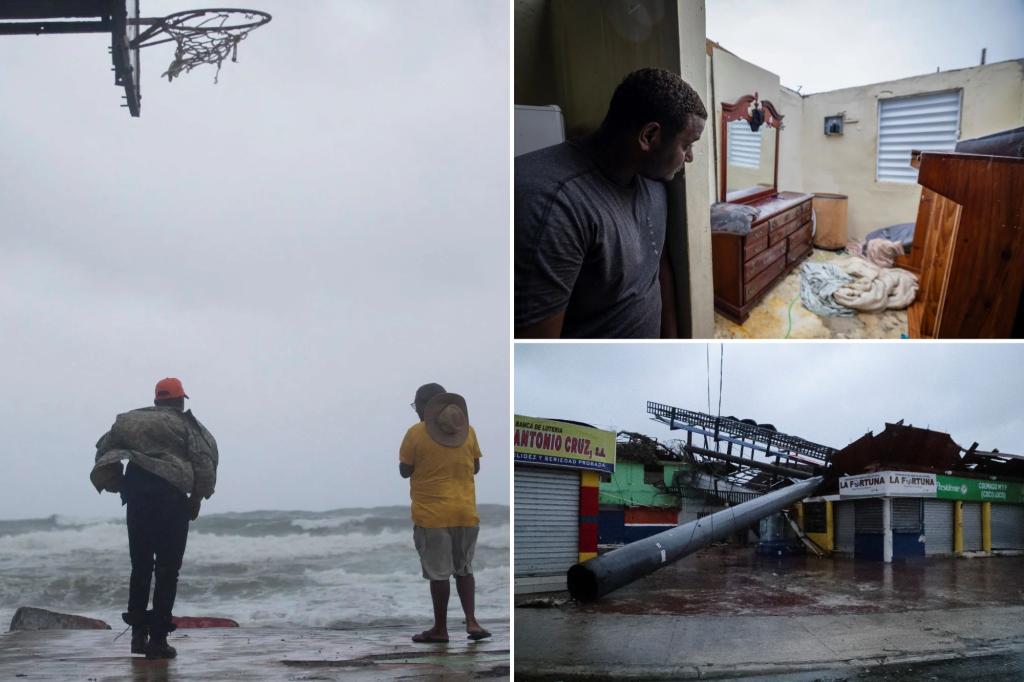 
Hurricane Fiona unleashed catastrophic damage and destruction as the deadly storm barreled across the Caribbean over the weekend before eventually making two landfalls in Puerto Rico and the Dominican Republic.

Major flooding caused by Hurricane Fiona’s torrential rain is being blamed for at least one death on the French Caribbean island of Guadeloupe, according to one local official.

The island’s Basse-Terre district was particularly hard hit, with at least one man being swept away to his death by raging floodwaters.

In a tweet, Puerto Rico Gov. Pedro Pierluisi confirmed the power grid failed. Crews have since been out working to make repairs in an attempt to get the grid back online.

As of Monday morning, about 100,000 customers had their power restored as the effects of Hurricane Fiona continued to be felt across Puerto Rico.

Hurricane Fiona made landfall in southwestern Puerto Rico near the town of Punta Tocon on Sunday at 3:20 p.m. Eastern, but the hurricane’s effects were felt across the entire island.

At landfall, Hurricane Fiona was a Category 1 hurricane with 85-mph winds, but gusts higher than 100 mph were reported as well.

However, the island’s residents began experiencing the effects of Hurricane Fiona well before the storm’s landfall.

Heavy rain led to major flooding across the region, as well as mudslides and landslides.

According to the FOX Forecast Center, several communities have reported rain totals higher than 2 feet.

Lago Cerrillos, which is to the north of Ponce, picked up more than 25 inches of rain in two days.

Other impressive rain totals over the past two days were reported in Beatriz, with 20.12 inches and 18.52 inches in Coamo.

Dramatic photos posted to Twitter by the Puerto Rico National Guard showed rescue attempts in areas of the island that had been ravaged by flooding.

The National Guard urged people in low-lying areas to evacuate the area and get to higher ground to escape the flooding.

One image also shows a man clinging to a cement pillar to prevent being swept away by the raging rapids. Another photo thankfully shows the unidentified man’s rescue.

Torrential rain also triggered a landslide near the island’s capital of San Juan.

No injuries were reported as a result, but local officials said the landslide swallowed a large fence, vegetation, a playground and part of a parking lot.

FOX Weather multimedia journalist Will Nunley was in Ponce, Puerto Rico, as Hurricane Fiona swirled by to the south and west.

“This is an ongoing emergency,” Nunley said while on the ground in Ponce. “We don’t even have a full scope yet of the true damage to this island. Because emergency crews by large have not been able to get out.”

Nunley said that he has been seeing reports that homes have been washed away and bridges collapsing.

In a video, residents and first responders could only watch helplessly as floodwaters destroyed a bridge in the community of Utuado, Puerto Rico.

That bridge was built five years ago after Hurricane Maria destroyed the original one in 2017, according to a tweet from Rep. Roberto Lefranc Fortuno.

Gov. Pedro Pierluisi held a news conference Monday morning to provide updates on the impacts that Hurricane Fiona had and is still having on the island.

Pierluisi said that, so far, 128 shelters have been opened across the island’s 78 municipalities. He said there are currently 2,146 people and more than 250 pets being helped in 113 of those shelters.

Shelters are available in the communities of Aibonito, Florida, Barceloneta and Hatillo, but so far no one has needed to take refuge there.

In addition, 1,000 people needed to be rescued in 25 municipalities, and rescues are continuing for people who have been trapped due to Hurricane Fiona’s effects.

Water service has also been severely affected by Hurricane Fiona.

According to Pierluisi, only 30% of Puerto Rico Aqueduct and Sewer Authority customers have water service.

Cleanup efforts are also underway across Puerto Rico even as the lingering effects of Hurricane Fiona remain.

Crews have been out in force working to remove debris that has littered roads and highways across the island.

Video shows moments leading up to Hurricane Fiona’s landfall in the Dominican Republic and as the storm roared ashore.

After making landfall in Puerto Rico, Hurricane Fiona also barreled toward the Dominican Republic and made landfall there early Monday morning.

Hurricane Fiona was slightly stronger for its second landfall in the Dominican Republic, with maximum sustained winds estimated at about 90 mph – still a Category 1 hurricane. The Punta Cana International Airport clocked a 79-mph wind gust near the time of landfall in the pre-dawn hours of Monday.

Video recorded in the Dominican Republic on Sunday and early Monday morning showed the fury of Hurricane Fiona’s winds as the storm spun closer to the island of Hispañiola.

In the video, you can see palm trees being whipped around by the ferocious wind, and the camera’s microphone picked up the roar of Hurricane Fiona’s powerful wind.

Hurricane Fiona brought strong winds and torrential downpours to the Dominican Republic when the storm made landfall on Monday morning.

That region sits on the country’s eastern coast and is a popular tourist destination for people around the world.

The roar of Hurricane Fiona’s winds could also be heard in another video posted to Twitter from Punta Cana.

The island, home to around 400,000 people, reported a wind gust over 50 mph and rainfall that reached over a foot as Hurricane Fiona trekked from the Atlantic into the eastern Caribbean.

Officials toured the damage on Saturday and said torrential rainfall caused waterways to spill out of their banks, and roadways were blocked by debris.

Photos from the island showed mud covering streets and damage to homes and vehicles.