PRINCES William and Harry walked side by side today as they followed the Queen’s coffin to her funeral.

The Duke of Sussex and the Prince of Wales were united in grief as they joined the solemn scenes this morning.

King Charles, 73, appeared sombre as he followed his late mother on a gun carriage to Westminster Abbey, where her funeral is being held.

He was accompanied by Queen Consort Camilla, along with the Prince and Princess of Wales and their eldest kids George and Charlotte.

Princes William and Harry followed their father in silent step, as they put their differences aside to say their final goodbyes to their grandmother.

Hundreds of thousands of mourners have lined the streets ahead of today’s emotional service – the climax of what has been described as the biggest security operation the UK has ever seen. 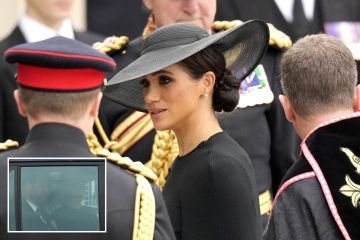 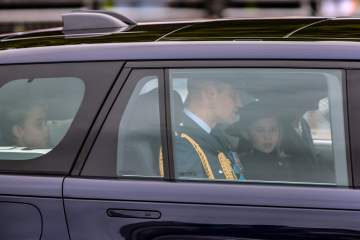 Some dedicated royal fans have even been camping out since Friday to bag the best spots – and by 9am, all public viewing areas along the procession route were full.

They are all hoping to catch one last glimpse of Her Majesty before she makes her way from London to Windsor to be reunited with her husband Prince Philip, who died last year aged 99.

Billions more are tuning in from pubs, cinemas, outdoor big screens, cathedrals and their living rooms across the globe to experience the once-in-a-lifetime event – expected to be the most watched broadcast of all time.