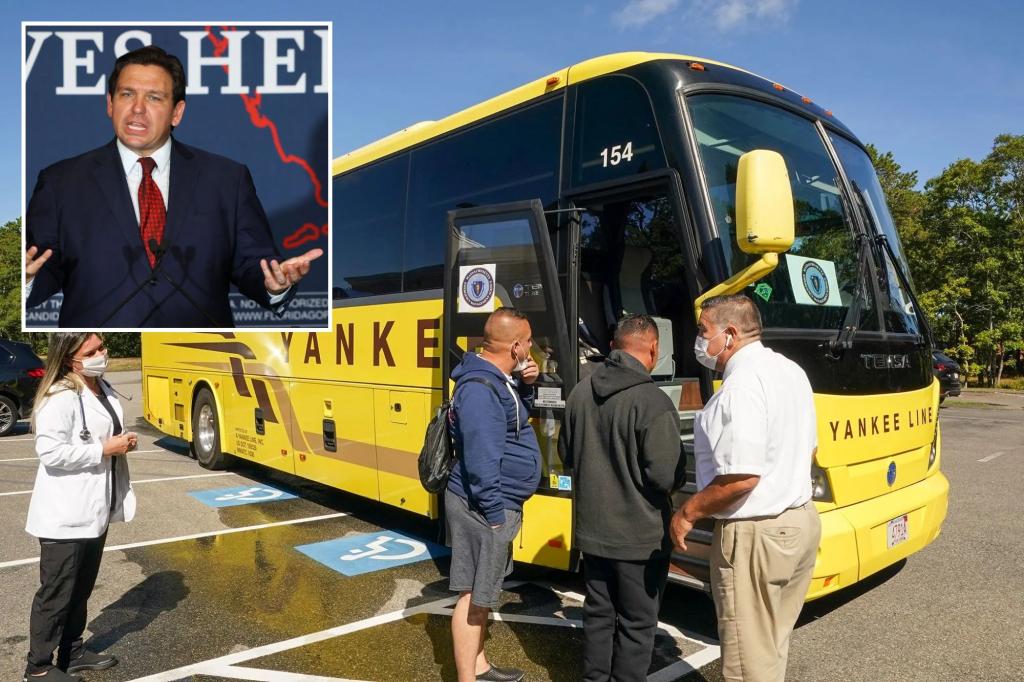 As Ron DeSantis points out, there were more journalists in Martha’s Vineyard last week than ever have gone to the southern border to report on the humanitarian catastrophe of Joe Biden’s open border.

It’s the ugly truth, to the eternal shame of American journalism.

The New York Times listed no fewer than 14 bylines on its hysterical Martha Vineyard coverage. The Washington Post featured six bylines on a single story.

DeSantis was declared “cruel,” “inhumane” and guilty of “human trafficking.”

But when it came to the hundreds of secret migrant flights the Biden administration has been sending in the dead of night from the southern border to White Plains airport in Westchester for at least 14 months, crickets.

As more than 8,500 illegal migrants flood over the border every day, Joe Biden has created a historic crisis with ramifications that will echo for generations. Yet it has been pretty much ignored by the mainstream media, with a few honorable exceptions, like Bill Melugin at Fox News.

That is, until DeSantis sent a single planeload of illegals to the elite stomping ground of Martha’s Vineyard, where 87% of people voted for Joe Biden. Naturally they had declared the island a “sanctuary” for illegals, but only theoretically. In practice, they freaked out, called in the National Guard and deported them as fast as they could off the island, into a military camp in Cape Cod.

President Biden branded the Florida governor “un-American” and “scrambled” to get his Cabinet together to stop more illegal aliens being relocated to Democrat sanctuary cities. Disgraced former FBI figures like Russiagate’s Andrew Weissman salivated about siccing the DOJ onto “cruel” DeSantis.

But what DeSantis did was not cruel. The migrants loved the Vineyard. What is cruel is luring millions of people from around the world to play Biden’s version of the Squid Game: a lethal journey where they have to place their lives and savings in the hands of vicious criminal people smugglers and child-raping cartel members for a chance of a future in America — by first breaking our laws.

What DeSantis did was not human trafficking, unless that’s what you also call what Biden has done flying illegals around the country after midnight to avoid bad optics at the border.

But now that national media attention is on the border, Republicans have an opportunity to exploit an issue where they have the most advantage over Democrats electorally, an issue which appalls decent Americans, and which is such a hot potato that the Dem-enabling media have buried it.

Republicans may not be able to help being outspent 10 to one by the party of Wall Street and Silicon Valley and the mega-rich, but they should be more proactive in using Biden’s failures against his party.

To the rescue comes Stephen Miller, former Trump adviser and founder of America First Legal, who has fashioned the ultimate razor-sharp strategy for the GOP.

With seven weeks to the midterms, Republicans can focus the attention of the country on Biden’s border crisis by staging a dramatic showdown in Washington DC over the federal budget.

The usual process would see Congress pass a stopgap measure known as a continuing resolution, or “CR,” this month to fund the government by maintaining or slightly tweaking spending levels for federal agencies. In December, after the midterms, Miller says the lame-duck Congress would then simply “ram through a full, year-long spending bill locking in every crisis afflicting the country, including the border.”

Even if Republicans were to win the House and/or Senate, the border crisis could not be resolved for at least a year, during which time an additional four million illegal migrants would cross the border.

Miller’s plan is for the GOP to refuse to pass the spending bill without an amendment to stop Biden releasing more illegal aliens into the United States.

Since spending bills are usually passed in the Senate by a backroom deal in which minority leader Mitch McConnell delivers 15 Republican votes to his Democrat counterpart Chuck Schumer, forcing the border amendment would require six of those 15 Republican senators to defy him.

“McConnell serves at their pleasure and if 26 out of 50 [GOP senators] want their will to be imposed they have the power. They should make clear to McConnell there should be no deal” without the border amendment, Miller says.

Next would be a vote on the amendment right before the midterms which would discomfit so-called Democrat “moderate” Senators such as Mark Kelly and Patty Murray.

“The media will be caterwauling about the imminent government shutdown which will increase attention on the fact that these far-left open-border Senate Democrats are not the moderates they pretend to be,” Miller says.

The last part of Miller’s plan is crucial. When Democrats refuse to support the border amendment, you offer them a way out of their pain before the midterms: they can pass a spending resolution which expires in February. This way the new Republican Congress will not be trapped into funding Biden’s border disaster.

This way, every Republican goes to the American people with a clear choice in November, says Miller.

“If Democrats control Congress, you will have two more years of open borders. If we control it, we will shut this [border disaster] down come February and save this country. You turn the election into a referendum on Biden’s border catastrophe.”

It’s astonishing that it took a former Trump official to articulate a coherent strategy to hang the border disaster around Biden’s neck along with every Democrat seeking election.

At a time of unprecedented villainy and incompetence from the Democratic-controlled Congress and White House, the Republican leadership seems to be floating in a sea of blancmange.

The latest NBC poll finds Republicans hold an all-time high advantage of 36 points over the Democrats on handling border security, followed by a 23-point edge on dealing with crime and a 19-point advantage on the economy.

The fact that the poll also shows that voters are split evenly in preferring Republicans or Democrats to control Congress is a shocking indictment of the GOP’s failure to seize the narrative that Biden has gifted them on a silver platter.

Miller has shown them the way.