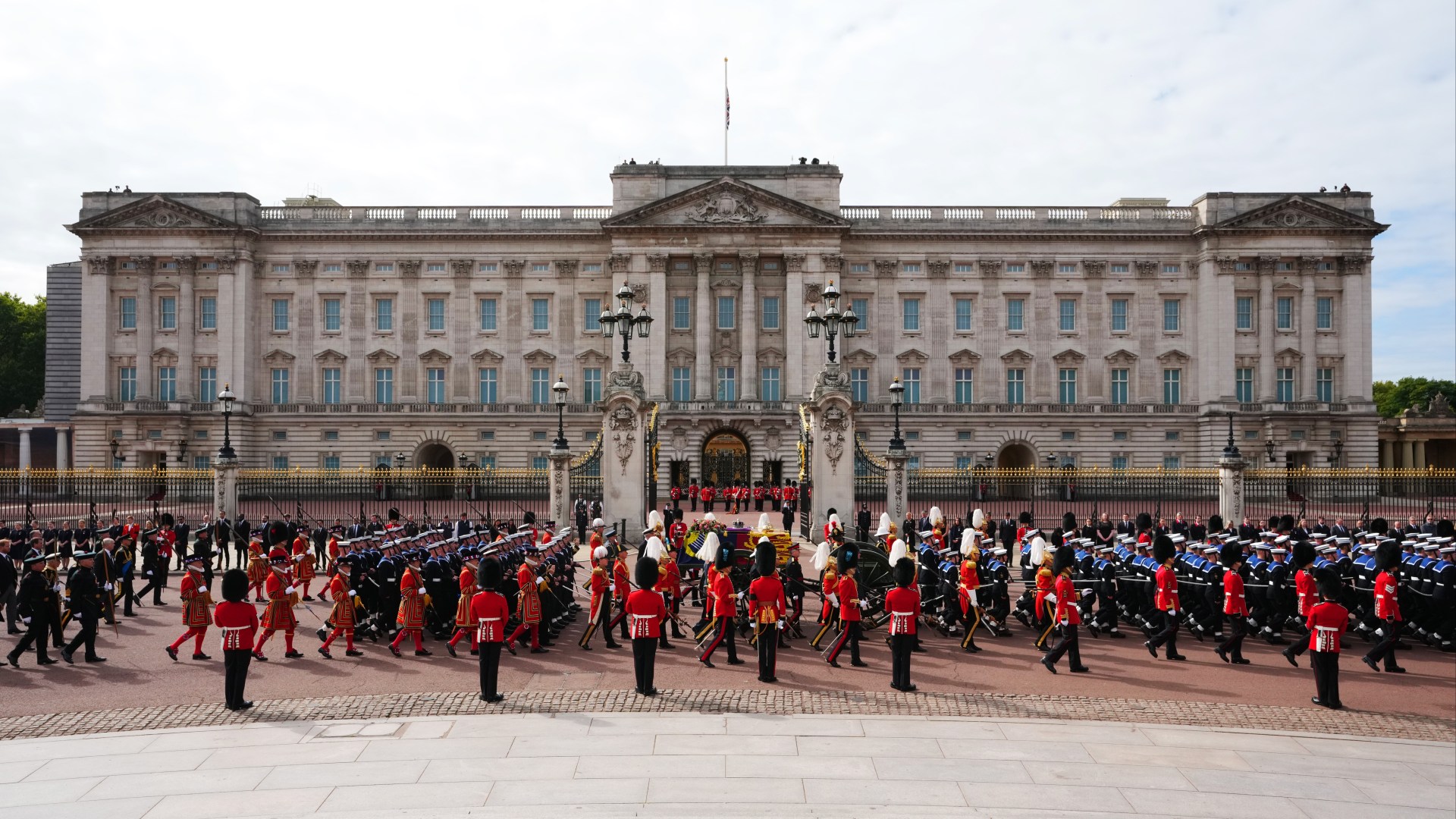 
IT MAY have been the greatest farewell in human history but it felt like a death in the family.

It was a strange day.

A national event, and global event — the most-watched spectacle in human history — and a day that will never be forgotten.

Not by those of us who witnessed it, not by generations yet to be born. Yet beyond all the pomp, pageantry and ancient ritual, it felt strangely personal.

Because this is what it feels like when you lose someone who can never be replaced.

It is what psychologists call a trigger of previous griefs. 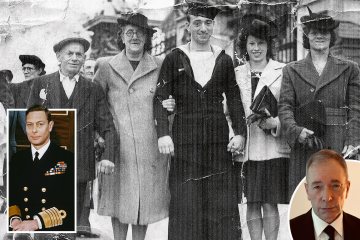 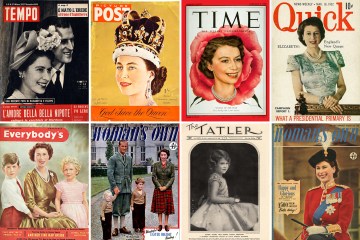 The September day carried with it the echo of other farewells to other loved ones.

And so although we had never seen anything like this day, the feelings it called up were familiar.

The national mood was one of pride, patriotism and gratitude for a Queen who served her country magnificently for 70 years.

But the sense of loss was everywhere.

History unfolded before our eyes. The spectacle was overwhelming.

The pomp, pageantry and precision. The stately pace of events, as if it was unbearable to say that final farewell.

The massed pipes and drums. The serried ranks of 142 Naval ratings pulling the gun carriage.

The heartbreaking choreography of seeing them remove their hats and bow their heads when their job was done and the gun carriage bearing the coffin had been carried to the doors of Westminster Abbey.

Where Elizabeth II was married, where she was crowned, where her coffin was borne.

How moving it all was.

George and Charlotte, her tiny great-grandchildren, in the black of mourning for their beloved “Gan-Gan”.

The lone piper playing Sleep Dearie Sleep on his bagpipes at the end of the service. Westminster Abbey looking and sounding like heaven’s waiting room.

The statue of Winston Churchill, Elizabeth’s first Prime Minister, gazing down on the funeral procession of his young Queen as she was carried through London for the last time.

The sense of loss was everywhere

The Standards lowered at the Cenotaph as the coffin passed by the memorial for our glorious dead.

The Union Jacks the length of The Mall, fluttering above the redcoats and bearskins, the arms reversed in mourning, the Mounties and Gurkhas, the Kiwis and Aussies, and the royal parks still green with the end of her summer.

The drive home to Windsor and her last resting place with family and her beloved Philip.

We have seen nothing like it before and I reckon we will see nothing to match it again, not in this lifetime.

Here was the weight of one thousand years of history, and seven decades of service.

The world leaders and assorted royals were all supporting players today, all bit-part actors and actresses next to the biggest star in the world, a monarch who has been there for ever, the greatest head of state in history.

A day that left us, in the words of our new King, moved beyond measure. The day of the funeral is when it hits you. You will never see that smiling face again.

For all the historical significance, this felt personal.

We buried our Queen, the one golden thread that kept this often bitterly divided United Kingdom together, the living silhouette of our island story, the incarnation of our nation’s soul, the focus of our collective memory.

Our rock, our anchor, our still centre of goodness in an ever-changing world.

And it felt like a death in the family.

It was a day of dignity, formality and raw emotion. Because, from The Blitz when the bombs fell on Buckingham Palace to the Covid pandemic when she sat isolated and masked at her husband’s funeral, she was one of us.

This Queen suffered when her people suffered. And, from walking the corgis with James Bond to taking tea with Paddington Bear, she shared in the good times too.

She lived in palaces and yet she was the grandmother to the nation — wise and kind, her love and commitment unconditional and unflagging.

And look at the faces of those weeping crowds. They mourned for a monarch who meant the world to them.

The great and the good crammed the pews of Westminster Abbey but the paradox is that most famous woman in the world always had an aura of disarming ordinariness about her.

With her careful hairdo, her hats and handbags, how could she not remind us of a mother or grandmother, someone truly beloved?

And how is it possible that we will never see her again?

It was the most spectacular goodbye in history.

It was a day to remember who she was — and who we are.

The crowds came from every age group, every race, every faith — and none.

Our people. Her people.

Perhaps we are not the racist hellhole we are cracked up to be by our detractors (some of them in the Royal Family).

Perhaps, as the Queen has always insisted, we are not so very different from the generations who came before us.

It was a day when pomp, pageantry and tradition — all those things the British do so brilliantly — was leavened with raw feeling.

She embodied those old-fashioned virtues — stoicism, kindness, a quiet courage, modesty, restraint and, always, a sense of humour.

Perhaps the astonishing levels of mourning have taught us that the things the Queen stood for are not so old-fashioned after all. They are eternal. And worth aspiring to.

She was our country’s still centre of continuity, decency and duty for an astonishing 70 years.

They do not make them like Queen Elizabeth II any more.

You suspect they never will.

She was a woman of deep and abiding and profound religious faith, and you felt that today, from Westminster Abbey to Wellington Arch to the final farewell at Windsor.

Although the country became more secular during her 70-year reign, she never stopped believing.

Her Christianity was at the heart of who she was, and her goodness, and her genius for reconciliation and forgiveness.

She leaves an astonishing legacy. Did she choose to die in Scotland, in her beloved Balmoral? It seems far beyond coincidence.

The greatest monarch in a thousand years

She has secured the Union for another hundred years and, with those 70 years of faultless leadership, she has ensured the survival of the monarchy for generations.

She died in the week that Vladimir Putin shook hands with Xi Jinping and reminded us that a monarch prevents all manner of monsters and mediocrity rising to the top.

Like the rainbow above Buckingham Palace on the day she left us, the timing was perfect.

And as you watched the 142 sailors pulling the gun carriage with her coffin, the mind still reeled with the jolt of disbelief. How can the death of a 96-year-old woman come as such a shock?

Because for most of her people, she was there for ever.

And now she is gone, and it dawns on us that we will never see that face again, nor the slow smile, those eyes that always seemed to twinkle with gentle amusement.

You can be grateful she was our Queen, you can feel blessed and lucky that fate gave us her for a lifetime.

Future generations will have their minds boggled by the length of her reign — her first Prime Minister was born in 1874 her last in 1975.

But only when you saw her coffin did you truly understand you would never see her again in those sensible clothes of bright, primary colours — all the better for her people to see her.

So much pride. So much to be thankful for. But the overwhelming sadness of this day was unavoidable.

Did we expect her to live for ever? I think we all expected her to live as long as her mother — 101 — but it was not to be.

This bleak heartbreaker of a day was always going to shake us up.

A spectacle that will never be forgotten, a day that will burn itself into the collective consciousness of this country and the world.

But what I suspect we will remember most of all is just how sad it was to say goodbye to our Queen.

A nation’s heart was breaking on the day we buried our Queen.

The streets of the old city were full of pomp and pageantry like we have never seen in our lifetimes. 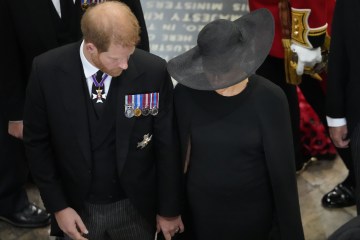 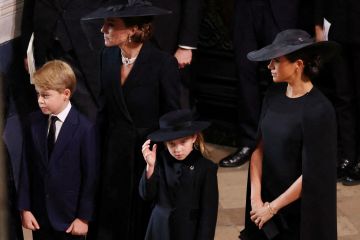 But most of all they were full of love and grief.

And grief, as our Queen once reminded us, is the price that we pay for love.