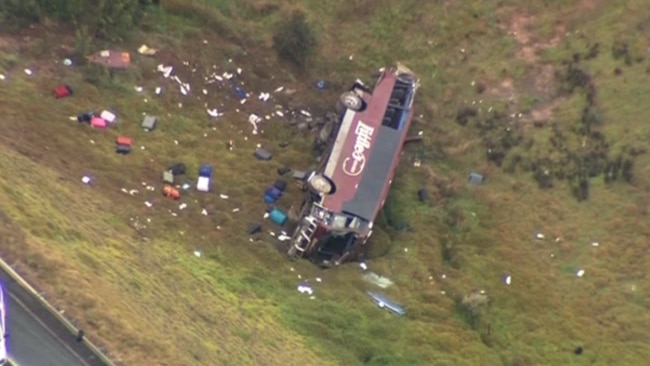 More than two dozen female students have been rushed to hospital after a school bus flipped onto its side and rolled down an embankment after colliding with a truck.

The collision happened at the Victorian town of Bacchus Marsh, about 50 kilometres north-west of Melbourne, on Wednesday at 3:15am on the Western Highway, near the intersection of Condons Lane.

The teenage girl was airlifted to Royal Children’s hospital with serious injuries while the truck driver was taken by ambulance to Royal Melbourne in a similar condition.

The bus carrying a total of 27 female students, four adults, and the bus driver, were taken to different hospitals in the city with various minor injuries to their bodies.

It’s believed the groups were either returning or were on the way to a school trip when the accident happened.

All are lucky to be alive after serial footage of the crash site showed the bus severely damaged with windows blown out and suitcases scattered across the terrain.

The cabin of the truck was also a crumbled mess parked just off the highway.

Commuters have been told to avoid the area and find an alternate route as the city-bound Western Highway lanes will remain closed for several hours.

Traffic is already beginning to build and has slowed.

Parents who are concerned about their children are told to not attend the scene but to call Ballarat Police Station on 5336 6000.

Police are investigating the circumstances of the crash. Witnesses or drivers with dash cam footage are urged to contact Crime Stoppers on 1800 333 000.

This is a developing story. MORE TO COME.