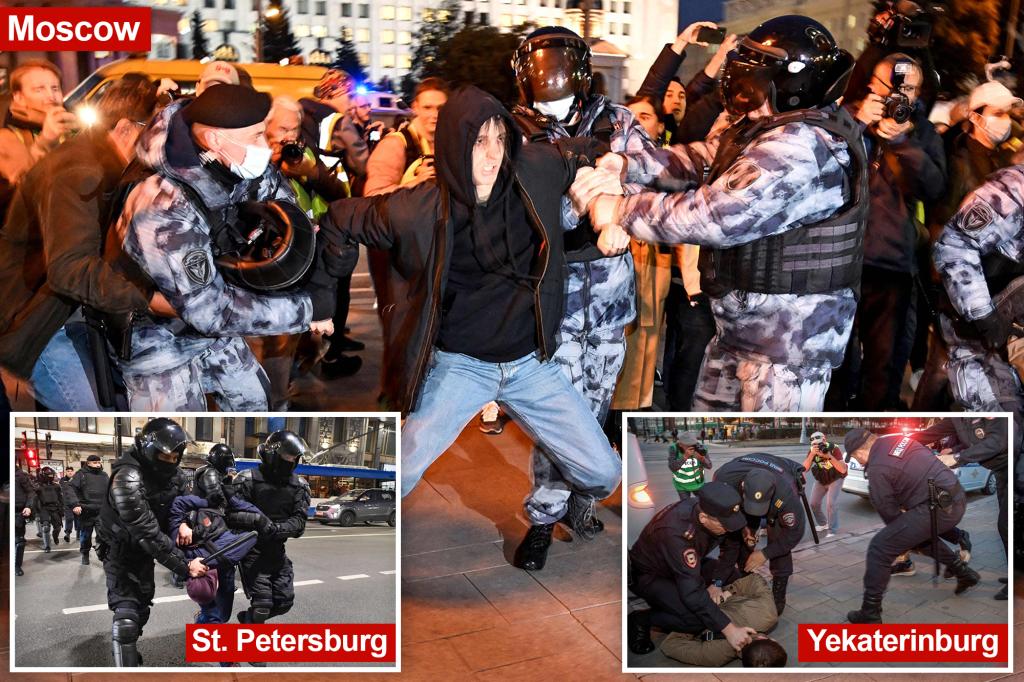 
Russians took to the streets — and to the sky — Wednesday in opposition to Vladimir Putin’s mobilization order sending reservists to fight in Ukraine as his threats of nuclear warfare intensified.

The order — which would throw 300,000 more troops into the increasingly desperate fight — sparked a wave of protests across Russia and a run on one-way tickets out of the country.

The mobilization came alongside chilling threats to defend Russian territory with Nuclear weapons, as the Kremlin planned to call a quarter of Ukraine part of Russia.

“I want to remind you that our country also has various means of destruction,” Putin said in a Wednesday morning televised address. “When the territorial integrity of our country is threatened, to protect Russia and our people, we will certainly use all the means at our disposal.”

With an icy stare at the camera, the Russian strongman added, “It’s not a bluff.”

Putin’s threat to use nuclear weapons to defend Russia’s “territorial integrity” comes as his puppet regimes in Ukraine prepare to declare the occupied parts of that country Russian territory.

Four referenda are planned this week for the occupied provinces of Ukraine — Luhansk, Donetsk, Zaporizhzhia and Kherson — to declare those provinces part of Russia.

Such a vote would make the territories an “irreversible” addition to the country, allowing Moscow to use “any means” to defend them, Dmitry Medvedev, head of the Kremlin’s Security Council, said this week.

“Encroachment onto Russian territory is a crime which allows you to use all the forces of self-defense,” Medvedev added on the messaging app Telegram.

The votes, scheduled to start Friday, have already been declared illegitimate by Ukraine and its Western allies.

Russia’s use of so-called filtration camps to relocate Ukrainians within the occupied territories — and it’s alleged use of torture, captivity and extrajudicial executions against those it suspects of supporting or aiding Kyiv — undercut the notion that any referendum held in occupied territory could reflect the will of the residents.

He lambasted the Russian leader for “making irresponsible nuclear threats,” adding that a “nuclear war cannot be won, and must never be fought.”

Putin’s announcements sparked panic in Russia, with a wave of protests breaking out across the country.

More than 1,300 Russians had been arrested for protesting the mobilization order as of Wednesday night, Russian police watchdog OVD-Info said. Protests against the war are illegal under Russia’s draconian anti-demonstration laws which prohibit the spreading of so-called false information about the military.

The first protests took place in Siberia in the Russian far-east, according to The Moscow Times. Most of the Russian forces sent to Ukraine so far have been pulled from Russia’s far-flung rural regions and satellite states, in an apparent effort to shield the Russian middle class from the costs of the conflict.

A mass mobilization of troops has been considered such a political minefield that Russian Oligarch and Putin ally Yevgeny Prigozhin has been trying to recruit prisoners to fight in Ukraine — with little success.

Prigozhin, who is widely believed to be the money behind the brutal Russian mercenaries of the Wagner Group, was seen in a leaked video last week trying to recruit inmates at a penal colony in the Mari El region of Russia.

“Our information indicates that Wagner has been suffering high losses in Ukraine, especially and unsurprisingly among young and inexperienced fighters,” a senior US defense official told Reuters when asked about the video.

In the footage, a man can be heard telling the inmates that those who survive a six-month tour in Ukraine will be granted clemency. Deserters, the man said, would be shot on site.

Ordinary Russians made a run on the airports, Wednesday, where the price of one-way tickets out of Russia skyrocketed.

Tickets from Moscow to Belgrade, Serbia, sold out, as did flights to locations in Turkey, Georgia and Armenia, according to Belgrade-based anti-war group “Russians, Belarussians, Ukrainians and Serbs Together Against War.”

“All the Russians who wanted to go to war already went,” the group tweeted. “No one else wants to go there!”