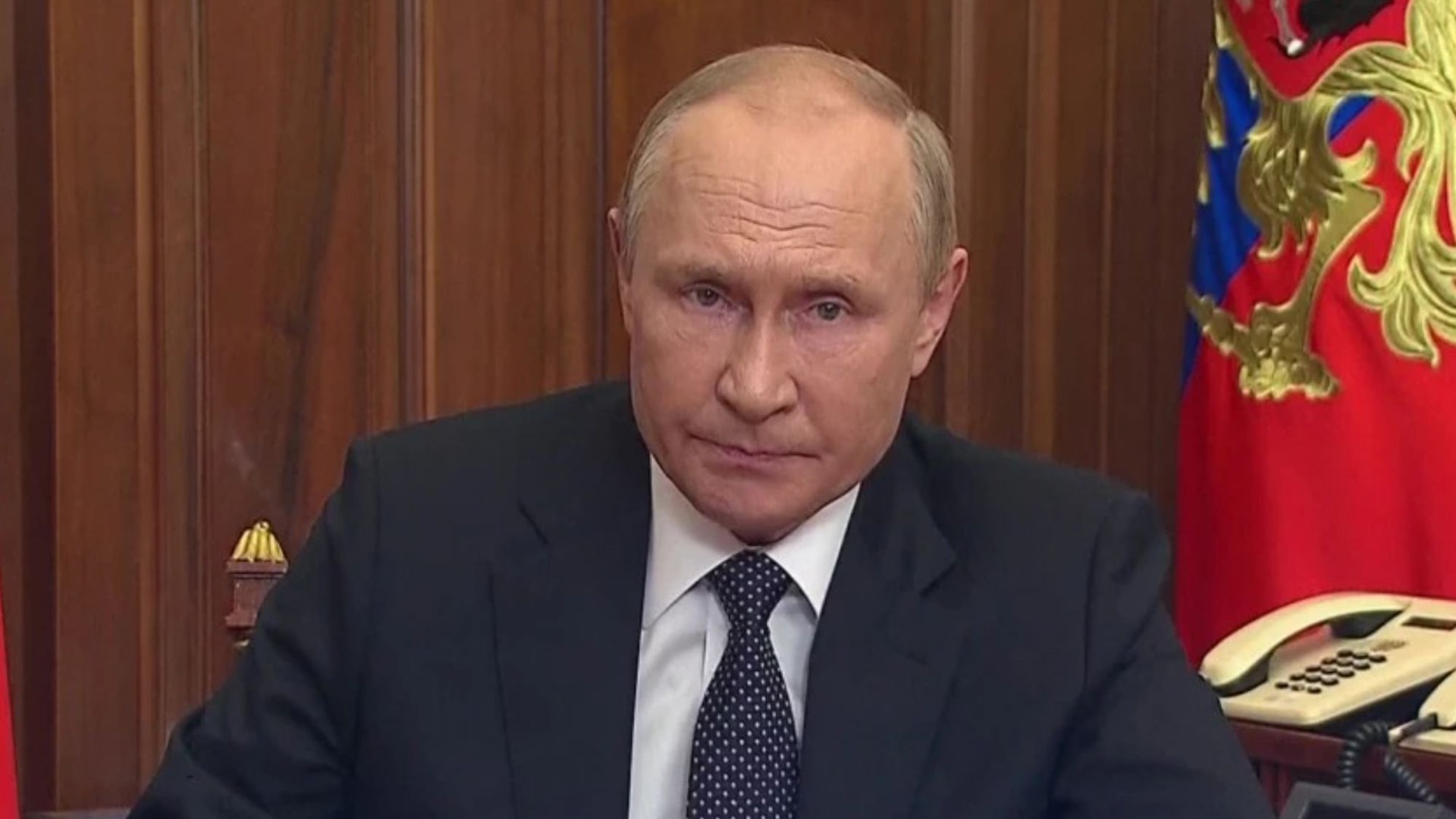 
AN unhinged Vladimir Putin has made a thinly-veiled threat to NUKE the West and declared he’s “not bluffing” in a chilling address.

The deranged Russian tyrant said he had “lots of weapons” he was prepared to use against the West, which he falsely accused of “nuclear blackmail”.

Putin also announced a partial military mobilisation of Russian troops and conscripts, which is being viewed as an escalation of war in Ukraine.

In a chilling speech, he issued a warning as he told the west, “I have lots of weapons – this is not a bluff.”

Putin has said that a decree on “partial mobilisation” has already been signed.

He said: “I stress it is partial mobilisation. Only those who are in reserve will be conscripted.”

Putin also claimed Western countries are trying to “block” any independence and development.

“In order to force their will in brutal ways to other people. The aim of the West is still weaken and destroy, they are openly saying that.”

Last night he mysteriously cancelled a speech in which he was expected to order a full mobilisation of the country’s military.

The tyrant was due to give what would have been biggest speech on the Ukraine war since he ordered the invasion of the neighbouring country in February but cancelled at the last minute.

Putin had been due to address the Russian people at around 8pm Moscow time but he failed to appear.

Kremlin insider Sergei Markov then announced on the Telegram social media platform just over two hours after Putin was due to speak that his address was “postponed until tomorrow”.

“The longer President Putin’s already announced speech is delayed, the more serious announcements it will contain,” added the political scientist, who is a former close advisor to Putin.

Pro-Kremlin propagandists then followed suit on Telegram, telling followers their wait for his speech had been in vain and it was time to call it a night.

Reports say Putin will now address the Russian people at either 8am or 9am on Wednesday morning.

As the time ticked by, General Sir Richard Shirreff, the former NATO Deputy Supreme Commander, said the delay smacked of chaos behind the scenes.

“We saw it announced that it was going to be at 8 o’clock Moscow time,” he told Englishheadline.

“We’ve just seen a tweet from RT to say it’s not going to be on at 8 o’clock Moscow time – and anyway that has now passed.

“So this says to me there is a certain amount of chaos.”

He said NATO must remain firm in the face of Putin using any speech an announce a full mobilisation.

“The bottom line though for the international community, and NATO in particular, is that we must not blink, and as the Ukrainian foreign minister said so clearly, it’s an act of desperation,” he said.

“If Russia sticks its head above the parapet, NATO will knock it off.”

It comes as pro-Russian authorities in the Donbas revealed they will hold referendums on joining Russia this week.

These referendums would be highly unlikely to be free and fair, according to international observers.

If these territories vote to join Russia, it would give Putin the justification to launch a full invasion of the region.

He would also be able to station his fearful nuclear arsenal in Ukraine, as he would claim the territory as part of his own country, further escalating tensions of an apocalyptic strike.

Even before Putin’s announcement, the United States condemned what it called “sham” referendums and said it wouldn’t recognise the results.

“These referenda are an affront to the principles of sovereignty and territorial integrity that underpin the international system,” said White House National Security Advisor Jake Sullivan.

“If this does transpire, the United States will never recognize Russia’s claims to any purportedly annexed parts of Ukraine.”

And NATO secretary-general Jens Stolrenberg said: “Sham referendums have no legitimacy and do not change the nature Russia war of aggression against.

“This is a further escalation in Putin’s war. The international community must condemn this blatant violation of international law and step up support for Ukraine.”

Full mobilisation of Russia would mean the potential of pulling up to two million reservists for Vlad’s military operation in Ukraine.

Ahead of the speech, the country’s parliament passed a new law bringing in stricter punishment for soldiers who refuse to fight.

Unconfirmed reports claim that all fighting-age men between the ages of 18 and 65 will be banned from leaving Russia and the occupied territories in Ukraine from midnight Wednesday morning.

Russian state media publication RBC said that Putin will speak on Tuesday “regarding referendums in the territories of the LPR, DPR, Kherson and Zaporizhzhia regions”.

The publication added that “what exactly the head of state will say is unknown”.

It comes as Simonyan claimed that the country is on the brink of a nuclear war.

“Judging by what is happening and still about to happen, this week marks either the eve of our imminent victory or the eve of nuclear war,” she wrote on Twitter.

Putin is expected to speak about the planned referendums in the southeastern Ukrainian regions of Donetsk, Luhansk, Kherson, and Zaporizhzhia.

These four states form a land corridor between Ukraine’s eastern border with Russia and the annexed territory of Crimea, which Vlad’s army seized in 2014.

Under their proposals, people will be asked if they want to become part of Russia.

The last time Putin made such an address to the nation was on February 24 on the eve of war, when he announced Russia’s “special military operation” in Ukraine.

His under-fire defence minister Sergei Shoigu had been expected to join him for tonight’s announcement.

News of the unexpected address comes just hours after pro-Russian separatists in the Donetsk and Luhansk People’s Republics announced they will hold referendums on joining Russia this month.

Both regions in eastern Ukraine are expected to hold votes between September 23 and 27.

A similar scheme in 2014 saw the Kremlin lay claim to occupied Crimea.

Putin ally Dmitry Medvedev, who served as Russia’s president between 2008 and 2012, bragged that the votes would alter the geopolitical landscape in Moscow’s favour forever.

He said: “Encroachment into Russian territory is a crime and if it is committed, that allows you to use all possible force in self-defence.

Experts warned the votes raised the risk of nuclear war – because Russian nuclear doctrine allows the use of its nukes to defend the motherland.

It comes as Putin’s army faces a battlefield reversal in much of northeastern Ukraine, which may have forced him to make one final throw of the dice and consolidate his gains in the southeast of the country.

If he loses control of Crimea, his position would be even more vulnerable.

Ukrainian intelligence has warned this week that Putin’s propaganda may be preparing the people for full mobilisation in Ukraine.

Major General Vadym Skibitskyi from Ukraine’s Ministry of Defence told the Kyiv Post: “Today we have started collecting information; this mobilisation-related information rhetoric in the Russian Federation has greatly increased.”

He added that Russian politicians were claiming that “the Russian army cannot cope, it is necessary to declare war and mobilise”.

Skibitskyi said that “there may be support for general mobilisation in Russia”.

In recent days, Putin’s close allies have urged him to mobilise the nation, which could add an additional two million soldiers to Vlad’s army.

Putin has been unable to mobilise Russia’s reserves because he refused to declare war on Ukraine, insisting his invasion was special military operation.

He could also row back on a promise – which has already been broken – not to send conscripts to the front.

At least 25,000 Russian soldiers have been killed in action in Ukraine with another 55,000 injured, captured or lost to desertion, Defence Minister Ben Wallace said.

The struggle to generate cannon fodder was exposed by a Russian mercenary leader Yevgeniy Prigozhin telling convicts in a prison yard: “If you serve six months (in Wagner), you are free.”

But he added: “If you arrive in Ukraine and decide it’s not for you, we will execute you.”

Warlord Ramzan Kadyrov, leader of Chechnya, called last Thursday for every Russian provincial leader to pull together 1,000 volunteers to join the fight.

However, it’s been assumed in the West that Putin would only turn to general mobilisation as a last resort, as this would make the war unavoidable for ordinary Russians, and could galvanise opposition.

Dr Mike Martin, a Visiting Fellow at the Department of War Studies at King’s College London wrote on Twitter: “Mobilisation in Russia doesn’t solve anything. It takes months and months to turn civilians into soldiers.

“Russia needs soldiers yesterday, not in six months. It also doesn’t solve their equipment problems nor their logistic problems.”

“Russia is scraping for personnel,” he said. “These are not the actions of a confident country. These are not acts of strength.”