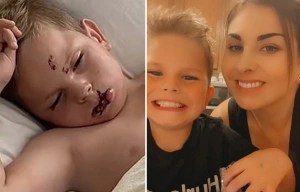 
AN EIGHT-year-old boy has been left with horrific injuries after he was mauled by a dog at an unlicensed home daycare center.

Connor Aranda was viciously attacked by a Labrador Retriever in Apple Valley, California, on Tuesday.

He suffered serious injuries to his chest, face, back and arm when the dog launched the vicious attack on the schoolboy.

Connor was forced to undergo emergency reconstructive surgery – which has left him unable to speak and in agonizing pain.

His devastated mom, Michelle Aranda, told Newstar’s KTLA News her son has several more procedures ahead of him too. 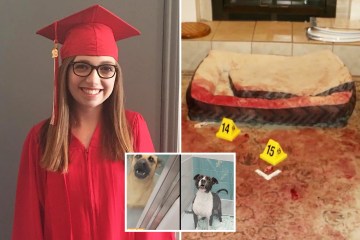 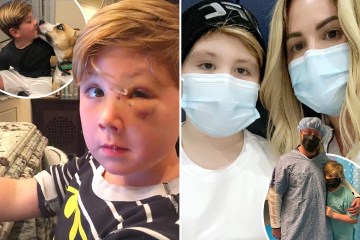 Describing his injuries, she said: “‘There are stitches inside of his mouth, on the top, on the top lip.

“His chest had a five-inch laceration that was about a quarter-inch deep. He’s just so sad. He doesn’t want to do anything or even get out of bed.”

Connor had been at the home of an unlicensed daycare provider when the dog pounced on him.

There are currently no charges pending against the unnamed owner, but Michelle is considering taking legal action.

The distraught mum added: “‘I trusted her, trusted that he was safe there, that all my kids were safe there.”

Connor’s six-year-old sister is also said to have witnessed the brutal attack on her older brother.

According to reports, the state’s Department of Social Services said the license application for the home daycare was pending.

The Labrador was seized from the home by San Bernardino Animal Care, who are investigating the incident, before being euthanized.

Connor’s grandmother Laura Kemp told reporters of the moment she was informed of the gruesome incident.

She said: “I received a call from my daughter that Connor was attacked by a dog while at daycare. I raced to pick her up from work.

“My daughter was completely devastated, shaking in absolute fear of the worst.”

Laura explained the eight-year-old will need several more surgeries and grueling physical therapy to aid him on the road to recovery.

She said the incident was “completely unavoidable” and added it was “heartbreaking” to see her grandson in pain.

A GoFundMe has been launched in hopes of helping Connor and his loved ones with medical costs.

It says: “Connors’s mother is a single mother that works full time. She has 2 younger children at home that also rely solely on her.

“We would like to raise money so Connor’s mom does not have to worry about lost wages and mounting bills.