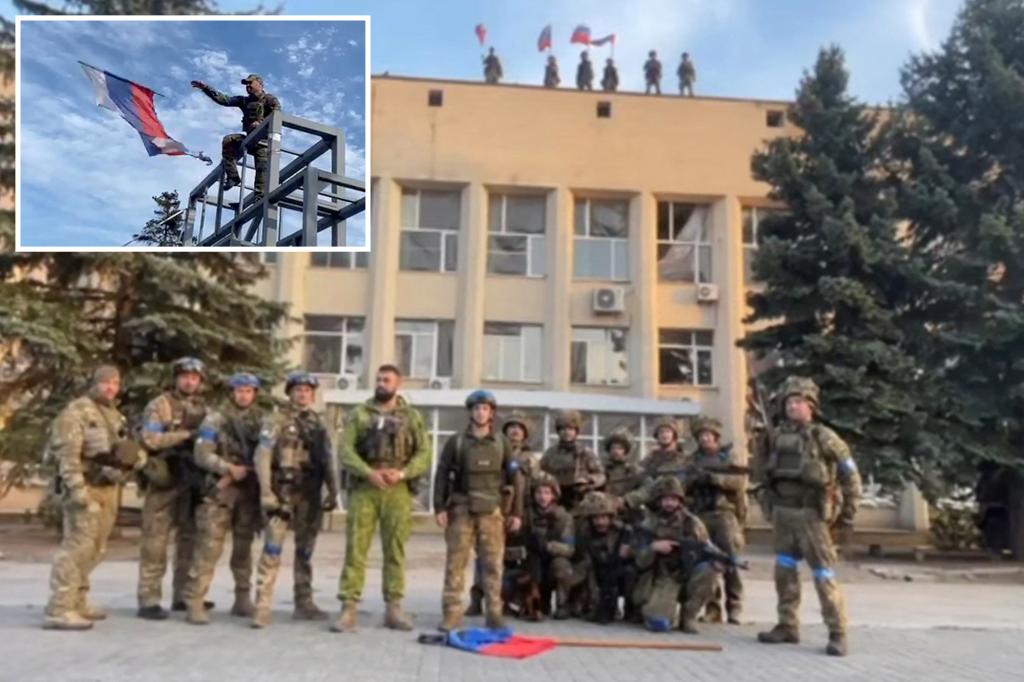 The stinging setback for Russian President Vladimir Putin was delivered after he proclaimed the annexation of four regions covering nearly a fifth of Ukraine on Friday, an area that includes Lyman. Kyiv and the West have condemned the proclamation as an illegitimate farce.

NATO Secretary General Jens Stoltenberg said the capture of the town, where Ukrainian flags were raised over civic buildings on Saturday, demonstrated that Ukraine was capable of dislodging Russian forces and showed the impact Ukraine’s deployment of advanced Western weapons was having on the conflict.

Ukrainian President Volodymyr Zelensky said the success of the country’s soldiers was not limited to Lyman.

Ukraine forces had liberated the small Arkhanhelske and Myrolyubivka settlements in the Kherson region as well, he said.

Ukraine’s Interfax agency reported that according to Serhiy Cherevatyi, spokesman for the Ukrainian Eastern Group of Forces, Ukraine’s forces recaptured Torske, a village in the Donetsk region, about 15 km (9 miles) east of the now liberated Lyman.

Reuters was not able to immediately verify the reports.

Russia’s defence ministry said on Saturday it was pulling troops out of the Lyman area “in connection with the creation of a threat of encirclement”.

It did not mention Lyman in its daily update on Sunday, although it said Russian forces had destroyed seven artillery and missile depots in the Ukrainian regions of Kharkiv, Zaporizhzhia, Mykolaiv and Donetsk.

Russian forces had captured Lyman from Ukraine in May and had been using it as a hub for its operations in the north of the Donetsk region. Its recapture by Ukrainian troops is Russia’s largest battlefield loss since Ukraine’s lightning counteroffensive in the northeastern Kharkiv region in September.

Control over Lyman could prove a “key factor” in helping Ukraine reclaim lost territory in the Luhansk region, the full capture of which Russia announced in July after weeks of grinding advances, Luhansk governor Serhiy Gaidai said.

Lyman’s operational importance was due to its command over a crossing of the Siverskyi Donets River, behind which Russia has been attempting to consolidate its defences, Britain’s Ministry of Defence said.

“Thanks to the successful operation in Lyman we are moving towards the second north-south route … and that means a second supply line will be disrupted,” said reserve colonel Viktor Kevlyuk at Ukraine’s Centre for Defence Strategies think tank.

“In that case, the Russian group in Luhansk and Donetsk could only be supplied strictly through (Russia’s) Rostov region,” Kevlyuk told media outlet Espreso TV.

Ukraine’s military said early on Monday Russian forces had used missiles, air strikes and artillery in attacks on 35 settlements in the previous 24 hours. Ukraine’s air force had attacked a command post, weapons caches and an anti-aircraft missile complex, as well as bringing down one helicopter, one attack aircraft and eight drones, it said.

The governor of the Zaporizhzhia region, said Russian forces had attacked Zaporizhzhia city and nearby villages overnight, with at least 10 missiles.

Reuters could not independently verify the battlefield reports.

The areas Putin claimed as annexed just over seven months into Russia’s invasion of its neighbour – Donetsk and Luhansk plus Kherson and Zaporizhzhia in the south – are equal to about 18% of Ukraine’s total surface land area.

Russia’s parliament is to consider on Monday bills and ratification treaties to absorb the regions, the speaker of Russia’s lower house of parliament, Vyacheslav Volodin said.

A pomp-filled Kremlin signing ceremony with the regions’ Russian-installed leaders on Friday failed to stem a wave of criticism within Russia of how the military operation is being handled.

Putin ally Ramzan Kadyrov, the leader of Russia’s southern Chechnya region, on Saturday called for a change of strategy “right up to the declaration of martial law in the border areas and the use of low-yield nuclear weapons”. The United States says it would respond decisively to any use of nuclear weapons.

Other hawkish Russian figures on Saturday criticized generals and Defense Minister Sergei Shoigu on social media for overseeing the setbacks but stopped short of attacking Putin.

Pope Francis on Sunday made an appeal sto Putin to stop “this spiral of violence and death” in Ukraine and also called on Zelensky to be open to any “serious peace proposal”.

Zelensky said on Friday that peace talks with Russia while Putin was president would be impossible. “We are ready for a dialogue with Russia, but with another president of Russia,” he said.