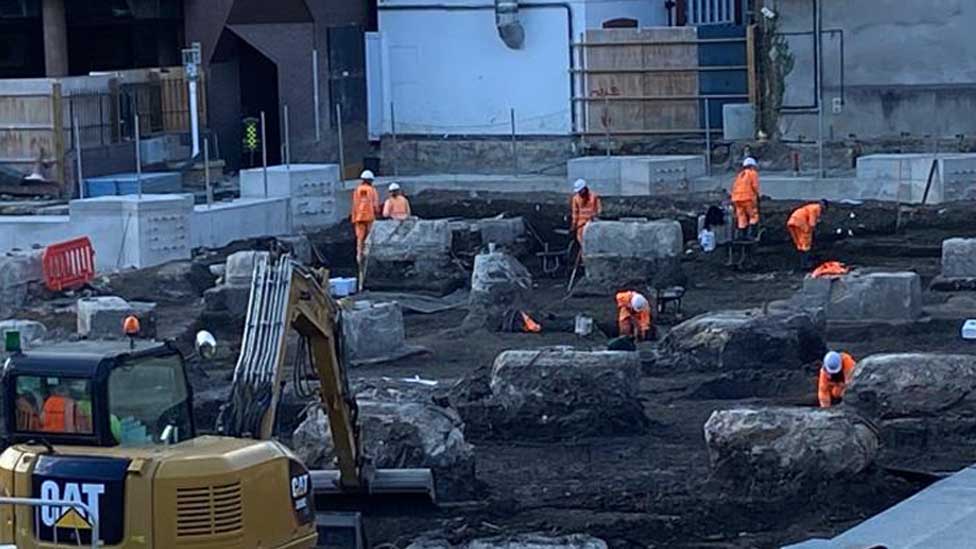 Archaeologists have set up a mini museum of finds spanning 2,000 years for pub customers next to a city centre excavation site.

A 1960s carpark is being redeveloped next to The Maypole, in Cambridge, and part of a Roman road has been found.

Landlord Vincent Castiglione, 56, said his wife came up with the idea of a viewing panel in the hoardings around the site to watch the experts at work.

“The archaeologists then set up a shelf and display their finds,” he said.

“All the regulars are very curious – a lot are academics – and word’s going out, so it’s just another positive way of dealing with all that noise we’ve had to put up with,” he added.

The display – which is behind the acrylic viewing panel – includes Roman Nene Valley pottery dating from the 2nd to 4th Centuries, 11th Century Sandy ware and stoneware stamped Joseph Bourne 1812.

The former Park Street car park is being redeveloped by Cambridge City Council and a developer.

The archaeologists have been on site since 15 August, ahead of the creation of an “aparthotel” serviced apartment block with underground public parking.

Mr Castiglione said; “My wife Anastasia’s done a lot of research on the pub, which has been here for about 200 years, but there are few pictures of what was actually on the car park site before it was built in the 1960s, so we know very little about its history.