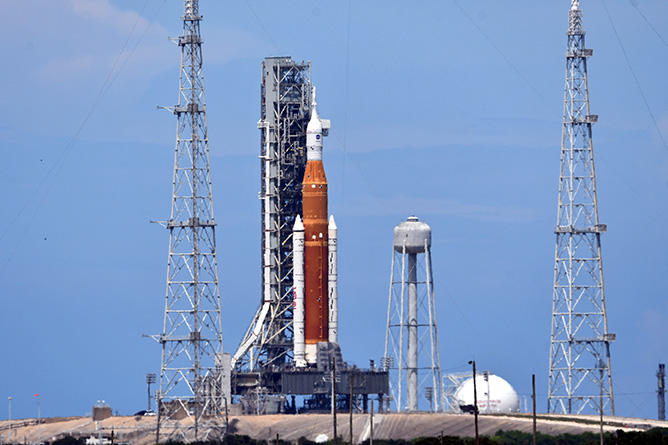 NASA’s Space Launch System moon rocket, bedeviled by fuel leaks, unrelated glitches and finally by an approaching hurricane, headed back out to its launch pad late Thursday for another attempt to get the Artemis program’s unpiloted and oft-delayed maiden flight underway.

NASA’s massive crawler-transporter, carrying the towering SLS rocket and its mobile launch platform, began easing its way out of the iconic Vehicle Assembly Building at 11:17 p.m. EDT. Once in place at the seaside firing stand, engineers will ready the booster for a middle-of-the-night launch attempt at 12:07 a.m. on November 14.

Weather permitting, that is. A “non-tropical low pressure system” in the Caribbean could bring heavy rain and winds gusting up to 40 knots to the Kennedy Space Center next week, slowing launch processing.

But mission managers said predicted worst-case conditions are well within the SLS rocket’s ability to withstand them at the pad and the team has a day of contingency time left in the schedule.

“I think everyone feels really good about the launch,” said Jim Free, director of exploration systems at NASA Headquarters. “If we weren’t confident, we wouldn’t roll out.”

Even so, he acknowledged the problems that have frustrated engineers ever since the $4.1 billion rocket was rolled to the pad for the first time last March for a fueling test and practice countdown known as a “wet-dress rehearsal.”

As it turned out, NASA needed four tanking tests because of a series of propellant leaks and a variety of other issues, two launch attempts and another tanking test to verify repairs and new techniques developed to minimize leakage.

That test went well, but Hurricane Ian then forced NASA to roll the SLS back to the shelter of the Vehicle Assembly Building on Sept. 26. Engineers took advantage of the roll back to replace batteries in the rocket’s self-destruct system and to carry out other more routine maintenance.

Free said there are no outstanding technical issues and the team is looking forward to making another run at launch.

“This is a challenging mission,” he said. “We’ve seen challenges just getting all our systems to work together. And that’s why we do a flight test. It’s about going after the things that can’t be modeled, and we’re learning by taking more risk on this mission before we put crew on there.

“Those challenges, you know, come with this complex of a vehicle, and in where we’re flying and and how we’re getting there.”

The Artemis 1 mission is intended to put the SLS rocket through its paces and to verify NASA’s Orion crew capsule can carry astronauts back to the moon and then return them safely to Earth with a high-speed plunge back into the atmosphere before a Pacific Ocean splashdown.

If the Artemis 1 mission goes well, NASA plans to launch four astronauts atop the next SLS in the 2024 timeframe, testing the Orion spacecraft in Earth orbit before flying it around the moon and back. The program’s first lunar landing — Artemis 3 — is planned for 2025 or 2026.

Preview: Steven Spielberg on making “The Fabelmans”: “It was cathartic for me”