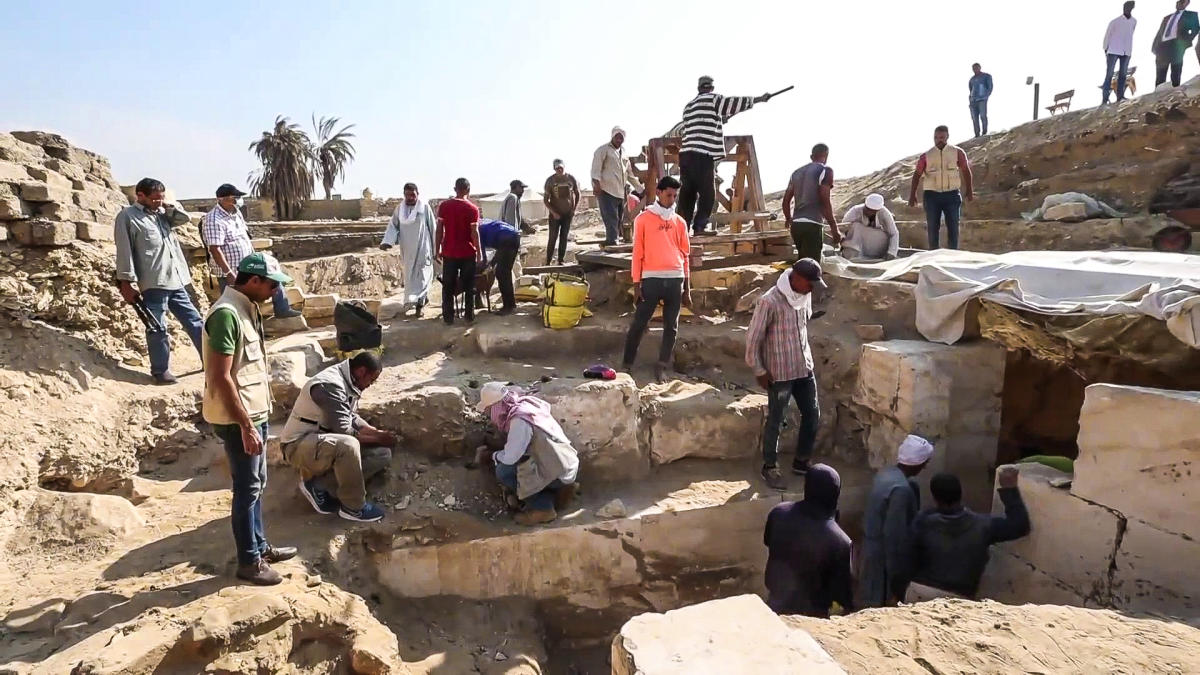 GIZA, Egypt — A century after the discovery of Tutankhamun’s tomb made headlines around the world, in the sweltering desert heat just outside Cairo, a small team is still making new finds in ancient Egypt.

Digging layer by layer at the Saqqara site in Giza, moving earth one bucket at a time, archaeologists have found a giant trove of ancient coffins and mummies, along with ceramic amulets believed to have been used in burial rituals, and thick papyrus documents.

Egyptologist Zahi Hawass, Egypt’s former state minister for antiquities, told NBC News Wednesday that the site contained countless other artifacts relating to another pharaoh, King Teti, and his followers who worshipped him as a god for 1,000 years after his death.

The remains of King Tutankhamun’s closest generals and advisers were also at the site, which sits about 20 miles south of the North African nation’s capital, he said.

“I really believe that this year and next year, this site is going to be the most important site in Egypt,” said Hawass, referring to a network of underground rooms hidden 65 feet beneath the oldest pyramids in Egypt.

“I always say that we found until now only 30% of our monuments are still there, 70% are buried underneath the ground,” he said.

The discovery of so many new coffins in the region could be because “Teti was worshipped as a god in the New Kingdom, and everyone wanted to be buried alongside him,” Hawass said, adding that his team had found close to 300 coffins in the vicinity of his pyramid this year, most of them in good condition.

Believed to have ruled for approximately 12 years between 2300 and 2181 B.C., Teti was the first king of the Sixth Dynasty of ancient Egypt.

Although Teti’s sarcophagus is 4,300 years old, people continued to be buried near him for more than 1,000 years later, because they wanted his protection, Hawass said.

After the mummies are exhumed from the site, archaeologists X-ray them to determine their ages at death, any diseases they might have carried in their lifetime, and what might have killed them. Teams then carry out a process of careful conservation and begin to record and archive newly uncovered antiquities.

Hawass said the coffins and antiquities found at the site would likely be displayed in the Grand Egyptian Museum in Giza, which is scheduled to open next year, although the project has stalled numerous times because of political instability and lack of government funding, according to the museum’s website.

Numerous objects associated with Tutankhamun are also set be displayed there, although the boy king’s famous death mask and sarcophagus are still on display at the Egyptian Museum in Cairo, in the interests of preserving tourism, Hawass said.

Tutankhamun‘s tomb was discovered in 1922 nearly 400 miles south of the site in Giza in the Valley of the Kings in Luxor, by British archaeologist Howard Carter.

Believed to have become pharaoh when he was 8 or 9 years old, in around 1334 B.C., Tutankhamun ruled until his death 10 years later, and is believed to have suffered from numerous illnesses and disabilities, including a flat foot, circulatory problems and malaria.

Undisturbed by grave robbers, the tomb was almost completely intact when Carter discovered it. “Inside, he found that there were four big shrines and he took them out by ropes,” Hawass said.

“And under the shrines, he found the golden coffins, three coffins,” he said, adding that among the 5,000 artifacts found in the burial chambers was a golden dagger to protect Tutankhamun in the afterlife, an ornate throne engraved with the love story of his mother and father, and containers of beer and wine.

“In ancient Egypt, gold was like dust” said Hawass, who could not quantify how much this heritage was worth to modern Egyptians.

“As an archaeologist, if you gave me the whole money of the United States and England, I would say no,” he said. “This heritage belongs to everyone.”