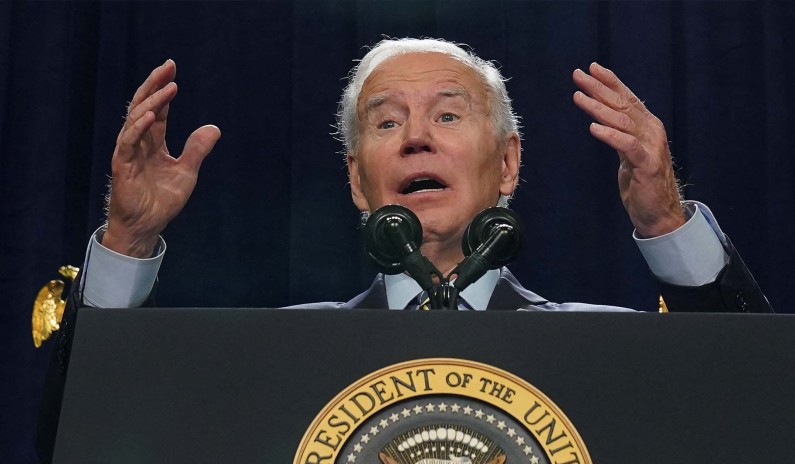 President Biden on Saturday ripped into protesters gathered outside the venue where he was speaking, calling them “idiots” for labeling Democrats “socialists” over their approach to health care policy.

“Social security and Medicare are more than government programs, they’re a promise. They’re a promise. Work hard and contribute and when the time comes, things will be easier for you,” Biden said in remarks at Jones Elementary in Joliet, Ill. “It’s a rock-solid guarantee, an iron-clad commitment. Generations of Americans have counted on it and it works.”

“I love those signs when I came in — socialism. Give me a break, what idiots,” the president added. “No one ever doubts I mean what I say, sometimes of course I say all that I mean.”

Dozens of protesters were gathered outside the school holding signs with phrases such as “Let’s Go Brandon” and “Socialism Sucks,” according to The Hill.

With the midterms just days away, Biden’s closing message has focused heavily on alleged Republican threats to social security and Medicare. Biden’s remarks on Saturday centered on promoting the inaccurately named Inflation Reduction Act, specifically those provisions which lowered drug costs for seniors.

The legislation gives Medicare the power to directly negotiate drug prices with pharmaceutical companies, caps insulin at $35 per month under Medicare Part D, and limits out-of-pocket prescription costs to $2,000 a month under Part D.

Democrats have tried to sell the legislation as part of an effort to reduce inflation but even Senator Bernie Sanders, a self-professed socialist, noted that the legislation was poorly named because it would fail to meaningfully target inflation. He ultimately voted for it.

“According to the CBO and other economic organizations that study this bill, it will, in fact, have a minimal impact on inflation,” Sanders said. “Clearly, the inflation of today is pushing the average person even further behind.”

Biden on Saturday framed Republicans as obstructionists for rejecting a bill that would not achieve what it claimed to do.

“Every single Democrat in Congress voted” for it, he said. “Every single Republican voted against it.” Biden lauded the Democratic congressional delegations and lawmakers like Massachusetts Senator Elizabeth Warren for fighting for the reforms.

The caps on prescription drug prices and insulin, Biden warned, will be “all gone if they succeed,” referencing the impending GOP sweep. “But I’ll veto it,” he said, eliciting laughter from the crowd.

“They’re also coming for your Social Security and Medicare,” Biden said. Rick Scott’s framework would put them “on the chopping block every five years,” at which point they will either vote to keep, cut, or eliminate the programs, he claimed.

“All federal legislation sunsets every five years. If the law is worth keeping, Congress can pass it again. So every five years, we’re going to have to vote. In other words, it goes out of existence if we don’y vote to keep it,” he said.

Senator Ron Johnson is pitching an even more extreme timeline, Biden said. “He thinks Social Security and medicare should be on the chopping block every single year,” he yelled. “You’ve been paying for this your whole life. Now these guys want to take it away. Who the hell do they think they are??” The GOP is also still intent on repealing the Affordable Care Act, he told the audience.

At a speech at Union Station in Washington, D.C. on Wednesday, Biden urged a return to civility and decency in an attempt to lower the political temperature before the midterms. He condemned political violence and intimidation directed at either Republicans or Democrats.

His call for calm came after a mentally ill conspiracy theorist broke into House Speaker Nancy Pelosi’s San Francisco residence and violently attacked her husband with a hammer.

Biden was joined at the rally by Democratic Senators Tammy Duckworth and Dick Durbin of Illinois and Representative Lauren Underwood (D., Ill.).