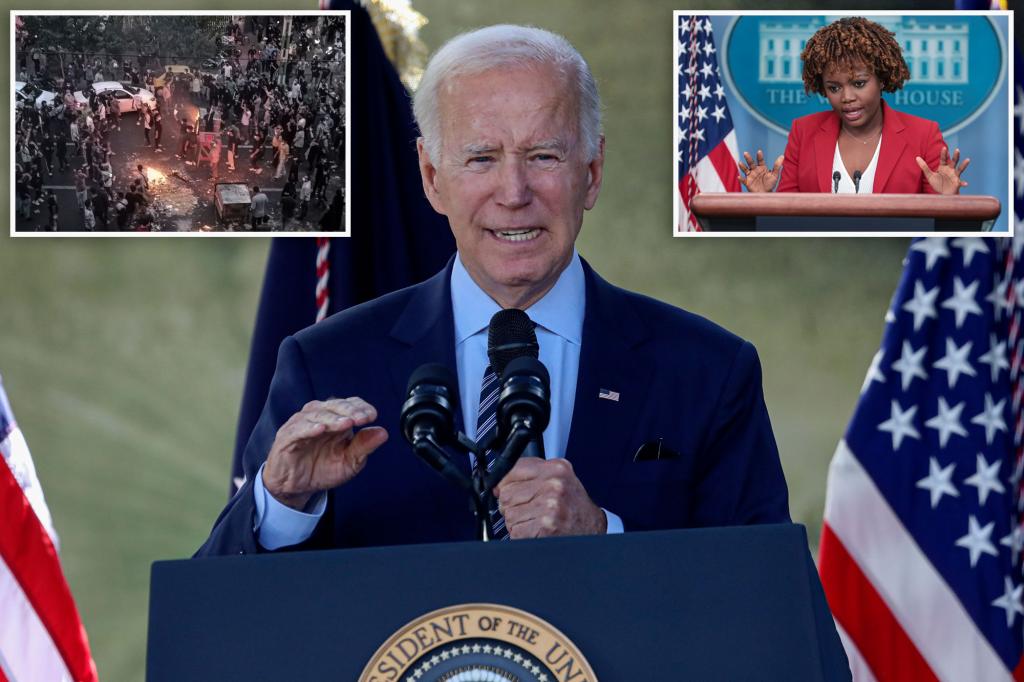 White House press secretary Karine Jean-Pierre on Friday attempted to clarify President Biden’s vow to “free Iran,” saying that he was simply “expressing our solidarity” with the young protesters there.

The president didn’t offer any details on specific actions that his administration would take to “free Iran.”

Jean-Pierre later told reporters aboard Air Force One: “The president was expressing our solidarity with the protesters as he has been doing from the very onset.”

She noted that the administration has leveled sanctions against the Iranian regime and that Biden “spoke very loud and clear” in support of demonstrators during a speech at the United Nations in September.

The White House spokeswoman did not say that the president’s remark indicated any specific change in policy toward Iran but said the regime “must stop its violence and intimidation.”

“Iran’s leadership is facing problems of its own making. We are going to continue to look for ways to hold the regime accountable for the way that they are treating their people,” Jean-Pierre said.

“Our policy is to support the right of peaceful assembly and free speech, that’s what we are doing,” she added.

Protesters in Iran have been demonstrating for the last seven weeks in response to the death of 22-year-old Mahsa Amini while she was in the custody of Iran’s morality police.

“Biden vowing to ‘free Iran’ sends all the wrong messages about the US role in the Iranian protest movement,” Sina Toossi, a senior fellow with the Center for International Policy, wrote on Twitter.

“It plays into the Islamic Republic’s hands by making it seem like the US is admitting to spearheading a regime change project – and not the Iranian people themselves,” Toossi added.

Rep. Darrell Issa (R-CA) argued that after the Biden administration’s Afghanistan blunder, it lacks the credibility for the comment to be taken seriously.

“Now Biden says ‘We’re gonna free Iran.’ But after abandoning Americans in Afghanistan and leaving our partners there to die, his promise to the brave people in the streets of Tehran simply isn’t credible,” Issa wrote in a tweet.