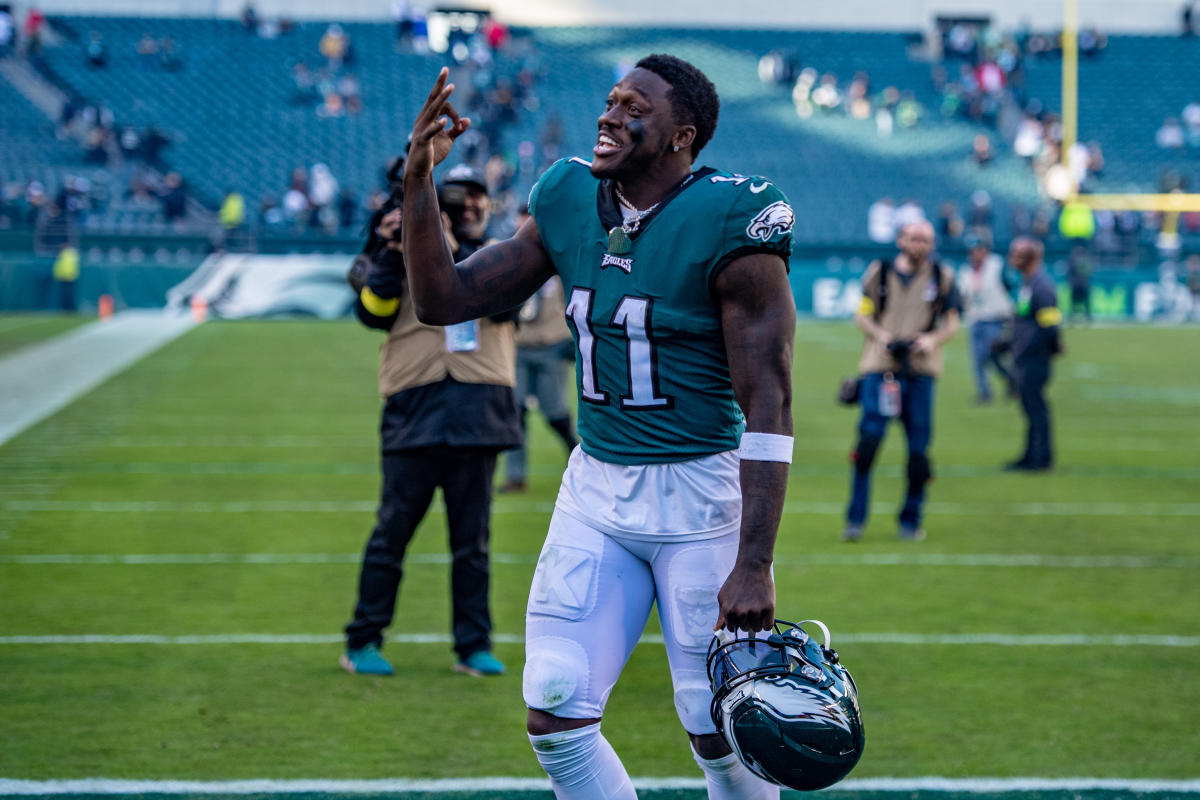 “My two little finger points the other day cost me 5k a piece,” he wrote.

The 25 year old pointed at Steelers cornerback Ahkello Witherspoon and safety Minkah Fitzpatrick after scoring a second-quarter touchdown during the Eagles’ 35-13 win.

The first one, which came with just over nine minutes left in the first quarter, featured Brown snatching a ball that looked like it could have been intercepted.

That was his second touchdown of the game, the first one came with just over nine minutes left in the first quarter with Brown snagging a ball that looked like it could have been intercepted.

It was a massive game for Brown, who finished with six catches for 156 yards and three touchdowns.

According to NBC Sports Philadelphia’s John Clark, Brown is the first Eagles player in 53 years with 3 touchdowns of 25 yards or more in a game.

The performance seems to be the gift that just keeps giving to Brown, who also joked on Twitter that it was the cause of a “random” NFL drug test the next morning.

“I would have a drug test this morning huh,” he wrote, “Rogerrrrr this is not random.”

While the NFL does have somewhat of a track record for their random drug tests landing after stellar performances, the league is also no stranger to doling out fines for celebrations.

This is only Brown’s third career fine. The previous two came in 2020 with the Titans for excessive celebrations, totaling $19,000.

Earlier this season Jamaal Williams had to pay a $13,315.25 fine after the Detroit Lions running back was flagged for unsportsmanlike conduct following a passionate touchdown celebration in Week 3, according to NFL Network’s Tom Pelissero.

Like Brown, Williams scored his second touchdown of the day, but instead thrusted his hips three times, which prompted the flag from the officials.

If that dollar amount sounds large, it’s actually only slightly more than the collectively bargained fine amount for the first offense of unsportsmanlike conduct that Brown likely incurred.

Plus, the NFL says the fines collected do not go to them, but are donated through the NFL Foundation to programs the NFL and NFLPA select.

So, while Brown says he’ll be keeping his “hands, feet, and other objects” to himself while he plays for the 8-0 Eagles, he can rest assured knowing that his celebrations will benefit a greater good.