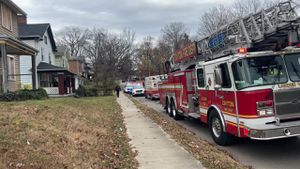 One person was taken to the hospital after crews responded to reports of a teenager who had been shot.

Around 12:10 p.m. crews were called to the 1900 block of Catalpa Drive to reports of a 15-year-old who had been shot in the knee, according to Montgomery County dispatch.

Dispatchers said the teenager was reportedly shot by two suspects. At this time, the suspects are not in custody.

The juvenile was taken to an area hospital, according to dispatch.

We are working to learn what led up to the incident and the condition of the person shot.

We will update this story as we learn more.