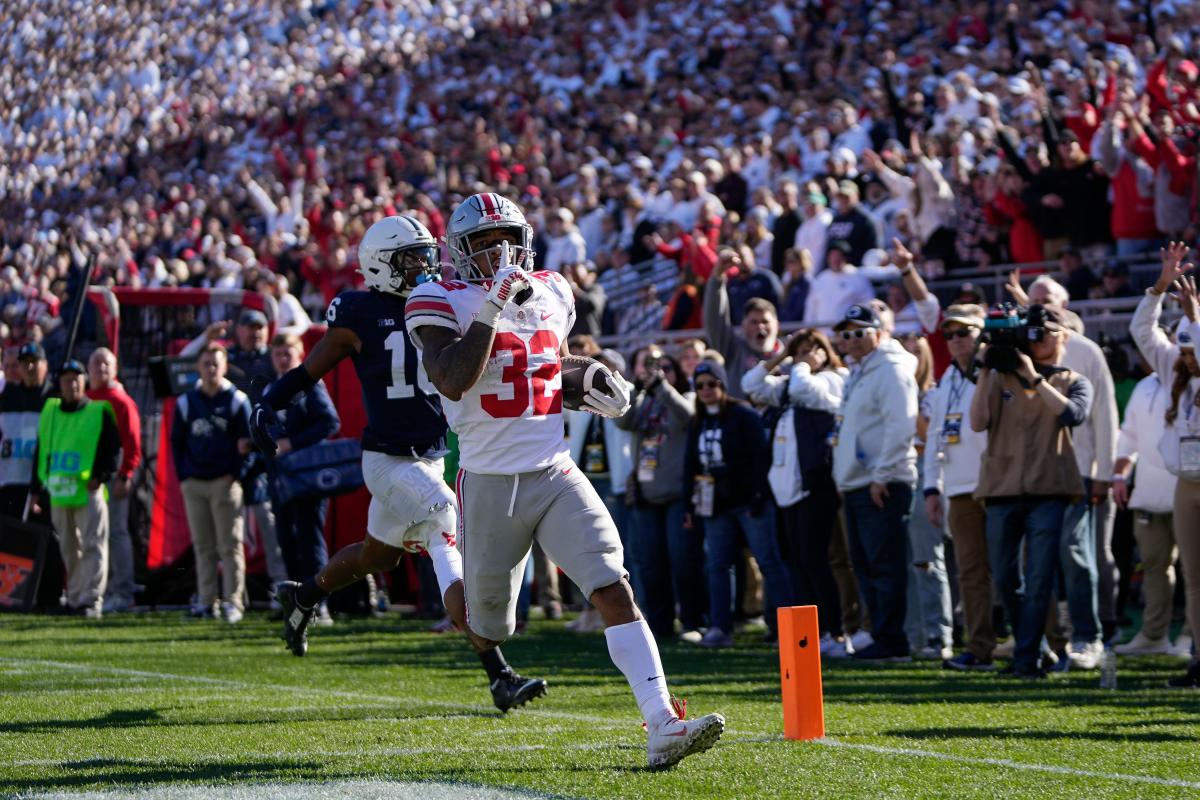 Henderson was one of 12 players who were listed as unavailable on the Buckeyes’ pregame status report.

He was hurt previously this season when he suffered an apparent foot injury in the final non-conference game against Toledo. Two weeks later, he was sidelined against Rutgers and also took a hard hit at Michigan State last month that kept him out for the second half of the win.

Leading the Buckeyes in rushing while in and out of the lineup over the first two months, the sophomore has run for 552 yards and six touchdowns.

In last week’s comeback win at Penn State, Henderson scored the go-ahead touchdown in the fourth quarter when he burst through the defense on a 41-yard run.

Want to keep up with Ohio State? Don’t miss a single Buckeyes story. Get a great deal by subscribing to the Dispatch today at www.dispatch.com/subscribenow/.

To manage his absence this afternoon, the Buckeyes will have Miyan Williams available.

Williams was banged up at the end of the first quarter last week when he landed on a first-down marker along the sideline at Beaver Stadium.

He never returned following the collision and watched the remaining quarters with his right hand in a cast.

The redshirt sophomore from Cincinnati has been a complement back to Henderson as a hard-nosed runner. No Big Ten running back with as many carries as Williams averages more yards after contact, according to Pro Football Focus.

He has rushed for 525 yards and 10 touchdowns, with five of those coming against the Scarlet Knights in a performance that tied the school’s single-game record.

During his weekly radio show on 97.1 The Fan on Thursday, coach Ryan Day had indicated he expected Williams to return against the Wildcats and previously mentioned the injury was not serious.

Williams was seen leaving practice on Wednesday night in full pads with a helmet.

Two other scholarship running backs remain on the depth chart behind him between Dallan Hayden and Chip Trayanum, who switched positions from linebacker a few weeks ago.

Trayanum had been a running back at Arizona State the past two seasons before transferring to Ohio State this past winter.

Star receiver Jaxon Smith-Njigba, who made a brief return against Iowa following the Buckeyes’ idle week, will remain out with an injured hamstring.

It will be the sixth out of the last eight games that Smith-Njigba, who was their leading receiver last fall and a preseason All-American, has been unavailable.

His father told The Dispatch earlier this week that it is unlikely he is healthy enough to come back before the final game of the regular season against archrival Michigan on Thanksgiving weekend.

Maada Smith-Njigba referred to a return against the Wolverines as the best-case scenario.

Who else is out for the Buckeyes against Northwestern?

Brown began the season as one of the Buckeyes’ starting cornerbacks, but has missed most of Big Ten play with an undisclosed injury.

The only conference game with Brown available was at Michigan State.

JK Johnson has started in place of Brown at the cornerback spot opposite Denzel Burke during the stretch, but fellow redshirt freshman Jordan Hancock has also been available in recent weeks and is expected to see his workload increase as he recovers from a hamstring injury that caused him to miss the first six games.

A return for Robinson, a veteran on special teams who suffered a knee injury two weeks ago, appears unlikely.

Day said Thursday that he anticipates Mason Arnold and Max Lomonico to be the long snappers for the rest of the season.

Joey Kaufman covers Ohio State football for The Columbus Dispatch. Contact him at jkaufman@dispatch.com or on Twitter @joeyrkaufman

Get more Ohio State football news by listening to our podcasts