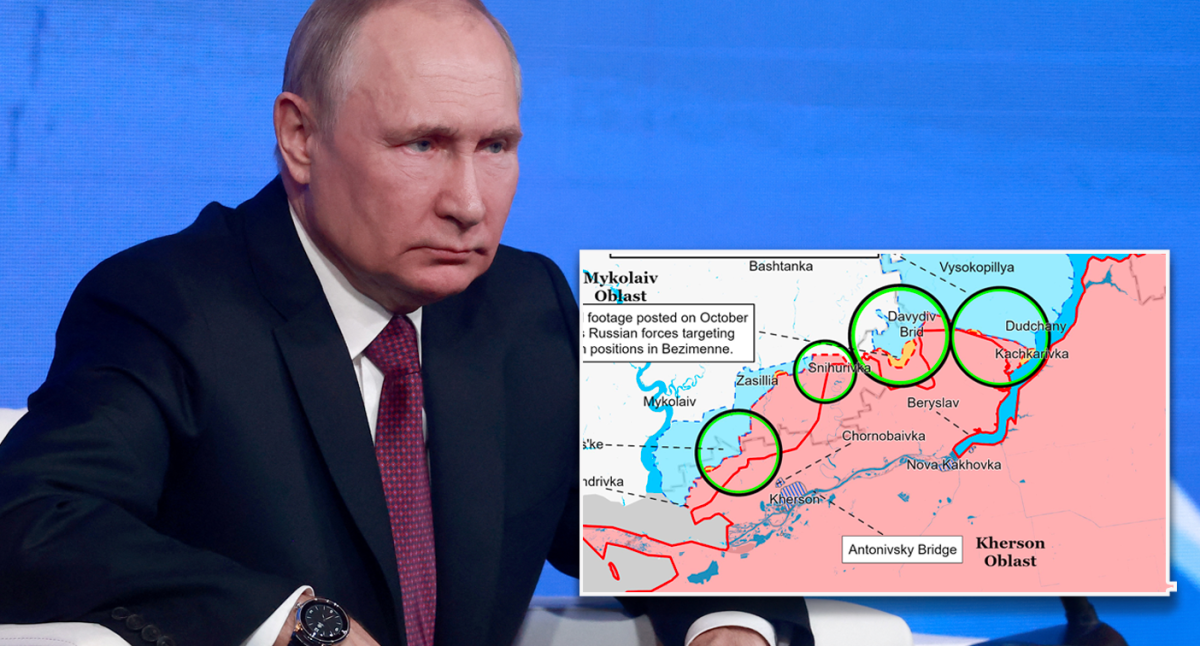 As the Ukraine war drags on, Russian president Vladimir Putin has publicly endorsed the evacuation of parts of the country’s crucial Kherson region in the southeast. The move comes ahead of what’s been described as “the biggest battle” in the Kremlin’s ongoing invasion.

As Ukrainian troops surge in a bid to reclaim land taken by Russian forces in the east and south of Ukraine, it is the latest sign of Russia’s retreat in hotly contested parts of the country. However given it’s importance – with Kherson providing Russia a land bridge to Crimea (which it annexed in 2014) – Putin is expected to take drastic measures to return fire.

“Those who live in Kherson should be removed from the zone of the most dangerous actions because the civilian population should not suffer,” he told pro-Kremlin activists as he marked Russia’s Day of National Unity on Friday (local time).

Russia has already been ferrying people out of an area it controls in Kherson on the west bank of the Dinpro River and this week announced that the evacuation zone would also include a 15km buffer area on the east bank. Russia says it has been taking residents to safety from the path of a Ukrainian advance.

While it is hard to verify information coming from the country’s battlegrounds, videos posted to social media purport to show Ukrainians welcoming armed forces in liberated towns and villages. Ukrainian investigators have also been going door-to-door in the Kherson region, hearing stories of rape by Russian soldiers in formerly occupied towns, according to CNN reporters on the ground.

Putin’s public comments came amid signs Russia could be preparing to abandon its military foothold on the west bank of the Dnipro River, including Kherson’s regional capital – potentially one of the biggest Russian retreats of the war.

Speaking to Reuters while digging trenches west of Kherson, a Ukrainian commander who gave his name as Oleh said neither he nor his men think the Russians will go quickly or quietly.

His comments raise the spectre of a bloody slog in the coming weeks for control of a key city on the west bank of the Dnipro River which acts as a gateway to the peninsula of Crimea.

“They will keep fighting. They will defend their positions as long as they have the ability to do so,” the 26-year-old said. “It will be a hard fight.”

Kirill Stremousov, deputy head of the Russian-installed administration in Kherson region, said on Thursday (local time) that he hoped Russian forces would put up a fight. “If we leave Kherson, it will be a huge blow,” he added, in comments broadcast by Russia’s RT television.

The contest for the only provincial capital seized by Moscow in the full-scale invasion launched on February 24 may be one of the most consequential of the war so far. For Russian President Vladimir Putin, it would be another setback following a series of significant battlefield losses since mid-August.

Crimea is home to Russia’s Black Sea fleet and Kyiv has made the peninsula’s recovery its sworn goal.

Were Kherson to fall in the counter-offensive, it would also be a political humiliation for Putin, as Kherson is one of four partially occupied regions of Ukraine that he announced would be part of Russia “forever” with great fanfare on September 30.

The Washington Post described the impending fight as arguably “the biggest battle” of the war so far and “perhaps the single best test of whether Moscow ends up winning any significant territory from its invasion or is forced to retreat empty-handed.”