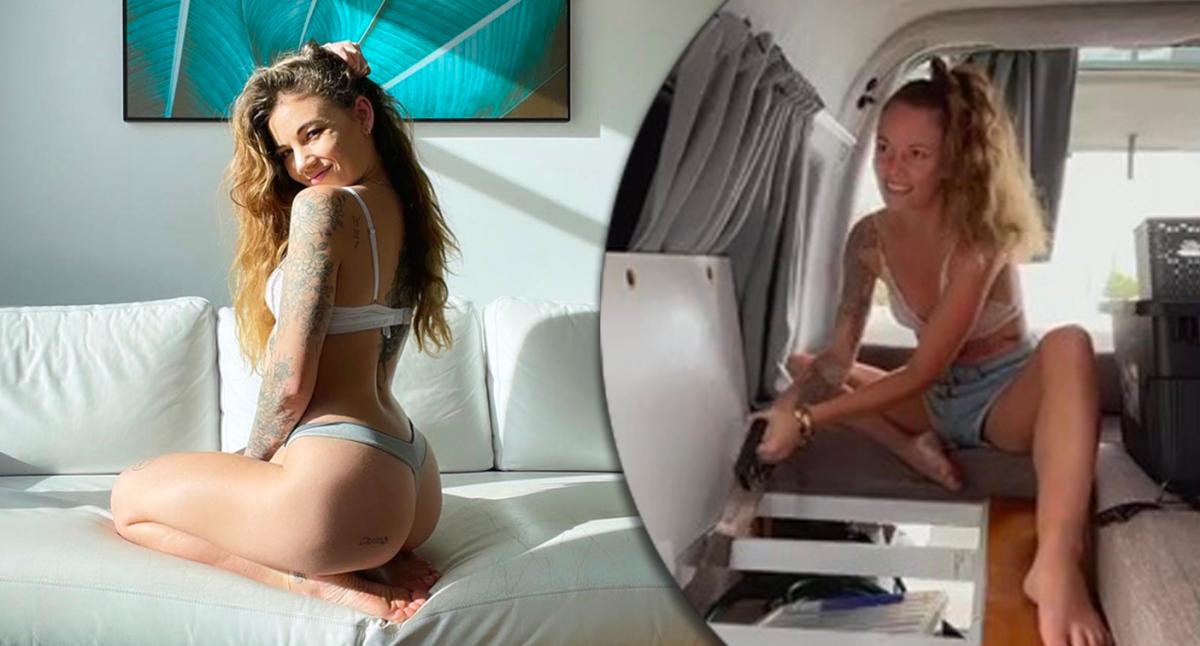 Fed up with an expensive and competitive rental market, New Zealand woman, who goes by the name Violett Rose has embraced a more nomadic lifestyle.

The 27-year-old has been living on the road for almost a year, claiming she supports herself through sharing racy content on OnlyFans – and saves almost $1000 a month by no longer paying rent.

Originally launching her OnlyFans in January 2021 “as a joke”, the former teaching assistant began relying on it after ending a longterm relationship and quitting her steady job.

In March, she ditched her job to become a full-time creator and a few months later in September, invested in a self-contained Toyota Regius Ace van.

“The idea all came about as a joke around new years, I never thought anything would happen from it,” she said.

“I went from having what felt like a bunch of responsibilities to only needing to worry about myself within a week.

The self-made model splashed out her savings on the $23,000 vehicle, before setting off to live in the van full-time. The previous owners had already done work on it, installing a mini kitchen, fridge, sink and pantry.

Ms Rose added minor details including an alarm, extra storage and window tints and then set off on her adventure.

So far, she is yet to leave New Zealand, having explored the northern parts of the island, which often serve as the background to her saucy shots.

The model has taken in sunsets and sunrises at Milford Sound, gone swimming in waterfalls and is headed to see the Pancake Rocks, Roy’s Peak and Hooker Valley.

“The van is great to travel around in and I’ve not had any issues with finding places to parks,” she explained.

“There were a couple of minor issues with the van that weren’t disclosed at the time of purchase but I was lucky enough to have friends that work with vehicles to help me get most of those issues fixed for free.”

She says her friends and family have also been rather supportive of her choice to become a nomad.

“Seeing people online living and travelling from their vans I knew that was the way I wanted to go see the country.

“It meant I could travel without worrying about needing to go back to a home base as I was taking everything I owned with me.

“I’m a huge advocate for mental health and I absolutely love that I now get to hear from people who tell me how my social media and self have helped them feel happier and less alone.

Like Australia, New Zealand’s rental market has tightened dramatically in recent months, with the shortage of available properties pushing up prices.

“The great thing about van life is that it gives you so much more flexibility in terms of bills and life expenses,” Ms Rose said.

“You don’t have a set weekly amount to pay as your ‘rent’ ends up being your petrol so you only pay as much as you need to travel that week.

“When I was renting a flat, my rent would be $230 a week before expenses, which would have felt a lot better if the money wasn’t going towards a damp room in an old house that had been split into two separate flats, with two people in the flat below me and two flatmates sharing the top story with me.

“In terms of how much I spend now per week, it can sometimes be $0 on petrol if I haven’t changed locations, my phone bill is about $80 a month.”

Although she has seen some success on the site social media platform, she has a few words of warning for anyone looking to follow in her footsteps.

“Honestly, it [the income] changes each month and it can vary quite significantly, so don’t let the money side of things be the influencing or motivating factor.

“The experience is different for everyone and I know a lot of girls that work really hard and don’t earn nearly as much.”