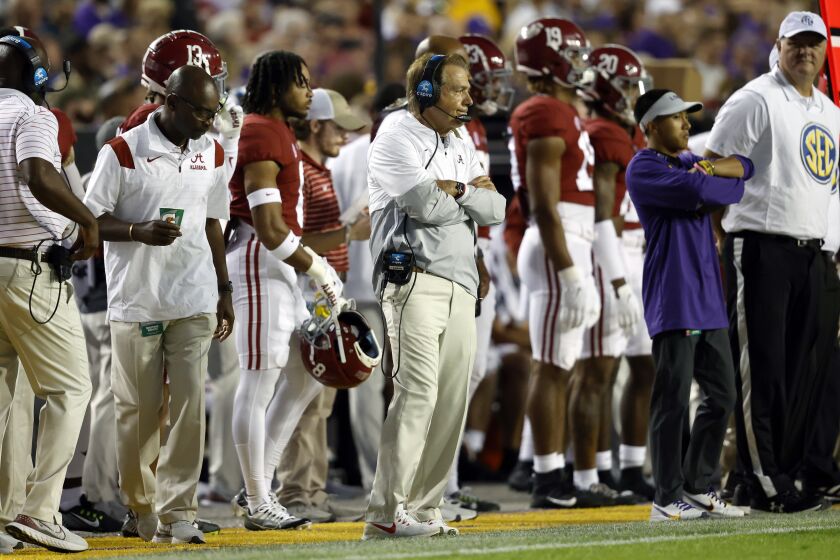 The winner of the USC-UCLA football game will control its own destiny and have a viable path to the College Football Playoff semifinals.

Let that sink in.

The crosstown rivalry will mean much more than bragging rights or bringing home the Victory Bell.

I’ve been ringing this bell for weeks now, trying to jar Trojans and Bruins fans out of their comfort zones. The fan bases couldn’t be more different in so many ways, but lately, with both teams showing surprising might, it’s been shocking to see how much they share. They don’t want to get hurt, so they’d rather protect themselves from caring about competing for a national championship in the country’s second-most popular sport.

For USC folks, as excited as they are by Lincoln Riley’s stirring first season, the overwhelming vibe is: “Yes, this is fun, but we’re not playoff-level good yet, so why go take our embarrassing beatdown against Georgia in a playoff semifinal when we could possibly win a meaningless New Year’s Six bowl game? Caleb Williams will be back, so next year is our year.”

For the UCLA faithful, as encouraged as they are by Chip Kelly’s culture suddenly clicking into place, the feeling is: “There’s no way we truly deserve these legitimate football hopes. Basketball season has begun, and Pauley Pavilion is now selling beer and wine, did you hear?”

If Saturday’s results across the country won’t wake up L.A. college football fans and get them to lock in their tickets for Nov. 19’s showdown at the Rose Bowl, nothing will.

Within an hour Saturday night, Alabama and Clemson were basically eliminated from playoff contention. That’s wild — and exactly what USC and UCLA fans needed (at least, among those who rightfully were allowing themselves to dream big).

The picture for the four-team playoff whose championship game will be played at SoFi Stadium Monday, Jan. 9, just became much clearer.

Georgia is in. With convincing wins over Oregon and Tennessee, the Bulldogs have earned a shot to defend their title. They aren’t going to lose twice from here.

The winner of Ohio State-Michigan in Columbus Nov. 26 is in. The team that wins The Game and the Big Ten East title is extremely unlikely to lose to the Big Ten West division’s champion the next week.

That list is being very generous. For now, we can start by eliminating any team with two losses. LSU and Alabama, thank you for an amazing football game Saturday night, but you’re out. Clemson was overrated to begin with and won’t make the cut unless it’s full-on Armageddon from here. Ole Miss’ path is extremely slim (the Rebels need to win out and have LSU lose, then beat Georgia in the SEC title game — not happening).

If TCU wins out, it should be in. I don’t expect that will happen, because the Horned Frogs still play at Baylor and at Texas and will face another quality team in the Big 12 championship game. Based on the original No. 7 ranking, TCU can’t take a loss and make the playoff semifinals. (To be clear, USC and UCLA fans should be rooting very hard against TCU).

If TCU did win out, the fourth spot would come down to the Pac-12 champion (assuming it’s a one-loss Oregon, USC or UCLA) or one-loss Tennessee (assuming the Vols don’t get upset later this month).

A 12-1 USC or UCLA could feel very confident about its chances to be invited to the CFP over 11-1 Tennessee for the following reasons:

Notre Dame’s win over Clemson helped USC twofold. The Tigers are out of the way, and the Fighting Irish would now be a top-25 victory for the Trojans. It sets up USC’s finishing stretch as top-10 UCLA, top-25 Notre Dame and — if the Trojans beat the Bruins and Oregon wins out — top-10 Oregon. To me, USC is a lock to the playoff if it somehow goes 12-1.

If you don’t enjoy thinking in hypotheticals, the flawed four-team playoff format is not for you.

Please do not be confused: I am not saying that USC and UCLA are great, transcendent teams that deserve an exalted place in their school annals. I’m saying that they now have a crystal-clear path to the playoff semifinals this year — a year in which the championship happens to be played at SoFi Stadium.