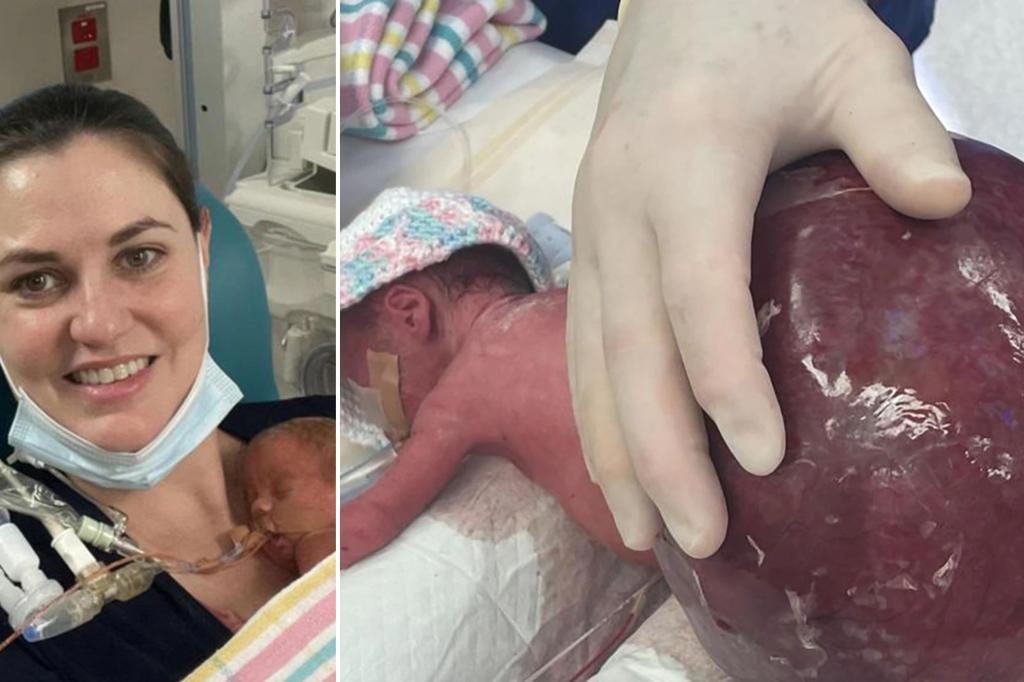 A baby born three months premature with a tumor weighing double her size has been dubbed a “miracle” by doctors.

Saylor Thomson was born at the Mater Mothers’ Hospital in August, weighing 1,025 grams, with a two kilogram tumor growing from her tailbone.

The baby’s parents were told at their 20-week scan that their daughter had a 25-40 percent chance of survival.

Just minutes after she was born, a team of 25 began a six-hour operation to remove the sacrococcygeal teratoma from her tailbone – a condition that affects one in every 40,000 live births.

Two months on, Saylor the “miracle baby” has made a “fantastic recovery” and is growing stronger by the day.

Professor Saliesh Kumar from the Mater maternal fetal medicine unit, who helped deliver Saylor, said it was the largest tumor ever removed from a baby of her size at Mater Mothers’.

“We don’t know why the tumor grows, but it arises from embryonic germ cells and is four times more likely to occur in female infants,” he said.

“Saylor’s tumor was extremely large and very complex. The tumor extended into her pelvis and abdomen.

“Many of these babies do not survive the pregnancy … These tumors function like a large vascular shunt causing a lot of blood to return to the heart. In some babies … heart failure occurs.”

Mother Rachel said their daughter was a “strong-willed little fighter.” She was finally able to hold her daughter ten days after giving birth.

“When the social worker and surgeons first gathered to tell us she had little chance of making it due to prematurity and the tumor, I cried hysterically,” Thomson said.

“But being able to hold Saylor in my arms and know she has come through the other side is something special.”

Mater neonatologist Dr Richard Mausling said the expertise and skill of the Mater team was the reason the baby was alive.

He said Saylor had gone from “strength to strength” and had gained weight since her birth, and is now almost three kilograms.