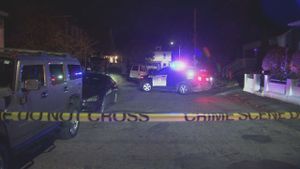 According to a spokesperson from Brockton police, officers responded to the James Street at approximately 12:30 a.m. after receiving a gunfire alert through the city’s electronic gun detection system.

Detectives from Brockton and Massachusetts State Police are investigating the incident.

The victim was not identified.

Anyone with further information is asked to call Brockton Police at 508-941-0234.