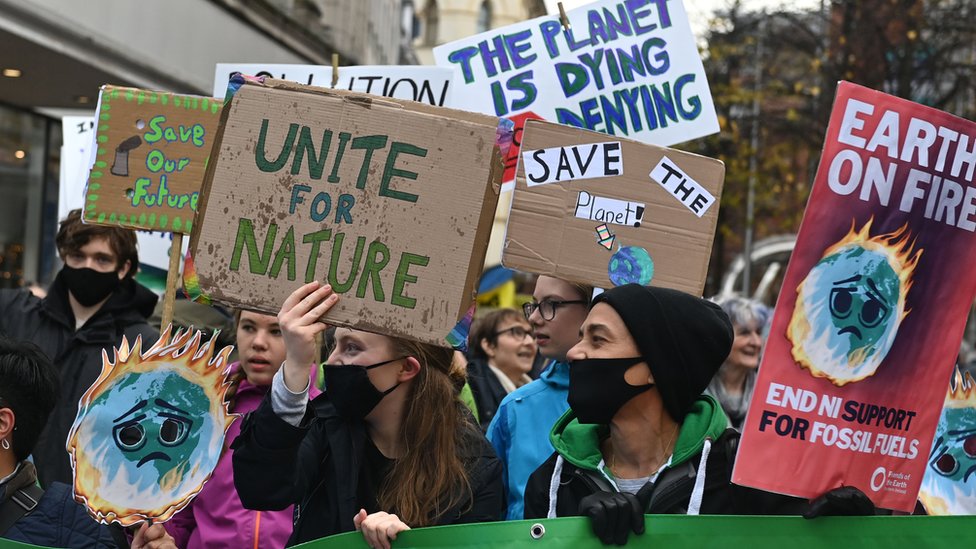 When COP26 was held a year ago in Glasgow, Northern Ireland was the only part of host nation the UK that did not have climate change legislation in place.

Now, as world leaders gather in Sharm El-Sheikh for COP27, what has changed for Northern Ireland, and where is it on its journey to net zero?

The big change, of course, is that climate legislation is now in place in Northern Ireland.

It set a goal of reaching net zero by 2050, creating legal obligations to reduce emissions.

But the former Agriculture Minister Edwin Poots secured an amendment to his own bill that limited the required reduction in methane to no more than 46%.

Methane is a potent greenhouse gas that is mostly produced through agricultural activities.

Critics say that puts additional pressure on other sectors to make up the difference.

Northern Ireland’s first Climate Action Plan coming from the bill is due to be published at the end of December 2023.

It will contain targets for reductions in each of the highest emitting sectors.

The latest Greenhouse Gas Inventory from the Department of Agriculture, Environment and Rural Affairs shows agriculture to be the largest emitting sector in Northern Ireland, contributing 27% of emissions and showing an increase over the 30-year period covered by the statistical bulletin.

Farmers say improving the efficiency of producing food is key to reducing their emissions.

And while they welcomed the limit on the required reduction in methane, the president of the Ulster Farmers’ Union says he is under no illusions about the targets agriculture will be asked to meet.

“They will be challenging for agriculture,” David Brown said.

“That’s why our farmers are looking at obviously carbon audits and so forth, because the retailers are saying we need to be able to provide evidence that we’re moving in a direction that is reducing that carbon footprint.

“There needs to be a focus on maintaining food production as well, as part of that moving forward and mitigating against the worst effects of climate change.”

Transport is the second-highest emitter of greenhouse gases in Northern Ireland, according to the Greenhouse Gas Inventory.

At COP26 in Glasgow, the public transport operator Translink announced it was buying more zero emission vehicles as part of its drive to make its fleet net zero emissions by 2040.

A new transport hub is being built in Belfast which the operator hopes will encourage more people to swap their cars for the bus or train.

“What we’re doing at Translink is continuing what we announced at COP26,” said chief executive, Chris Conway.

“So I think we’ve made great strides, but still a lot to do.

“We are working on the feasibility for electrification of our railway. But also modal shift – how do we get more people using public transport?

“Obviously things like the cost-of-living crisis, Covid, the Ukraine War – all these things are dominating the news at the minute, but really, this [climate crisis] still is the largest crisis we face in the long-term, and we’re very focussed on making sure we address sustainable transport.”

In private transport, electric vehicles are still a tiny proportion of the market – 0.8%, according to the Society of Motor Manufacturers and Traders.

Nine of the 11 councils in Northern Ireland formed a consortium and successfully secured funding from the Office of Zero Emission Vehicles for installing charging points in residential areas where private off-street charging is not available.

But although emissions from making energy have almost halved in the past three decades, the sector still contributes 14% of Northern Ireland’s greenhouse gases.

And world events have focussed attention on the need to be self-sufficient in power generation.

That worries the chief executive of Action Renewables, a charity which promotes renewable energy projects.

“When they’re resolved, we would worry that that emphasis that we’re got at the minute might back off a little bit.

“So we need to keep climate change front and centre of why we’re doing this.”

It is one of the four main strategies underpinning the Green Growth Strategy, which makes the environment and sustainability a basis for economic growth.

It is also intended to be adopted as the first “Environmental Improvement Plan”, hopefully by July 2023.

An energy strategy was also launched by the Department for the Economy – “Pathway to Net Zero”.

It set out the ambition to decarbonise energy in Northern Ireland and an annual action plan was also published.

And if you think that sounds like a lot of strategies, you are not alone.

“We have a lot of policies and papers that have the word ‘green’ attached to the end of them,” said Daithi McKay, chairman of the Climate Coalition.

“They mean nothing unless they’re implemented and we see real emissions reductions.

“So we can have all the policies we want, but unless we have those emissions going down radically, then they mean nothing.”