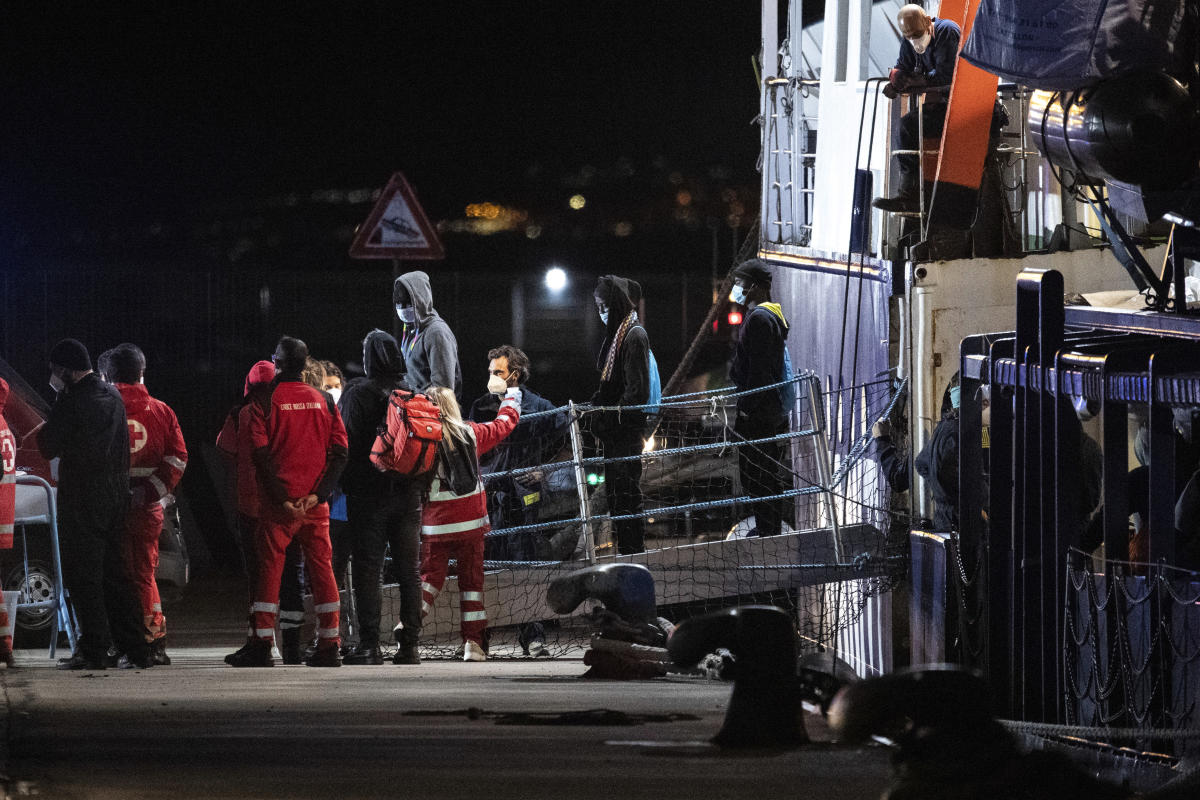 CATANIA, Sicily (AP) — Italian authorities prevented 35 migrants they did not deem vulnerable from getting off a boat in Sicily on Sunday as Italy’s far-right-led government takes a hard line against privately operated maritime rescue ships in Italian waters.

The impact of a directive ushered in by Interior Minister Matteo Piantedosi became clearer overnight. The Humanity 1, carrying 179 rescued passengers, was given access to the Sicilian port, but three other rescue boats run by non-governmental organizations and carrying 900 more people remained at sea.

The NGOs reported people sleeping on floors and decks, the spread of fever-inducing infections and scabies, and food and medical supplies nearing depletion. Some migrants have been on the ships for more than two weeks.

Officials at the German-run charity SOS Humanity, which operates the Humanity 1, challenged Italy’s decision to distinguish passengers considered “vulnerable” or not. All the ship’s passengers were rescued at sea, and that alone qualified them for a safe port under international law, the organization said.

“As we feared, not everyone was allowed to disembark,’’ SOS Humanity spokesperson Wasil Schauseil said Sunday.

“Our doctor was asked to make a selection of the people who are in a bad medical condition, and the doctor replied everyone is in a vulnerable situation, so she would not make the selection,’’ Schauseil said.

Over 100 of the 179 people on Humanity 1 were unaccompanied minors, according to the charity.

Two Italian doctors eventually boarded the ship after midnight and conducted exams through the night to determine which people on board had medical conditions that made them vulnerable.

“The doctors declared 36 people not in an emergency. After receiving the news, one person collapsed and lost consciousness and had to be taken by an ambulance,” Schauseil said. “That is why 35 people are on board.

“You can imagine the condition of the people. It is very devastating,” he said.

The Humanity 1 has not yet received orders to leave the port, as specified in the directive signed by three Italian ministers Friday night. It specified the ship could remain in Italian waters just long enough to determine which passengers were vulnerable, defined as minors and people with medical emergencies.

“Everyone has a right to disembark, and we expect everyone can disembark,’’ Schauseil said. “We do not think this is valid under international law.”

Three other ships carrying rescued migrants remained at sea, two in Italian waters and one in international waters, after the crews made repeated requests for safe ports.

The Norway-flagged Geo Barents, carrying 572 migrants, and the German-run Rise Above, carrying 93, entered Italian waters east of Sicily over the weekend to seek protection from storm-swollen seas.

The Ocean Viking, operated by the European charity SOS Mediteranee, with 234 migrants on board, remained in international waters, south of the Strait of Messina.

The confrontational stance taken by Premier Giorgia Meloni’s government is reminiscent of the standoffs orchestrated by Matteo Salvini, now Meloni’s infrastructure minister in charge of ports, during his brief 2018-2019 stint as interior minister.

Italy’s new government is insisting the countries whose flags the charity-run ships fly must take in the migrants. Late Friday, Piantedosi described such vessels as “islands” under the jurisdiction of the flag countries.

In a Facebook video, Salvini repeated his allegations that the presence of the humanitarian boats encourages smugglers.

Nongovernmental organizations reject the government’s interpretation, saying they are obligated by the law of the sea to rescue people in distress and that coastal nations are obligated to provide a safe port as soon as feasible.

While the humanitarian-run boats are being denied a safe port, thousands of migrants have reached Italian shores over the last week, either on their own in fishing boats or after being rescued at sea by Italian authorities. They account for 85% of all arrivals, according to the government.