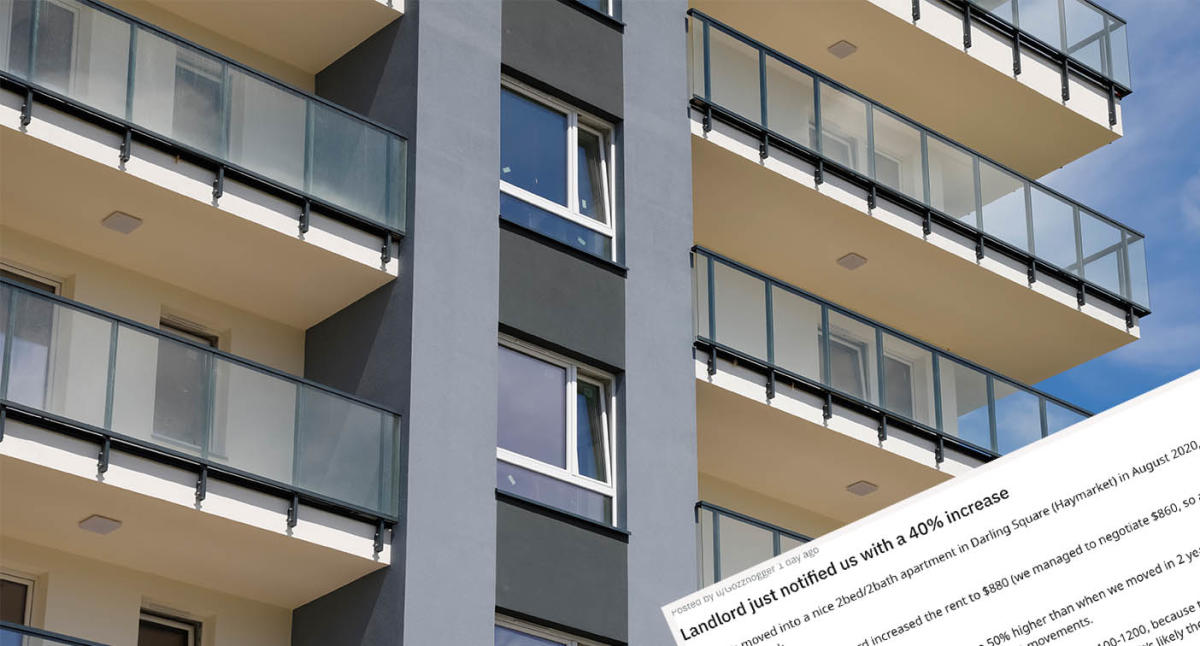 A Sydney couple who just had a baby might have to move homes after their landlord requested a shocking 40 percent increase to their rent.

The husband took to social media on Tuesday to ask for advice, not knowing what the family of three should do.

The man called the market “completely insane at the moment with low vacancies,” noting that apartments in the area are similarly being advertised for for $1100-1200.

“Do we really have any other option than moving? Seems like laws here are so unfairly skewed towards landlords if a 40% YoY (Year-Over-year) increase would be deemed fair,” he continued on Reddit.

The landlord’s ask has come at the most inconvenient time for the family of three.

“I work for the public sector, so my pay only went up 2.5% (wouldn’t want to fuel inflation now would we!), and my wife and I just had a baby, and she won’t be working for the next year or so,” the man said.

Many expressed shock at how bad the housing market has been in Sydney and Australia in general.

“That is wild. I pay $710 on my mortgage a fortnight in NZ,” one person said on Reddit. Everywhere is insane at the moment. I feel sorry for anyone just leaving home for the first time,” another said.

“The Eastern Suburbs is insane at the moment. A friend of mine has been looking since the start of September,” a third person said. “She’s looked at over 50 properties, where the queue to view was down the street.”

Others offered the man advice, suggesting areas to move to.

“Honestly, at about 1/2 that price point, find a 2 bed 1-2 bath place in Randwick/Coogee/Clovelly,” one person said. “Your wife and child get to enjoy Centennial Park and the Eastern beaches while she’s on mat leave, and you have a one bus commute to work.”

“I’ve had this same thought, in a 1 bed flat in an older building near Thai Town (Haymarket),” someone else said to the poster.

“Got a great deal during covid, but if the next rent increase is insane, we’ll recognise that we had a good run in the city and need to move back out again.”

Rent increases must be deemed reasonable

Though another person reminded the man “there are legal protections for tenants against rent increases”.

“Landlords can increase at the end of a lease but they can’t just hike it to whatever they want, it has to be considered reasonable which on the face of it, 40% most definitely is not,” they said.

According to Tenants’ Union NSW, if you think a rent increase is excessive, you should first try negotiate with the landlord to lower or withdraw the increase, or apply to the NSW Civil and Administrative Tribunal (NCAT) for an order within 30 days of the rent-increase notice.

Almost a million renters in NSW will be able to transfer their bonds from one property to the next and can’t be kicked out of their homes without reasonable grounds given, the NSW Labor opposition has pledged.

The promise ahead of the 2023 election comes amid skyrocketing rents in Sydney and rising accommodation costs in regional areas, with NSW’s median rent increasing from $386 to $420 a week between 2016 and 2021.

Under Labor’s portable bonds plan, the NSW Rental Board will allow bonds to be transferred directly to another property so tenants are not immediately out of pocket when they move.

“Anyone who rents in Sydney knows just how anxious and challenging a process it can be to find suitable accommodation, never mind the significant costs associated with moving,” Labor leader Chris Minns said on Sunday.

Relocation or eviction costs the average renter about $4000, according to tenants union data.

“This is a sensible cost of living measure to help ease the pressure on the over 30 per cent of people in NSW currently renting.”

“These changes will create a fairer rental regime in this state by providing greater certainty as well as flexibility for both renters and owners.”

As part of creating a fairer rental market, Labor is also pushing for tightening the rules for landlords to end a lease for tenants, including minimum notice to vacate a property.

Currently, renters can be evicted after a six or 12-month lease without the landlord having to give a reason.