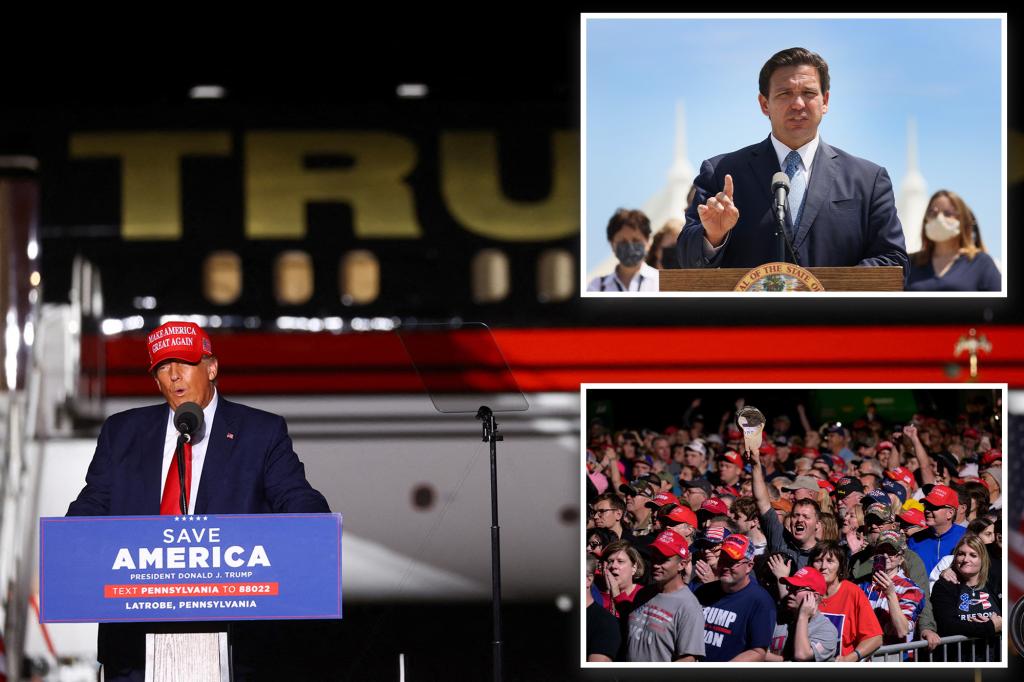 Former President Donald Trump mocked Florida Gov. Ron DeSantis as “Ron DeSanctimonious” during a Pennsylvania rally for Republican gubernatorial and Senate candidates — taking a shot at the person who will most likely be his toughest political foe in 2024.

With Trump Force One as a backdrop in Latrobe, Pa., on Saturday evening, Trump urged Republican voters to oust Democrats across the board and began reading off his own poll numbers from a jumbo screen nearby.

“We’re winning big, big, big in the Republican Party for the nomination like nobody’s ever seen before,” Trump ​said.

“There it is, Trump at 71 [percent]. Ron DeSanctimonious at 10 percent. Mike Pence at 7 — oh, Mike Pence doing better than I thought,” ​Trump continued at the rally for gubernatorial candidate Doug Mastriano and Senate hopeful Dr. Mehmet Oz. ​

The 45th president is widely expected to announce his candidacy for 2024 as early as Thursday, depending on whether the results of Tuesday’s midterm elections have been decided. ​

He dropped another hint Saturday that he was ready to mount another campaign.

DeSantis, who is leading in the Florida polls and likely to coast to a reelection win over Democrat Charlie Crist, has not said whether he would run for president in 2024.

In a debate with Crist last month, DeSantis refused to say whether he would serve a full four-year term if voters sent him back to the governor’s mansion in Florida.

“I know that Charlie is interested in talking about 2024 and Joe Biden, but I just want to make things very, very clear: The only worn-out old donkey I’m looking to put out to pasture is Charlie Crist,” DeSantis​ said​.

A​nd while Trump will hold a rally in Miami on Sunday to boost GOP Sen. Marco Rubio, DeSantis reportedly wasn’t invited to attend and will hold his own campaign event ​in three cities elsewhere in the Sunshine State.

Trump is well known for dubbing his political opponents with nicknames, a practice he exploited during his presidential runs in 2016 and 2020.

He mocked his Democratic challenger Hillary Clinton as “Crooked Hillary.”

In his 2020 race against President Biden, he repeatedly called his rival “Sleepy Joe.”