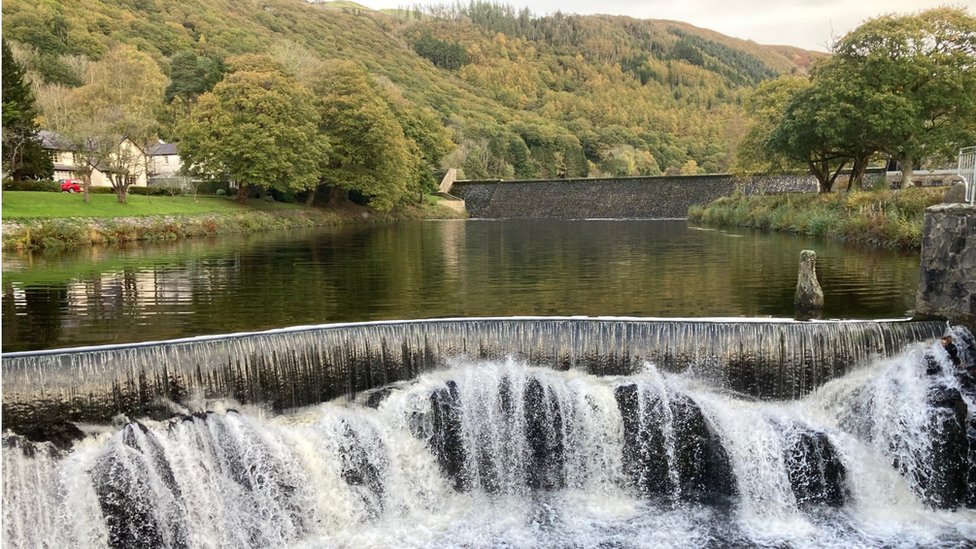 Hidden away in a remote valley you’ll find one of the UK’s oldest renewable power stations.

For 60 years, Rheidol Hydropower Plant, near Aberystwyth, has been generating clean electricity from abundant rain.

Operators say Wales has the key ingredients to be a “strong player” in producing green energy, but the Institute of Welsh Affairs has warned progress has been too slow.

The Welsh government said it had bold ambitions to meet energy needs.

It is set to talk later about its plans to tackle climate change, while world leaders are meeting in Egypt for the COP27 summit.

Renewable sources like wind, solar and hydro meet 56% of Wales’ electricity demand, but the Welsh government hopes this will reach 70% by 2030, although this is currently under review.

People are “always surprised” when they stumble across the vast hydro power plant in the scenic Cwm Rheidol valley, according to boss Dennis Geyermann.

“But this is the story of renewable energy – it brings interesting, high tech jobs into rural areas,” he said.

Made up of a series of interconnecting reservoirs, dams, underground tunnels and power stations, it is the largest project of its kind in Wales and England.

Since 2008, it has been owned by Statkraft, an offshoot of the Norwegian government, and Europe’s largest producer of renewable power.

From here the firm’s other renewable energy schemes – as far afield as the Scottish highlands – are also monitored 24 hours a day.

“This is kind of like the brains of the operation,” explained Mr Geyermann, vice president for operations and maintenance.

He said the company – which recently announced it hopes to develop a new green hydrogen plant in Pembrokeshire – had a “large project pipeline for the UK”.

And Wales, in particular, could be “a strong player when it comes to renewable energy”, he added.

“We have the right landscape, we have enough rain and wind and there’s a great coastline.

“The Welsh people are up for it too,” he said.

Sarah South, who is responsible for health and safety at Statkraft UK, grew up nearby and recalled fishing with her father in the scheme’s reservoirs, as well as countless school trips to the site.

She said she would encourage young people to gain the skills needed to take advantage of the “big push” towards green energy.

“Your English, sciences, maths, geography – you might think they’re boring subjects in school – but they’ll be really important,” she said.

“It’s such a big industry that’s coming through now, and so important to the future of the world.”

Built in 1962, long before concern about climate change filled the headlines, Rheidol’s hydropower scheme has witnessed an energy revolution in the UK.

At the time, virtually all our power came from burning coal.

Fast forward to 2020 and, for the first time in more than 200 years, the official energy statistics showed coal had played no part in Wales’ energy generation mix.

And 56% of the country’s electricity demand is now met from renewable sources like wind, solar and hydro.

Officially, the Welsh government’s target is to reach 70% by 2030, though that is currently under review.

‘Progress is too slow’

Auriol Miller, director of the Institute of Welsh Affairs, said progress had, so far, been too slow.

“We’ve got to look higher, further and faster in terms of those targets,” she argued.

The think tank has urged Welsh ministers to aim for 100% by 2035 in a series of reports in recent years.

Scotland, by comparison, is virtually already there.

Neil Lewis, founder of Carmarthenshire Energy which has helped develop wind, solar and electric vehicle projects across the county, said it took too long to get schemes off the drawing board.

“We have colleagues who’ve built community-owned windfarms which have taken 10 to 20 years to get permission to build them,” he said.

“It’s really important that we speed up our efforts.”

Meanwhile, the Senedd’s climate change committee has also expressed concern over a slowdown in renewable energy development since 2015.

The Welsh government, which this year carried out what it described as a deep dive investigation into the barriers facing renewable energy, has pledged new targets by next summer and a national energy plan by 2024.

It also announced earlier this month that it was setting up a state-owned renewable energy developer for Wales – in a UK first.

In a statement, the Welsh government said it has “bold ambitions for renewable generation to at least fully meet our energy needs in Wales – while receiving a fair share of its wealth and value”.

It said it was “making progress towards our targets but we need to go further and faster”.

“We are supporting local organisations to tackle climate change and we will support businesses to develop their staff for the clean energy future,” it added.

“In this cost of living crisis, we must focus on finding the most affordable, least impactful solution as the decisions we make today will have a massive impact on generations to come.”