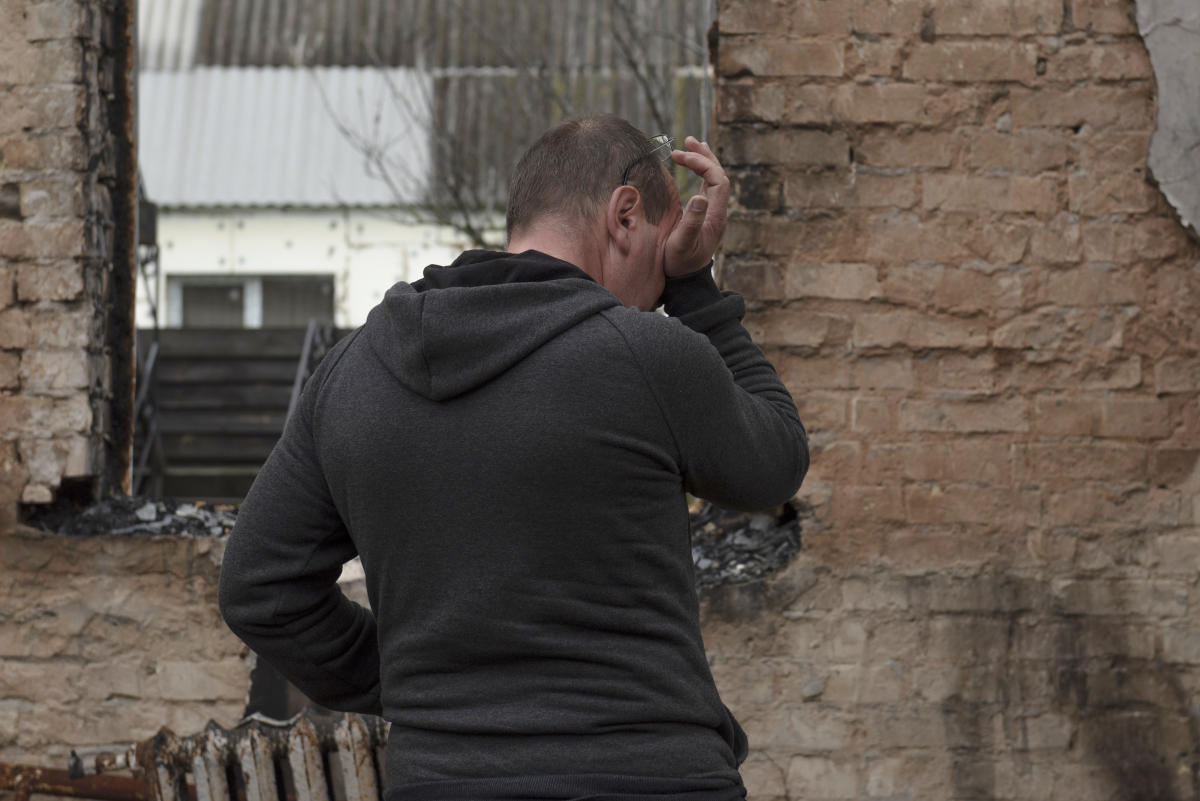 MOSCHUN, Ukraine (AP) — Standing amid the wreckage of his home, Vadym Zherdetsky shows photos on his phone of how it once looked: handsome rooms, a hand-carved wooden bed and a chest of drawers he intended to leave to his grandchildren.

When Russia invaded Ukraine in February, two missiles struck the house in the tiny village of Moschun on the outskirts of the capital, ripping off the roof and nearly killing four family members. The town was recaptured from Russian forces in April, but Zherdetsky’s house, like many others in the Kyiv region, remains in ruins.

“Everything changed. Our lives changed,” the 51-year-old said, wiping away tears. “Thank God it was only property, and we are alive and healthy. … I don’t know where our kids and grandkids will live. I don’t know anything.”

More than six months after Russian forces retreated from the towns around Kyiv, residents of those communities are still struggling to rebuild their lives. An estimated 1 million people — half the number who fled the region — have returned, according to local authorities. But many no longer have jobs, cannot afford to fix their houses and say they need more assistance.

Nearly $350 billion is needed for reconstruction across the war-ravaged country, and that amount is expected to grow, according to a report issued in September by Ukraine’s government, the European Commission and the World Bank.

Burdened with the fighting and frequent Russian attacks on the country’s power system, the Ukrainian government strains to carry out the most urgent repairs to civilian residences. This month it plans to send 1,000 crews to do as much work as possible before winter, including fixing 117 high-rise buildings in the Kyiv region, the area’s military administration said.

People submit photos of their destroyed homes to a government app to receive compensation. However, large-scale reconstruction — such as the $300,000 that Zherdetsky estimates is needed to repair his house — has yet to begin.

Moschun, with a population of about 1,000, was hit hard at the start of the war. Approximately 37 people were killed and 160 homes destroyed, residents say. The town was occupied by Russian troops for nearly six weeks.

Walking through the debris, Zherdetsky nostalgically points to the carefully constructed archways he designed to allow two of his grandchildren to ride through on their scooters at the same time, he said.

He and his wife have moved to a cramped space above a convenience store they own on the edge of town. He’s now earning about 10 times less than he did before Russia’s invasion because prices have spiked and people don’t have money to spend, he said. The drop in income has prevented him from buying building materials and warm clothes ahead of winter, he said.

Reconstruction is challenging, especially since 60% of the country’s budget is allocated for the war, Oleksiy Kuleba, head of the Kyiv region military administration, told The Associated Press.

“The Kyiv region is bombarded with missiles and drones … We understand that everything is not happening as quickly as we would like, but 28,000 objects were damaged in the region. We will rebuild them all,” said Kuleba, who said housing is a priority.

Moscow is targeting Ukraine’s energy infrastructure to drive the nation into the cold of the impending winter. Since early October, it has destroyed approximately 40% of the country’s energy system, forcing Ukraine to impose rolling blackouts while racing to stabilize the grid.

The strikes drew a warning from the mayor of Kyiv, who said that residents should be prepared for the worst this winter, including the threat of having having no electricity, water or heat.

Worried that the energy system will not hold, the government is urging Ukrainians who fled the country not to return until after winter, said Iryna Vereshchuk, the minister for the reintegration of the Russian-occupied territories.

Analysts warn that displaced people should be cautious about going back to areas around Kyiv that have been regained by Ukraine because some are not yet fully secure, especially with Russia’s military buildup in neighboring Belarus, which poses a risk of a renewed invasion from the north.

In the quest for assistance, Ukraine “still struggles to mobilize donors for rapid rebuilding and necessary security measures,” said Orysia Lutsevych, head of the Ukraine forum at Chatham House, a London-based think tank.

Some aid groups are trying to help those who have returned. The International Committee of the Red Cross gave two generators to help Moschun cope with power cuts, as well as insulation to help prepare buildings for the fast-approaching cold, said Achille Despres, committee spokesman in Ukraine. In July, other organizations provided some 60 prefabricated houses for those without shelter.

Yet Moschun locals worry that even with heaters, those temporary houses won’t be warm enough come winter. Many say they feel abandoned.

“It’s like a dead city,” said Nataliya Perekhrestenko, the deputy administrator of Moschun. “We feel like no one cares about us.”

Follow AP’s coverage of the war in Ukraine: https://apnews.com/hub/russia-ukraine