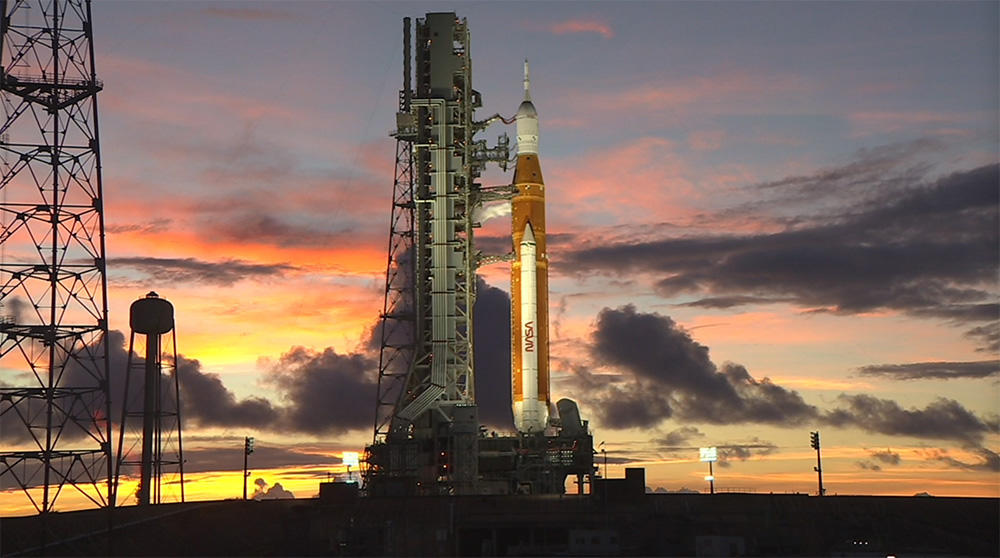 Engineers were optimistic the new procedures would ensure a smooth transition from slow to “fast fill,” the point during earlier fueling attempts when a sharp ramp-up in pressure caused leakage in quick-disconnect umbilical seals at the base of the rocket’s core stage.

“We are more confident than we have ever been in our loading procedures and how to do it in such a way that puts the least amount of pressure on the seals,” said Jeremy Parsons, deputy manager of Exploration Ground Systems at the Kennedy Space Center.

“We’re allowed to have a momentary transient as we up (the) pressure, because … it would just be for a short time period. And that’s really the worst case that we saw during (the most recent) tanking test. So feeling pretty good right now about that going into it.”

This time around, the rocket’s tanks were filled without incident. But late in the countdown, a valve used to replenish hydrogen in the core stage developed an intermittent leak. A three-man “red crew” was sent to the pad to tighten bolts around the valve in a bid to minimize the leakage and keep the countdown on track.

At that instant, computer commands will be sent to detonate four massive explosive bolts at the base of each booster, freeing the 5.7-million pound SLS to climb away atop 8.8 million pounds of thrust, briefly turning night into day as it roars skyward on a slightly northeasterly trajectory.

Rapidly accelerating as it consumes propellant and loses weight, the SLS was expected to be moving faster than sound less that one minute after liftoff. One minute after that, the two strap-on boosters were expected to burn out and fall away leaving the four engines powering the core stage to continue the climb to space.

Eight minutes after liftoff, the flight plan called for the the SLS second stage and the attached Orion capsule to separate from the core stage in an initial elliptical orbit tilted 34 degrees to the equator. The core stage, meanwhile, will be left to fall back into the atmosphere to break up over an unpopulated stretch of the Indian Ocean.

Two critical “burns” were required of the single engine powering the Interim Cryogenic Propulsions Stage, or ICPS: one to raise the low point of the initial orbit and a second to propel the Orion out of Earth’s gravitational clutch and on to the moon. The 18-minute-long trans-lunar injection, or TLI, burn was expected about 90 minutes after launch.

The Orion capsule was expected to separate from the ICPS about two hours after launch, voyaging on to the moon for a 60-mile-high flyby Monday, using lunar gravity to fling it into a distant orbit that will carry it farther from Earth than any human-rated spacecraft.

The Artemis 1 mission is the first in a series of SLS/Orion flights intended to establish a sustained presence on and around the moon with a lunar space station called Gateway and periodic landings near the south pole where ice deposits may be reachable in cold, permanently shadowed craters.

Future astronauts may be able to “mine” that ice if it’s present and accessible, converting it into air, water and even rocket fuel to vastly reduce the cost of deep space exploration.

More generally, Artemis astronauts will carry out extended exploration and research to learn more about the moon’s origin and evolution and test the hardware and procedures that will be necessary before sending astronauts to Mars.

The goal of the Artemis 1 mission is to put the Orion spacecraft through its paces, testing its solar power, propulsion, navigation and life support systems before a return to Earth December 11 and a 25,000-mph plunge back into the atmosphere that will subject its protective heat shield to a hellish 5,000 degrees.

Testing the heat shield and confirming it can protect astronauts returning from deep space is the No. 1 priority of the Artemis 1 mission.

If all goes well with Artemis 1, NASA plans to launch a second SLS rocket in late 2024 to boost four astronauts on a looping free-return trajectory around the moon before landing the first woman and the next man on the lunar surface near the south pole in the Artemis 3 mission.

That flight, targeted for launch in the 2025-26 timeframe, depends on the readiness of new spacesuits for NASA’s moonwalkers and a lander being built by SpaceX that’s based on the design of the company’s reusable Starship rocket.

SpaceX is working on the lander under a $2.9 billion contract with NASA, but the company has provided little in the way of details or updates and it’s not yet known when NASA and the California rocket builder will actually be ready for the Artemis 3 lunar landing mission.

But if the Artemis 1 test flight is successful, NASA can check off its requirement for a super-heavy-lift rocket to get the initial missions off the ground and on to the moon.