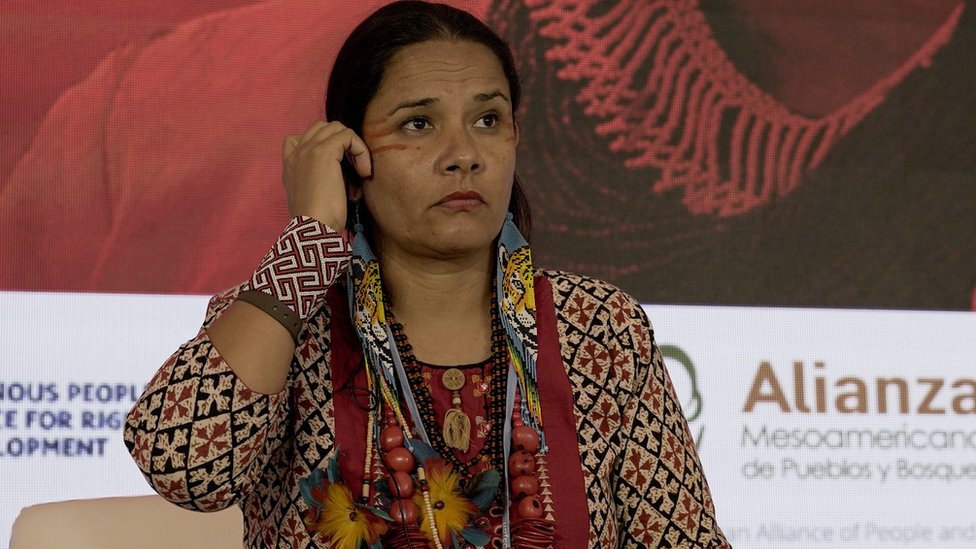 Too few women are participating in COP27 climate negotiations, charities, activists and politicians have warned.

BBC analysis has found that women make up less than 34% of country negotiating teams at the UN summit in Egypt.

This is despite evidence that females bear a disproportionate burden from climate change.

Government officials and campaigners say that without greater representation climate change can’t be tackled and women’s lives will worsen as a result.

Shirley Djukurna Krenak, an indigenous woman of the Krenak people of Minas Gerais, Brazil, told the BBC that women have always been “fighters” for the planet.

Shirley told the BBC that indigenous women in particular have always fought for environmental protection and “need to be respected and people need to listen to us”.

Last week world leaders gathered at the COP27 summit and took the inaugural ‘family photo’. There were 110 leaders present, but just 10 were women.

This is one of the lowest concentrations of women seen at these UN climate summits – known as COPs, according to the Women’s Environment and Development Organisation (WEDO), which tracks female participation at such events.

The male skew among leaders reflected a broader trend across the delegation teams that countries have sent. Analysis by the BBC of the participant list found that less than 34% of country negotiation staff were female. Some teams were more than 90% male.

These delegation teams participate in negotiations at the conference on key climate issues such as funding and limiting use of fossil fuels.

In 2011 countries pledged to increase female participation at these talks, but the share this year has fallen since a peak of 40% in 2018, according to WEDO.

Dr Jeanne d’Arc Mujawamariya, environment minister for Rwanda – which has 52% women in its cabinet – told the BBC the outcomes of the negotiations will be affected by the lack of women participating.

This was a sentiment echoed by Rep. Kathy Castor, chair of the US Select Committee on the Climate Crisis. She told the BBC at COP27 that women’s presence was vital.

“It is absolutely fundamental to climate action that we educate young women and girls, but that means they must have a seat at the table at international conferences,” she said.

On Monday, a new report by charity ActionAid revealed that women and girls are facing increased and specific risks as the climate crisis worsens.

The report reveals that in many developing nations – which are facing the worst impacts of climate change – women have greater responsibility for securing water, food and fuel for their families, which can be more difficult during floods, drought or other climate-related crises.

The majority of agricultural workers are also women, so when there is severe drought, as seen currently in East Africa, their income can be drastically cut. The UN has estimated that 80% of people displaced by climate change are women.

Dr Sila Monthe is an International Rescue Committee health manager currently working in Kakuma Refugee Camp in Kenya. She told the BBC that she has seen increased nutrient deficiencies in women and young girls in the drought-affected area “as they often eat last, and worst”.

There are also concerns that as women go further afield to collect food and water they are exposed to increased risks of violence.

Sophie Rigg, senior climate advisor at ActionAid, told the BBC that climate change is exacerbating gender inequalities and the solutions being discussed at COP27 must be tailored to the specific issues being faced by women.

And young women are currently leading the charge on taking climate action, according to the UN. Some of the most famous legal cases brought against governments for inaction on climate change, have been brought by women.

Global director for gender at the World Bank, Hana Brixi, said there is increasing evidence that having women participating improves the outcomes in global negotiations like COP27.

Ms Rigg from ActionAid UK agrees: “There is no getting around when women are in the room they create solutions that are proven to be more sustainable.”

Because of this Ms Brixi said that she is seeing progress in female participation as organisations and governments wake up to the impact they can have.

Ms Castor, from the US delegation, said that her country’s negotiators have raised the issue of female participation with this years’ hosts in Egypt and will be doing so with other countries.