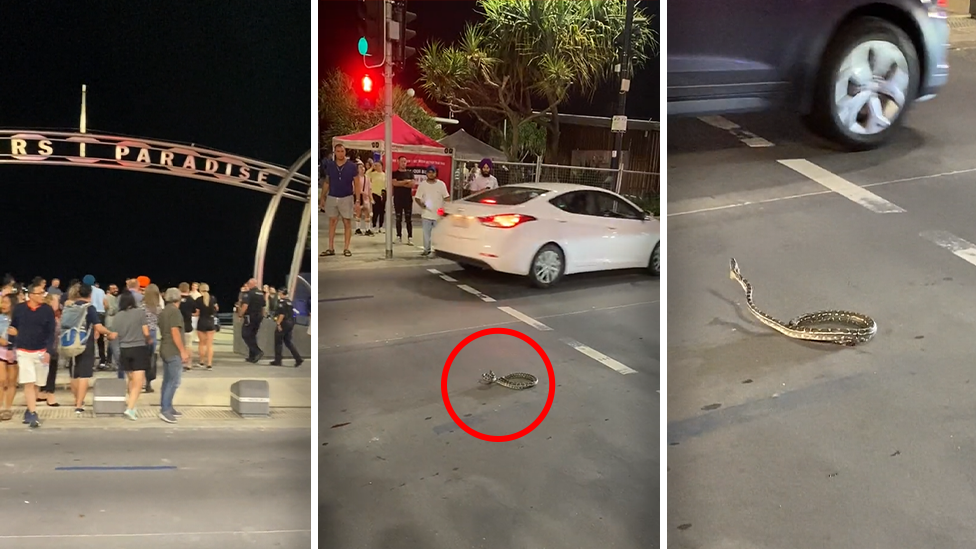 A video, uploaded to TikTok this week, shows the frightened python sitting in the middle of the road, hissing and striking at a car that breezes past.

At the traffic lights, a small crowd watches on filming with their phones. Others seem oblivious to the snake’s plight and pose for photos on the boardwalk.

For a moment it appears the stranded animal will be flattened by a car. The footage then cuts to a man holding the snake by the end of its tail and walking it out of harm’s way.

Reacting to the video, many social media users marvelled at the snake’s appearance at the popular tourist spot.

“Omg how did it get to surfers?” one person wrote. “How the hell did it end up in the middle of the road?” another person wondered. “Poor thing would of been so scared,” someone else added.

Is it common to see wildlife around Surfers Paradise?

While Surfers Paradise often swarms with holidaymakers, it’s not unusual for snakes and even predatory birds to visit the area and become displaced. Wildlife rescuer Amy Wregg has been called to assist two barn owls within metres of where the snake was found.

Ms Wregg is an expert rescuer who works for WIRES during the day and volunteers for WildCare at night. When it comes to navigating lost wildlife in urban areas she has a few key tips.

“Obviously the motorist’s safety is the priority and we don’t want them to cause an accident,” she said. “If it’s safe to do so they should pull over, get someone to direct traffic, and call a rescuer to help retrieve it.”

Was the Gold Coast snake harmless?

Many people reacted to the video on TikTok saying the snake was harmless as it was a python. “It’s only a python, go pick it up,” one person wrote. “Mate was just enjoying watching the cars go past,” someone else joked.

But, people without expertise should reconsider moving the snake themselves as they risk both harm to the snake and to themselves, according to Ms Wregg.

“If you don’t know how to handle the snake or what type it is, I would generally say don’t touch it and leave it to a professional,” she said. “If you pick it up by the tail and you’re not supporting the bodyweight of the snake you can also injure it.”

Ms Wregg warns that people who don’t know how to read a snake’s behaviour are at risk of being bitten. Some species have the ability to strike prey at a distance equal to their body length.

That means picking up a snake by its tail can be a dangerous move. While the snake in the video appears to be a non-venomous coastal carpet python, they still have the ability to inflict a nasty bite.