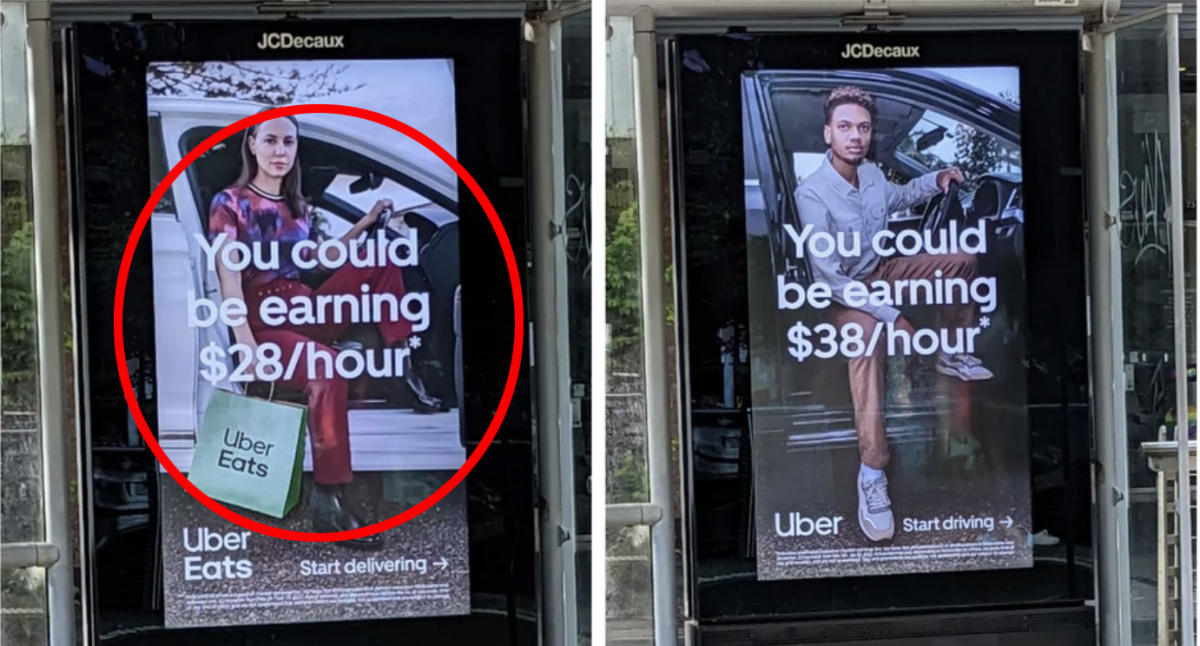 A series of advertisements for Uber drivers in Melbourne has outraged people online with many accusing the company of “blatant sexism”.

“This is clearly an outrageous example of inequality and I don’t need to even read the words on the ad to come to that conclusion,” one person wrote on Reddit. “[This is] proof of the gender pay gap,” another said.

In a post that has since gone viral, images of the two ads were shared on reddit. Both digital posters appear to be featured on the same tram stop, potentially as rotating ads.

“Hang on a second Uber.. What’s going on here?” the original poster wrote.

While at first glance it appears that the difference between the two wages is based on gender, the difference is due to one being Uber Eats and the other being the higher-paying Uber rideshare. In the Uber Eats ad featuring the woman the closing slogan is ‘start delivering’, while the other ad says ‘start driving’.

In a statement to Yahoo News Australia, Uber confirmed that “there is no difference to how women’s earnings are calculated with the Uber app compared to men’s earnings.

“These are two distinct advertisements that clearly relate to the separate sides of our business, Uber and Uber Eats,” a spokesperson for Uber said. “We regularly feature a range of diverse talent in our advertising and this campaign does feature both men and women across both lines of business.”

While many Reddit users understood the difference they weren’t satisfied, referring to the “unfortunate advertising” as a “bit inappropriate.” “I get the difference but really, the marketing department flunked this one, they should’ve spotted this,” one person wrote. “The choice of models is a bit unfortunate,” another said.

While others said that it was disappointing to see “the subconscious bias of the man working the higher-paid role.” [It] would have been more interesting if the woman was the one in that position,” one person wrote. While another sarcastically remarked that it was “nice to see the stereotype of women earning less than men perpetuated in their [Uber’s] advertising.”

But for some, the difference in the ads was very clear. “Well clearly one is delivering food and the other is delivering people,” one person wrote. “Uber Eats vs Uber, there’s nothing going on here lol,” another user added. “People in this thread are getting worked up over nothing,” someone else said.

Deliveroo pulls out of Australia

The bungle comes after delivery rival Deliveroo announced on Wednesday afternoon that it was shutting down in Australia, effective immediately.

One of the country’s first meal delivery services revealed that it had been placed into voluntary administration and could no longer operate without making a significant investment in Australia to challenge its competitors.

The move will impact 120 staff members as well as 15,000 delivery partners and more than 12,000 restaurants who used the service.