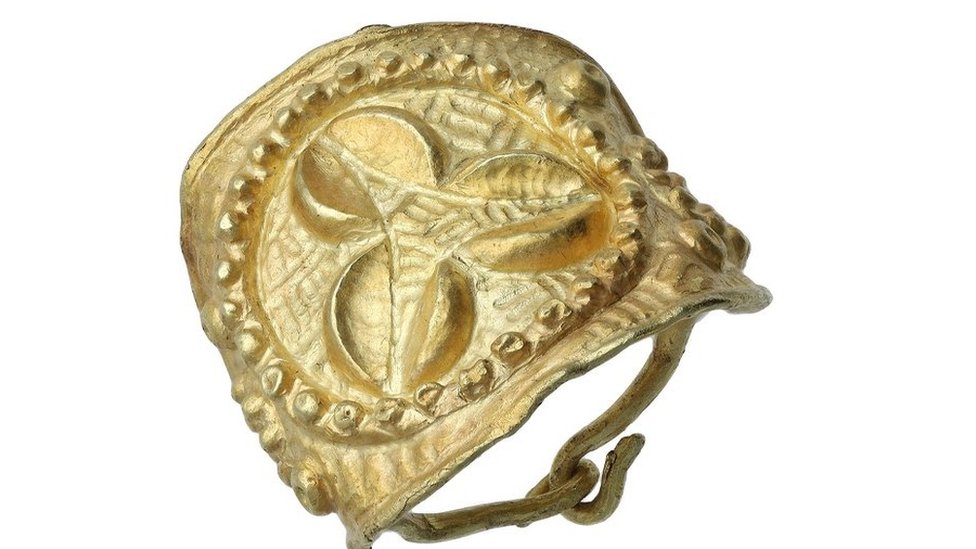 A 2,000-year-old gold ring believed to have been worn by a Celtic ruler could go on display in York after being sold at auction for £36,000.

The “jaw-dropping” jewellery was bought by a British private collector on Wednesday after it spent the last 28 years in its previous owner’s cupboard.

The buyer planned to loan the ring to a museum so it could be viewed by the public, auctioneers Noonans said.

The Iron Age ring was unearthed in a field in North Yorkshire in the 1990s.

Dating back to about 100BC, it was thought to have been worn by a chieftain of the Corieltauvi tribe, which ruled parts of what are now the Midlands and Yorkshire before the Roman invasion.

Nigel Mills, specialist in ancient jewellery at Noonans, said: “We were delighted with the result of this beautiful ring.”

He added that the auction house was “so pleased” the item was staying in the UK.

The ring’s buyer was in discussions with York Museums Trust about loaning it for public display, he added.

The artefact was dug up by a metal detectorist in Knaresborough in 1994 who then sold it on to a collector for a few hundred pounds.

The collector, a 66-year-old man who wanted to stay anonymous, kept the ring in a cupboard for nearly three decades before deciding to get it valued this year.

He previously told the BBC: “It’s jaw-dropping. It’s not quite King Arthur’s ring, but it’s the next thing down.”

The ring’s distinctive abstract design has been linked to the Iceni tribe, which once ruled a large part of modern day East Anglia.

It is thought it could have ended up in what is now Yorkshire as part of a treaty between feuding tribes.

Mr Mills said: “There is no other ring of this style which exists. It’s an incredibly important piece.”