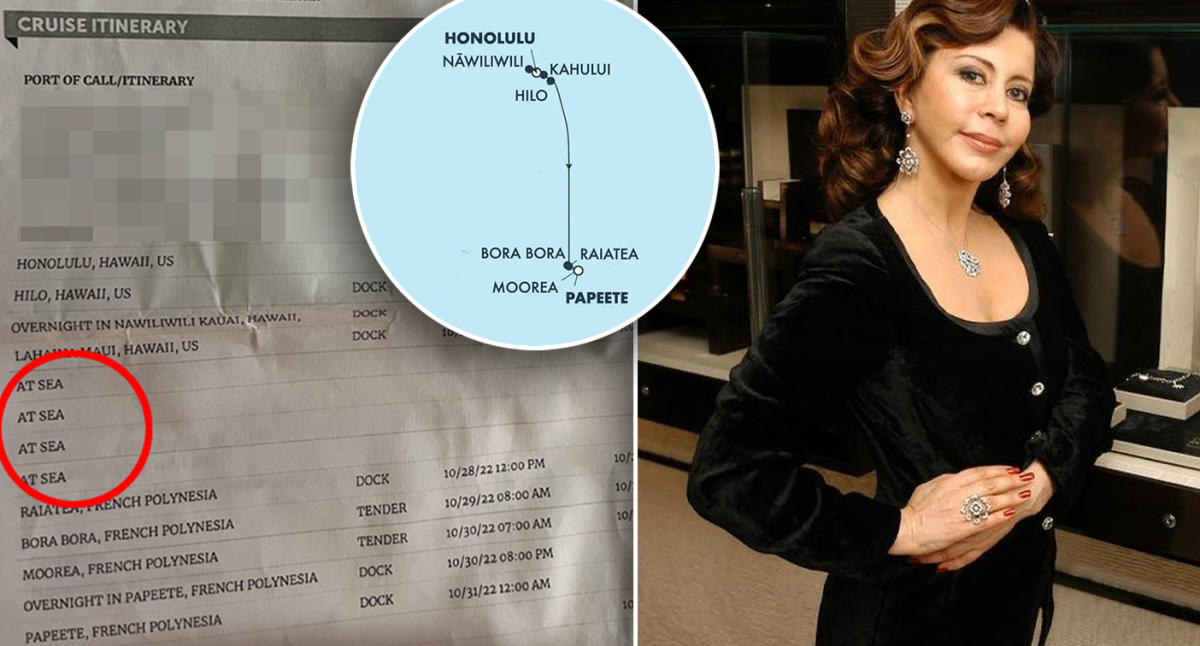 A couple on their honeymoon on the same Pacific cruise where a Tiffany’s jewellery tycoon mysteriously disappeared overboard have revealed they witnessed a series of “unsettling” events while on the ship.

Dilek Ertek, a 69-year-old distributor for the luxury jewellery line in Turkey, was travelling aboard the Norwegian Spirit cruise line from Hawaii to Tahiti, where she had reportedly planned to celebrate her birthday in Bora Bora.

On Tuesday October 25, Ms Ertek was reported missing to staff as the ship sailed through the Pacific Ocean towards French Polynesia. She was travelling with her boyfriend at the time, a Swiss national, who reported her missing around 18 hours later, according to Tahitian news reports. Despite search efforts involving the US Coast Guard, her body was never recovered.

Ms Ertek’s family and friends held a funeral for her on Monday with few answers to her untimely death. Questions remain as to how Ms Ertek, who stood at 5’2” (1.57 metres), could have accidentally fallen over the ship’s 3-foot (91cm) high rails. Ms Ertek’s son, Gökçe Atuk, travelled to Tahiti after receiving the news where he was given his mother’s belongings including her passport, credit cards and cash – but no jewellery or watches. It in unclear if the jewellery is missing or if she never took any on the trip.

Stephen and Jessica Benet, from Michigan, were celebrating their honeymoon on board the Norwegian Spirit and witnessed an “odd” exchange between Ms Ertek and her partner just two days before her disappearance.

The cruise had left Honolulu on October 19 and was docked in Maui on October 23 for the day. Guests could travel to the island to explore via a tender, a small boat used to transport passengers to and from the ship. On one of the tenders returning to the ship, Mr and Mrs Benet sat next to Ms Ertek and her boyfriend.

It was because of this interaction that Mr Benet and his wife recognised the man just two days later on October 25, when being questioned by staff about Ms Ertek’s whereabouts. By now the ship was in its second day of four straight days at sea, travelling from Maui to Raiatea. Ms Ertek’s day on Maui would’ve been the last time she was on land.

“It was so unsettling. He was being questioned by at least two officers and four security guards at the same time,” Mr Benet said. “One of the officers was frustrated with him because she said he kept contradicting himself. She asked him when he last saw her and he said yesterday evening. She said, ‘that is not what you said earlier’.

“He was very animated and so were some of the officers so naturally it caught our attention. We could also see them passing out printed pictures of her to security workers.”

Mr Benet said passengers were never informed directly that someone had fallen overboard. Instead, staff called over the PA system “at least five or six times” that night asking for Ms Ertek to report to guest services.

“They also came to our cabin with a printed picture of her and asked us if we had seen her and searched our cabin. My wife asked a crew member the next day if they found her and they said they could not say anything. We knew something bad had probably happened to her but the staff obviously would not say anything.” According to Mr Benet, speculation was rife among guests surrounding Ms Ertek’s disappearance.

On two more occasions after Ms Ertek disappeared, Mr Benet claims he saw the man as the ship sailed towards French Polynesia.

“Both times I saw him he was in the buffet by himself during low traffic times such as 3-4pm. He was also using a satellite phone the crew had clearly given him as reception was bad the whole trip for obvious reasons,” he said.

Mr Benet said the cruise continued to its next port and let passengers off for a day trip, despite Ms Ertek’s disappearance and her partner being kept under observation. The couple tried to enjoy their honeymoon, but found it difficult under the circumstances.

“It put a huge damper on the next two at sea days. When we got to our next port after her disappearance and nothing happened it went to the back of our minds a little,” Mr Benet said. “We were assuming they would tell us all something when we got to land. We did still have a good time because once nothing happened at the port we tried to focus on our excursions and not the situation. But when we were at sea it was honestly almost all we could think about.

“I just feel so so bad for her family. I have lost close loved ones the past few years but I can’t imagine what they are going through with all this uncertainty about her disappearance,” Mr Benet said.

Ms Ertek’s partner was questioned by authorities in Tahiti but was released and returned to Switzerland. According to Turkish newspaper Hurriyet, the man has been uncontactable since his return to his home country.

“On Wednesday, Oct. 25, 2022, Norwegian Spirit was notified that a 68-year-old female guest went overboard while the ship was sailing in the Pacific Ocean on its way to French Polynesia. The authorities were notified and the United States Coast Guard conducted a search and rescue operation. The investigation is ongoing and we will share updates as appropriate. Our thoughts and prayers are with her loved ones during this difficult time.”