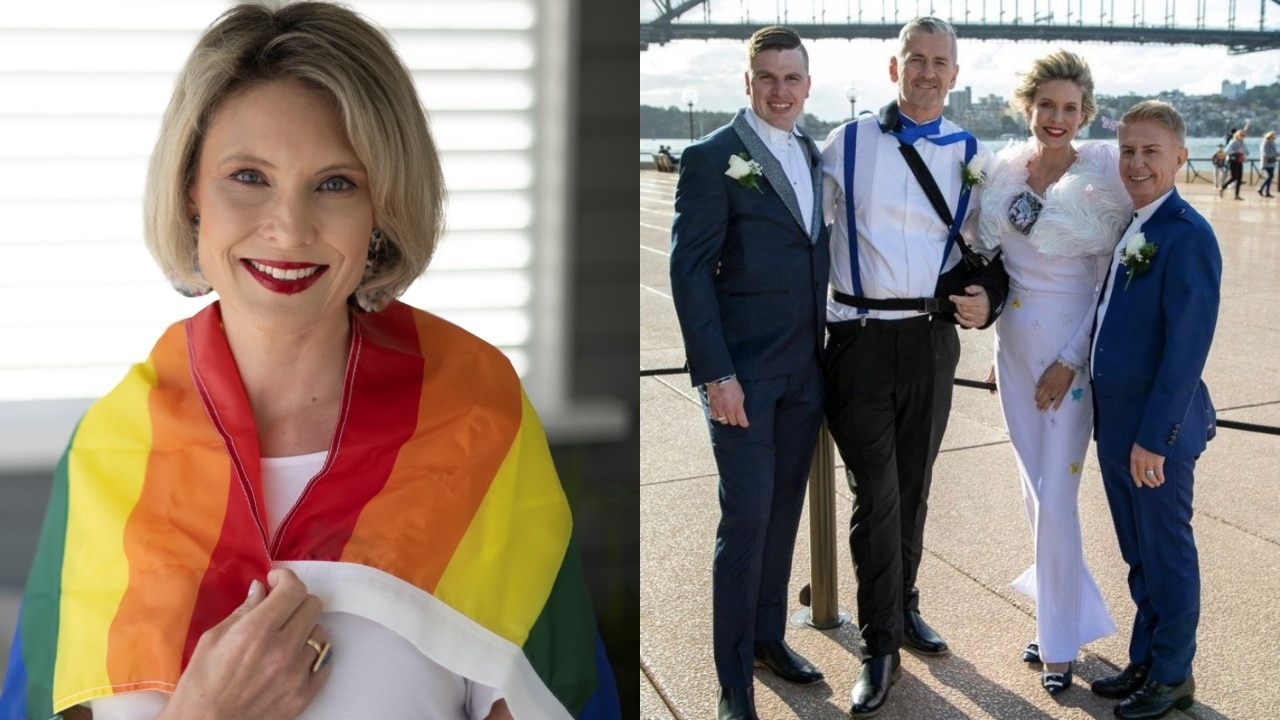 Of all of the untruths and distortions attributed to me in my public life there is one lie that hurts more than any other, and that is the completely groundless accusation that I am homophobic.

No notion could be further removed from the reality of my life.

Starting right here in my home, the man I have entrusted with the care of my three precious daughters from day to day is gay, and is a beloved member of our family.

His husband stood by my side as part of my team on election day.

On the subject of family, my dear brother, of whom I am so outrageously proud, is a gay man who is a loving, caring and gorgeous uncle to my children.

Along with my partner and father, these are the most important men in my life.

It sickens me to read claims that my representations on behalf of women and girls for fairness on the sporting field are twisted in such a way to expose me to vicious and vexatious accusations of homophobia.

My belief in protecting girls and women from the unfair consequences of competition against biological males should be seen for precisely what it is.

Apart from my own pain, you can imagine how upset my gay and lesbian inner-circle friends become when they see these scurrilous claims made about my integrity.

The same gay friends include a couple who recently invited me to officiate at their wedding on the Opera House forecourt; I was so proud to be invited to play such a crucial role in their lives.

I am determined not to be persecuted in the same way that another well-known former Liberal Party candidate has become a piñata for the left-wing since launching her political career.

Pauline Hanson was characterised as a racist and xenophobe, at one point even accused of white supremacy, when in fact she was on a mission to protect Australian jobs.

We are from different political parties, but my empathy is a little more than rich when it comes to the way in which we have both been maliciously maligned.

There are extremists who wrap themselves up in the proud flag of the LGB movement, coming after me and many other women, even other gays and lesbians who do not agree with the addition of the TQA+, by using this cover to legitimise completely baseless attacks.

Because of their rainbow camouflage, the sight of this banner has triggered me, but in no way does that emotional response reflect my view of the millions of people who celebrate their rights under the same flag.

In fact I have been among them, attending Mardi Gras in the 1990s in a show of support for my loved ones and my friends, and street parties in San Francisco’s Castro neighbourhood where I lived in the 2000s.

For them to steal this proud symbol and use it as a weapon against me, the irony is too rich and yes, it has caused me much emotional upheaval.

What should be the symbol of genuine pride, has become distressing because of its misuse.

Consistent with the time-honoured custom of politics, the worst enemies are found within your own ranks.

As Winston Churchill said: “the opposition occupies the benches in front of you, but the enemy sits behind you”.

In my case, the harshest critics have included Senator Andrew Bragg, Senator Simon Birmingham and the NSW Treasurer Matt Keane, who have been far more vicious than any of the opponents I faced in the Warringah election.

I would expect to be criticised by Zali Steggall and the Teals, which might explain the 3.72 per cent swing against me in Warringah.

But in confronting the explicit and baseless vile from fellow Liberal Party members at a time when a team effort was required to maximise the chances of election victory, those mavericks chose to put their own profiles and priorities above those of the collective.

If they were less interested in self-promotion and more interested in facts, they would have learned by now that international sporting federations such as FINA and World Boxing do not allow males to compete in the female category, the NHS Tavistock Children’s Gender Service is closing in disgrace with a class action being prepared, “gender critical beliefs” are protected under the UK Equality Act with the Forstarter decision, and the recent US Federal Court Neese decision determined Title IX protections are on the basis of biological sex – protecting the female-only sports category – while declaring doctors are not acting unlawfully if they provide medical care on the basis of biological sex not gender identity.

When children and adolescents are put on what are euphemistically called “puberty blockers” – arresting their physical, emotional and mental development – a side effect is infertility because they never physically mature into adults.

If this is followed by opposite sex hormones and surgeries that remove reproductive organs and remove or modify external genitalia, they are sterile and unable to have normal sexual relations.

In fact, they are anorgasmic.

None of this is reversible, and it is happening to children and adolescents here in Australia and overseas.

Such treatments leave the patient dependent on the medico-pharma industry for life, many are left regretful and with life-limiting complications.

The rising numbers of detransitioners attest to this.

There will be a parliamentary inquiry in Australia – it is only a matter of time.

One of the saddest ironies of this debate is that those who are gay or lesbian were highly probable to have been gender non-conforming growing up.

But today, these are largely the children and young people most likely to be convinced by media and social media they are “trans”, “non-binary” or “born in the wrong body”.

Despite ample evidence demonstrating almost all children with distress about their natal sex resolve this during puberty, experimental medical interventions rather than “watchful waiting” are being baked into law and policy as the solution.

We are sterilising a generation of gay and lesbian children by turning them into profit-centres.

Yet those hiding behind the credibility of the Pride flag have the audacity to attack those raising the alarm as “homophobic” and “transphobic”.

It is a profound misunderstanding of the debate to simply dismiss it as “being against the transgender community” as the Fairfax media does ad nauseum.

What is the “trans community”?

Because I fail to see what a distressed same-sex attracted teenage girl with a GoFundMe for a bilateral mastectomy has in common with a middle aged man who has decided to publicly flaunt his cross-dressing fetish full-time.

My position has always been about the sex-based rights of women and girls and the safeguarding of children.

Sex self-ID laws and policies mean men and boys can now simply self-declare they are a woman or girl, giving him the right to intrude into spaces such as toilets, change rooms, shelters and prisons, compete in the female sports category, avail himself of woman-specific services and resources including those for lesbians, and win awards, competitions, contracts and scholarships created for the benefit of females.

Anyone with an ounce of common sense recognises that this state of affairs is profoundly unfair at best and dangerous at worst.

It is woefully naïve to pretend that predatory males won’t avail themselves of this opportunity to access victims, because they can, they do and they will.

I will rest my case on the percolation of the truth that continues to emerge in defiance of virtue-signalling ideology and ignorance.