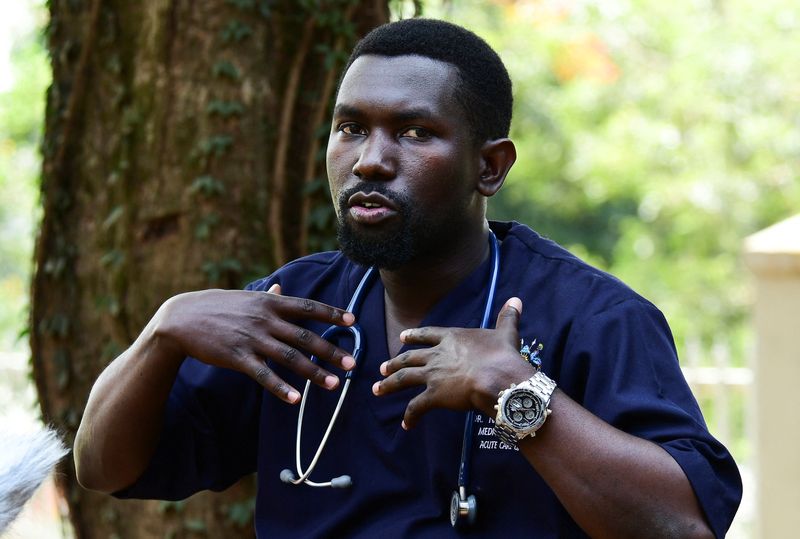 By Tommy Wilkes and Elias Biryabarema

NAIROBI/KAMPALA (Reuters) – When Ebola broke out in Uganda in September, 10 doctors immediately stepped forward to work in an isolation unit at Fort Portal Regional Referral Hospital, but now only three are left.

Staff are reluctant to work in the unit for fear of catching the deadly hemorrhagic fever, and also because of exhaustion and delayed wages, said one of the remaining doctors, who asked not to be identified as they were not authorised to talk to media.

The virus circulating in Uganda is the Sudan strain of Ebola, for which there is no proven vaccine. Total recorded cases have reached 141, with 55 dead.

“At the beginning the number of health workers willing to work in that unit was good but now we have low coverage. If we get five cases the work we do is overwhelming,” said the doctor, who avoids discussing their work for fear of being stigmatised.

“But if we all run away all of us will get sick,” the doctor said, adding the hospital sometimes lacked fluids essential for treatment.

Uganda has one of the world’s lowest doctor-to-patient ratios, with one doctor for every 25,000 people, versus the one-to-1,000 ratio recommended by the World Health Organization (WHO).

The WHO and aid groups are providing Uganda with assistance to cope with the Ebola outbreak, and the United States says it has channelled $22 million through local partners.

Yet Uganda still faces significant funding shortfalls — a WHO official said an initial $20 million the government earmarked was burned through in the first month as cases soared.

But staff coverage was 40% before the outbreak, and Ebola is now “crippling the system indirectly,” according to Dr. Alone Nahabwe, the Uganda Medical Association’s head of worker welfare.

“There are facilities where doctors and health workers are still touching patients without gloves because they (gloves) are not there,” Nahabwe said.

Government officials say after a chaotic start the situation is improving. Case numbers remain low compared with a 2013-2016 Ebola outbreak in West Africa that killed at least 11,300 people.

“The fact is we don’t have huge case numbers so we can cope,” said Bosa. “The only major fear we have is that cases come to Kampala.”

So far 20 cases have been confirmed in the capital, home to about two million people.

At the isolation unit in Mubende district, the outbreak’s epicentre, one doctor said PPE and staffing crunches had eased as case numbers fell: in his unit, 12 of 60 beds were occupied last week, down from a peak of 48.

But experts worry about cases spreading. On Sunday the first case was reported in the country’s east.

“The staff numbers that you need under IPC (infection, prevention and control), surveillance, contact tracing, the numbers are big,” said Dr Miriam Nanyunja, a WHO adviser for emergency risk management currently in Uganda.

“While the numbers of cases are not many, the geographic spread is going up,” she said. “If it goes on much longer you will need a lot more resource mobilisation.”