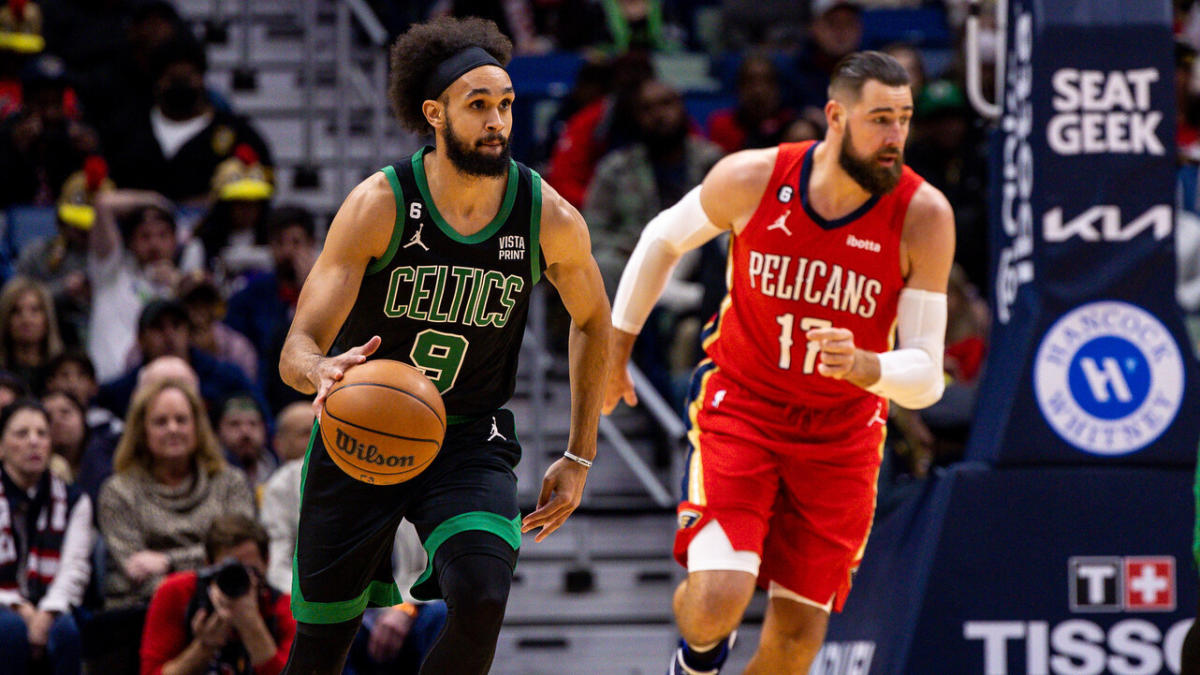 A 40-point first quarter for the C’s included 10 made 3-pointers, tying a franchise record. New Orleans cut Boston’s 19-point lead to six in the fourth quarter, but the Celtics held on to earn their ninth consecutive victory, 117-109.

Forsberg: Celtics didn’t wait to fix that ailed him

Jaylen Brown added three 3s of his own while tallying 27 points to go with 10 rebounds and seven assists, though he turned the ball over seven times. Jayson Tatum notched a double-double as well with 19 points and 10 assists.

Brandon Ingram led the Pelicans with 25 points (5-11 3-PT) and seven assists in a losing effort.

The Celtics will look to get their win streak to double-digits when they visit the Chicago Bulls on Monday night. Here are three takeaways from Friday’s victory, which brings their record to a league-best 13-3.

Derrick White has his best game as a Celtic

For the second-straight game, Derrick White put on a show as Marcus Smart‘s replacement in the starting lineup.

White did it all for the C’s on Friday night. He was at the center of the team’s 3-point outburst, shooting 6-for-8 from long range in the win. His 26 points were only three short of his regular-season career-high, and he also came oh so close to tying his career-high of seven 3s made in a game.

“I love when D-White’s aggressive,” Jaylen Brown told NBC Sports Boston’s Abby Chin after the victory. “It’s better for our team. He’s a really good player and when he finds that aggressiveness, it makes the game easier for everybody else. So D-White carried us tonight and we got a win.”

White also did his usual damage on the defensive end. He added two steals and two blocks to his stellar stat line, which arguably made for his best game since joining the Celtics last February.

The Jays’ playmaking on display

The Celtics dished 28 assists on their 41 made field goals. Stars Jaylen Brown and Jayson Tatum did their part to spread the wealth.

Brown had a team-high 27 points and 10 rebounds, but it was his seven assists that jumped off the page. Although the 26-year-old struggled to take care of the ball (seven turnovers), he made up for his mistakes with his playmaking.

Brown’s passing has improved over the last handful of games. He had eight assists in the win over Denver and six against Oklahoma City before his seven on Friday. Those three games marked his highest assist totals of the season.

It was another rough shooting night for Tatum, but he once again made his presence felt as a playmaker. The three-time All-Star’s stat line in Friday’s win was nearly identical to Wednesday’s game in Atlanta as he finished with 19 points (6-18 FG, 2-10 3-PT), 10 assists and seven boards.

Brown and Tatum’s assist numbers not only speak volumes about their playmaking abilities, but they also show this Celtics team’s impressive depth. That’s a big reason they’re off to such a hot start.

Getting Malcolm Brogdon back in the mix will be huge for this deep C’s team going forward, but the veteran point guard was off in his return to the court.

After missing the last four games with a hamstring injury, Brogdon was just 1-of-8 from the floor. He had four rebounds and four assists, but he was noticeably rusty on both ends in his 18 minutes off the bench.

Better nights are most certainly ahead for a talented player like Brogdon, so Friday’s struggles shouldn’t be much of a concern. The most important thing for Brogdon will be staying healthy, something that he has had a hard time doing throughout his NBA career.