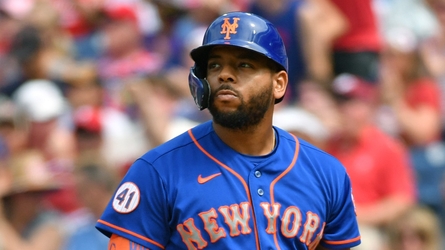 The Mets will non-tender Dominic Smith  and RHP Sean Reid-Foley, the team announced shortly after the 8 p.m. deadline Friday night.

Smith, who is entering his age-28 season, had two seasons left of arbitration and had been projected to make $4 million in 2023.

After excelling offensively in 2019 and 2020, Smith regressed badly over the last two seasons.

Smith’s massive struggles in 2022 contributed to the Mets’ DH spot being in disarray until the trade deadline, and eventually led to his demotion to Triple-A Syracuse.

After the Mets exercised their player option on Daniel Vogelbach — a lefty swinging DH option who has serious limitations in the field and on the bases — the writing appeared to be on the wall when it came to Smith’s Mets future.

The Mets also confirmed all other Mets players are signed for 2023 or will be tendered a contract.

Per MLB Trade Rumors, here’s what the Mets’ other arbitration-eligible players are projected to make next season.