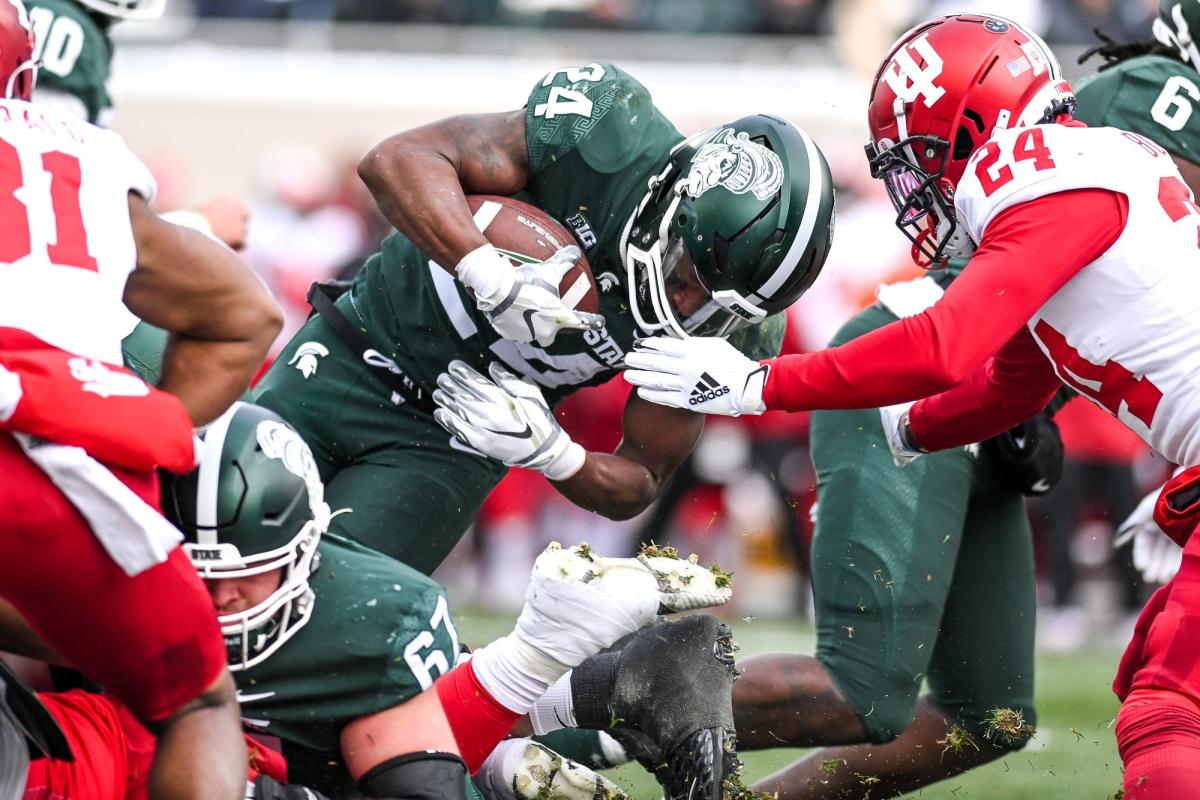 EAST LANSING – It took Indiana less than two minutes Saturday to put a major scare into Michigan State football’s quest for bowl hopes. It appeared to be a minor blip.

It turned out to be more than just fleeting fear in the frigid air. It was a harbinger of an epic disaster to come.

The Spartans blew a 17-point lead in the second half in catastrophic fashion, with breakdowns in every phase of the game. A 79-yard touchdown run by the Hoosiers’ Shawn Shivers, then an 88-yard kickoff return by teammate Jaylin Lucas. A Payton Thorne interception on the next MSU play led to a field goal. Then a ground march pulled Indiana into a tie with Josh Henderson’s 1-yard touchdown early in the fourth quarter.

MSU kicker Ben Patton missed a 22-yard field goal attempt wide left as time expired in regulation, then had a second blocked in overtime. The Hoosiers in the second overtime scored a touchdown and two-point play and kept MSU from scoring for a 39-31 victory in front of a near-empty Spartan Stadium crowd.

The crushing loss means the Spartans (5-6, 3-5 Big Ten) now must win next Saturday’s regular season finale at No. 12 Penn State to qualify for a bowl game. Game time and TV network have yet to be announced.

Shivers became the eight straight running back to eclipse 100 yards, finishing with 115 yards on 13 carries with two touchdowns, including a 1-yarder in the second overtime. Quarterback Dexter Williams II, who was 1-for-6 for 7 yards in regulation and the first overtime, hit AJ Barner for 24 yards on the first play of the second OT, then connected with his tight end for the game-winning 2-point conversion. Williams ran 16 times for 86 yards and a TD.

MSU had one final chance and got to the 10-yard line, but Payton Thorne’s pass to Jayden Reed was out of the end zone and incomplete.

The Spartans outgained Indiana 540-288, had 30 first downs to the Hoosiers’ 11 and dominated time of possession.

Indiana (4-7, 2-6), which had lost seven straight, opened the game with a 43-yard kickoff return from Jaylin Lucas to start its first drive at midfield. It took just four plays for Dexter Williams II to race around left end, slip through Xavier Henderson’s diving tackle try and dance down the sideline for a 34-yard touchdown. The replay of whether the quarterback stepped out of bounds proved inconclusive to the refs, and the call stood to give the Hoosiers a 7-0 lead just 1:48 into the game.

MSU’s defense held the Hoosiers to just 31 yards in the first half after that drive.

The Spartans answered with a 19-yard Ben Patton field goal on their next possession, stalling at the 2-yard line with two straight run plays and an incompletion.

Thorne directed a touchdown drive early in the second quarter, set up by a 29-yard run by Berger. The junior quarterback tried to hit Collins in the flat, but the throw was too fast and went through the running back’s hands. However, the ball deflected to tight end Maliq Carr, who slid and caught it for a 5-yard score, his first career touchdown catch to give MSU a 10-7 lead.

Berger blasted off a 36-yard run on the Spartans’ next possession, Thorne hit Tre Mosley for 13 yards on third-and-7and Collins finished it with a 1-yard TD run that gave MSU a 17-7 lead it carried into halftime.

The Spartans opened the second half by nearly fumbling away the kickoff, then went three-and-out after a failed flea-flicker and a dropped third-down pass from Thorne to Daniel Barker.

It took Indiana one play to get back in the game. Shaun Shivers took a handoff from Williams off the right side and found nothing but open field ahead of him. He outraced MSU safety Henderson for a 79-yard touchdown just 1:20 into the third quarter that cut the Spartans’ lead to 24-14.

MSU answered with a six-play, 69-yard drive, capped by a 31-yard run by Collins after he caught a 22-yard swing pass. Thorne also hit Reed for 22 yards on third-and-4 to extend the drive. The Spartans appeared headed to an easy win, up 31-14 with 6:17 to play.

Everything collapsed from that moment.

Lucas weaved through MSU’s kickoff coverage unit and outraced Chester Kimbrough to the end zone to make it a 10-point game 13 seconds later. Then after the Spartans took the ensuing kickoff, Thorne’s pass to receiver Germie Bernard got batted into the air after the freshman got hit just before the ball arrived. Indiana’s Jonathan Haynes snatched it out of the air at the MSU 29.

The Spartans’ defense held IU to a 40-yard field goal, but the Hoosiers tied the game with a nine-play, 70-yard drive that carried into the early fourth quarter.

Williams and Lucas set Indiana up for the tying touchdown with big runs, then Henderson converted a fourth-and-1 with a 2-yard run to get to the MSU 1. He scored on the next play, and the game was tied.

MSU marched down the field 70 yards in 14 plays, giving Patton a chance to win it with a 22-yard field-goal attempt. But the left-footed Auburn transfer missed wide left, and then he got his 28-yard attempt blocked in overtime after a high snap.