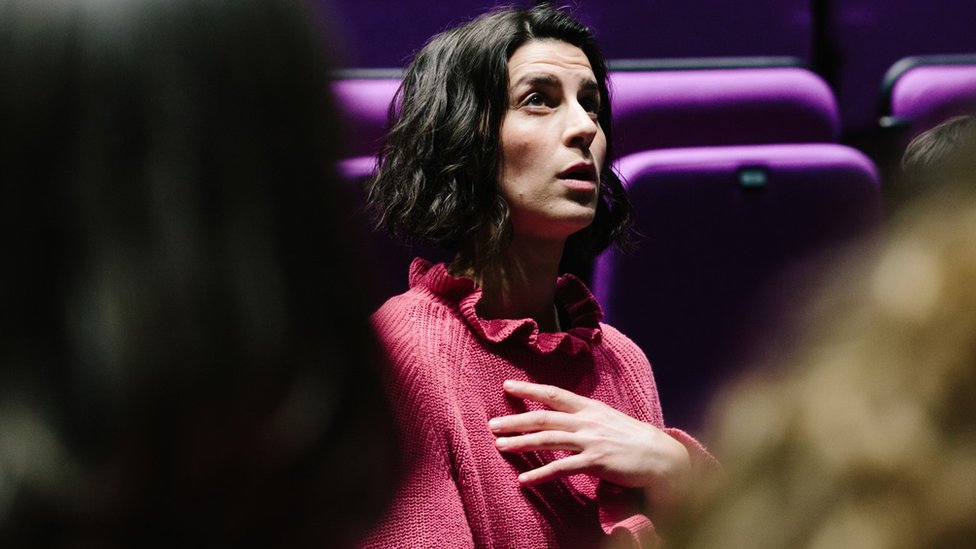 “I have this deep grief and anger around not having a second child amidst the climate crisis.”

Rosanna Selway Spencer from London said it felt “very cathartic” to share this thought with the group she had joined in Bristol.

She said it was empowering to meet others where she could talk about it in a safe space.

The project, Motherhood in a climate crisis, was started by Sophia Cheng to help people share those difficult conversations.

People who take part talk about experiencing, considering or wanting to denounce motherhood due to climate issues.

Group sessions are tailored to what the participants want to focus on but in this workshop they created monologues, devised a collective theatre piece and worked alongside a therapist for support.

Ms Cheng said since its inception, she had “never seen an outpouring of emotion quite like it”.

“They shared this flood of grief, blood, miscarriages and abortions.

“There was a lot of laughter too. The kind of conversations that I hadn’t spoken about for a long time.”

Thirty-seven-year-old Rosanna Selway Spencer shared how she experienced a “difficult internal struggle” during the project.

“In the sessions I wrote a letter titled, ‘to the second child I will never give birth to’, and it was very cathartic.”

Ms Spencer said she wanted to have a second child, but her husband did not “but since coming to this awareness of climate change, I changed my mind”.

“I had this deep sense of despair and grief around it. It’s very frightening.

“I just don’t know if I would’ve had a child if I’d have known this before?” she added

‘It was everything I’ve been scared of’

Ruby Pugh, 31, from Bristol said for her, considering not having children due to the climate crisis was “such a hard subject to broach when most of your friends are having kids”.

“I don’t want to bring new children into the world as it currently is.

“I’m going to hopefully go down the adoption route when I’m ready.

“Being able to talk about it at the workshop felt like a weight and been lifted.

“It’s a very personal thing for me. For the first session I cried and I rarely cry.

“A woman in front of me said she has kids and didn’t know how she would look them in the eye in the future and have this conversation with them.

“Hearing a mum say that was everything I’ve been scared of.

“Sharing these conversations has changed my life, it’s made me sure in my decisions. I don’t know how else I would have got to that point.”

‘We shouldn’t sacrifice our bodies’

Daniela Militaru, 37, from London said she felt embraced by the other women in the workshop.

“I didn’t know it could be so liberating and so heart warming. I felt less alone,” she said.

“It’s a topic I do not discuss in my group of friends. Many of them are mothers and they understand, but they can go only as far as they can go.

“My story came out in the workshop as a rant. Someone asked how many children is okay, some fire in me just came out.

“I don’t think that women should should sacrifice their bodies and dreams for the climate crisis. It’s something that we’ve been doing for centuries.

“One or two is fine, but having too many? Just because we can doesn’t mean we should.

“Maybe we should think about the consequences of our actions.

“I tried to talk with my mum but she only understood to a certain extent.”

Workshop facilitator and director Elizabeth Mytton said a lot of people had joined the project to find comfort about their climate crisis anxieties.

“Actually hearing their stories and witnessing them together felt empowering.

“We’re very aware that it ended up being quite a homogenous group of white and largely middle-class women.

“As a black women I thought there were lots of voices missing from this so we want to do more to ensure that a wider group of people can take part.

“We see this as phase one of the project.”

Organisers are fundraising to start the next phase of the project that will continue to work with women across the UK to tell their stories.