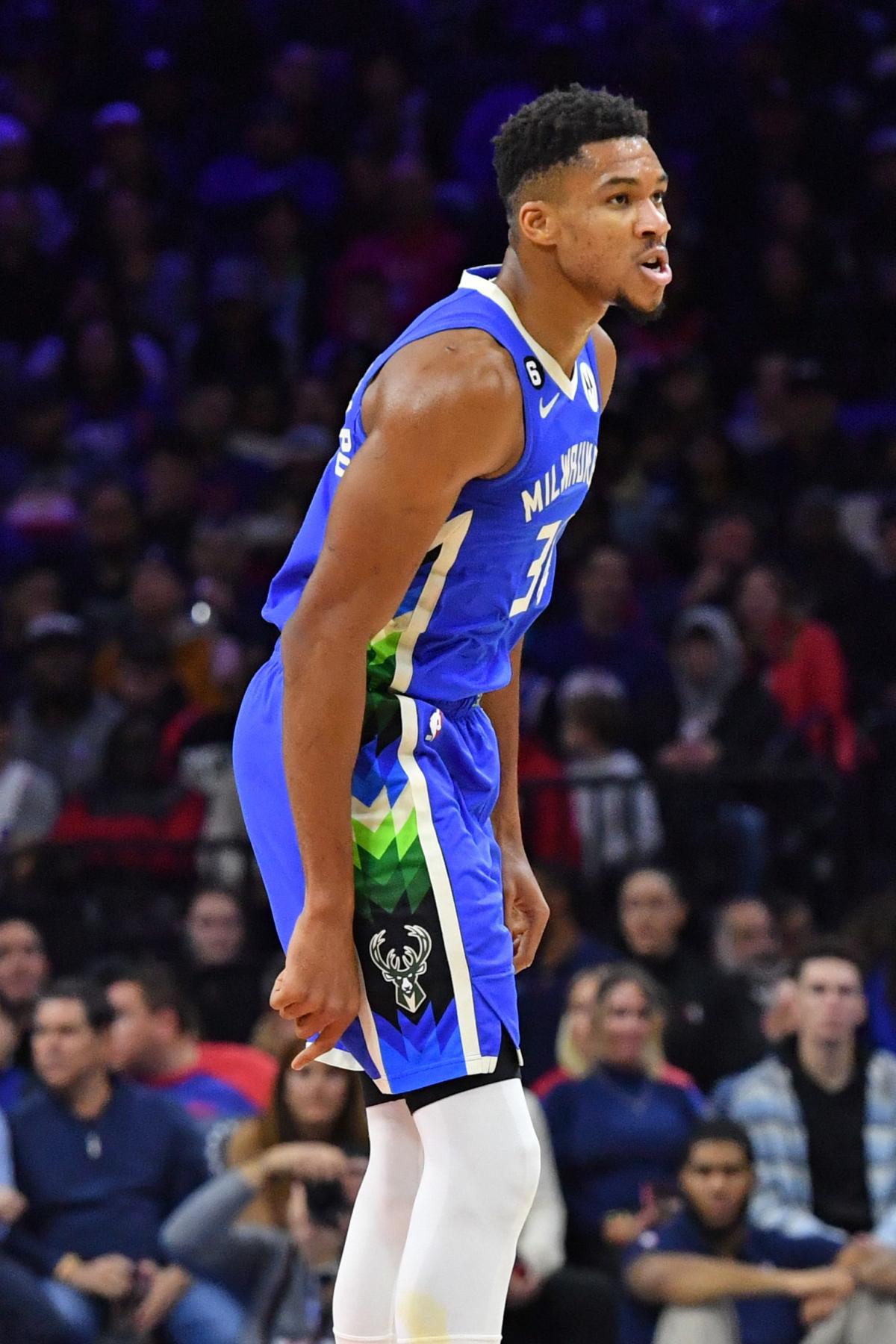 PHILADELPHIA – Through 34 minutes, 16 seconds of play on Friday night at the Wells Fargo Center, Giannis Antetokounmpo did what he normally does – attack the basket. And, he got to the free throw line 15 times. Unfortunately for Antetokounmpo and the Bucks, he made just four of those in a 110-102 loss to the Philadelphia 76ers.

After the game, Antetokounmpo headed out to the court to take extra free throw shots in front of remaining team and arena employees.

Bally Sports Wisconsin and Bucks play-by-play voice Lisa Byington captured the early part of the routine and posted the video on Twitter.

Antetokounmpo said he made seven straight free throws before Philadelphia forward Montrezl Harrell came over and caught the last that fell through the net. In a video obtained by the Journal Sentinel from a source in the building, Harrell then walked to a corner of the court with the ball. Antetokounmpo can be seen talking to Harrell before 76ers player development coach Jason Love stands in front of the Bucks forward as the two players continue speaking.

Antetokounmpo was clearly agitated in the locker room after the game, and he eventually spoke to reporters.

“Obviously I had a very bad night from the free throw line,” Antetokounmpo said. “Now, I take pride in getting better every single day. After the game I decided to go try and make some free throws. My goal, every time on the step on the line is to make 10 in a row and I was shooting free throws, I was at seven I think, a player, I don’t want to mention names, and a coach, basically told me to leave the court.

“While behind me there was another space to do their routine. I respect every player. I know some players don’t play now, they want to get some extra work, want to work on their skills and stuff, and I said, obviously we can shoot together.

“They said, they told me no, this is their court, I should leave. I was like, I have three more free throws, I was at seven, I want to try to make 10 in a row. I shot my eighth one. Came and took the ball away from me and I was very surprised. I feel like it’s very unprofessional. I would never take the ball away from a professional athlete when he’s trying to do his job. I feel like we get, fortunately or unfortunately enough, we get paid to do a job, which is to get better and get on the court and perform in the best of our ability and sometime we have bad nights like today and you want to kind of make it up, put that extra work in and hopefully you can have a better night.

“And I feel like sometimes, I think people that are in this business and do what we do should understand that. I understand that if somebody doesn’t get on the court and he wants to get in shape, he gets extra work, you don’t bother them. So, they took the ball away from me and I was very surprised.”

Montrezl Harrell tweets about ‘respect’ after the incident with Giannis

Harrell tweeted later, “Aye make sure you get the complete story I ask the man can he get off the court so I can workout they had to change the court over he ignore me so hey that’s what you get! Respect is respect! GOODNIGHT!”

Antetokounmpo said he then left the court to retrieve two more balls to shoot with.

When he returned, arena operations staff had begun its takedown of the arena – which included placing a ladder in front of the basket.

A person in the arena videoed Antetokounmpo pushing the ladder out of the way of the basket twice, and the second time with enough force for it to fall over.

“But at the end of the day I think everybody knows my character; not everybody knows – I think the people that know my character – know I never try to disrespect anybody within the NBA, within my coaching staff, within the opposing team. I respect with the best words about any player whenever I’ve been asked. Or I’ve never disrespected an opponent coach or a coaching staff. Or whenever I shoot and finish my (pregame) routine, from my rookie year until now, I always shake every ball boys hand and make sure I thank them for the work I do because I know it’s hard to do their job chasing balls over and over and over again and make sure they’re OK. I do it for my ball boys and ball girls in Milwaukee. They help us when we shoot and I try to do it on the road, too., I’ve been known for this. I never try to disrespect anyone, in any way shape or form. I feel like today was just unfortunate event that took place.

“I think people did not respect the fact that sometimes players want to get some extra work in. It might be three, five, seven, whatever the case might be. I think it’s unprofessional to kick somebody off the court or take the ball or whatever the case might be. Or put the ladder in front of somebody while he’s trying to do his job. We get paid to do this. They didn’t just pick us. We get paid.”

Antetokounmpo was then asked if he was disappointed that there is video of that part of the interaction.

“At the end of the day people are going to make things look the way they want it to look,” he began. “Did I meant to push the ladder all the way down? I totally did not. I just tried to, I think I pushed it and it got caught and fell. But people are going to make it look the way they want it to look. I know what happened. I think there’s cameras all over this court. We can show the whole incident from people coming and getting the ball, people getting in my face. I don’t want to get into all those things.

“I don’t know if I should apologize because I don’t feel like I did anything wrong, except the ladder just fell. I feel like it’s my right for me to work on my skills after a horrible night from the free throw line. I think anybody in my position that had a night like me would go out and work on his free throws. And if they didn’t, they don’t really care about their game.”

As for Harrell, the 76ers forward also got in a shouting match with Thanasis Antetokounmpo during this period of time.

“I don’t think he tried to disrespect me,” Giannis Antetokounmpo said of Harrell. “He wanted to get his work in. And I totally understand. It’s just funny to me because I have a basketball court in my house and my kids always go and shoot. And when ever it gets 9 p.m. I go and take the ball from their hands and I’m like, it’s me-me’s time, we’re going to bed. I kind of felt like, you know, I was; I feel like we’re more mature than that.

“We are professional athletes that try to do our job. You can go and ask him. I offered him to shoot, let’s shoot together. Meanwhile, I don’t understand this because there’s a basket right behind me. Like there was another basket behind me. And, he chose to come to take my ball, have his coach get in front of me, and kind of bully me away from the court and go to the other basket. Like, I’m not going to try to fight somebody. I have kids now, I gotta save my money.

“But now, if you guys see that as disrespect, that’s on you. I was like OK, he’s trying to protect his home court, whatever the case might be, I’m going to go take another ball. I went and asked for another ball and tried to come and shoot and they put a ladder in front of me because they tried to kick me off the court.”

The 76ers and the Wells Fargo Center had no comment on the involvement of Harrell, Love or arena staff.