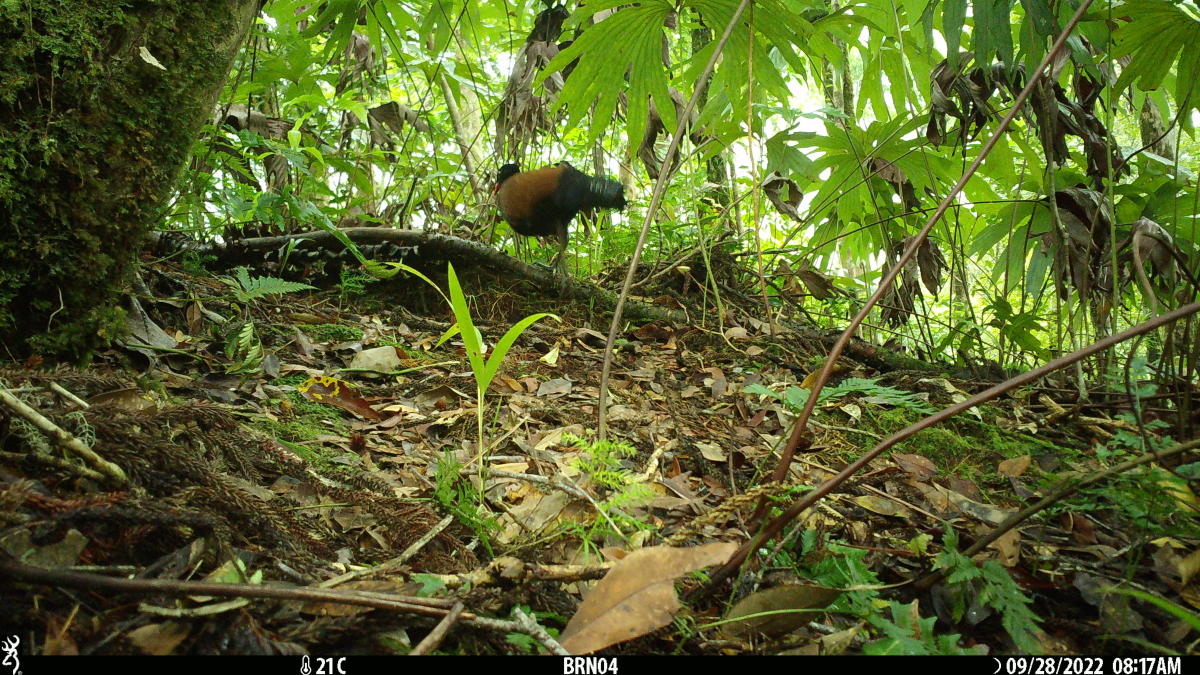 An elusive bird has been photographed on an island of Papua New Guinea, the first documentation of the animal since 1882. The black-naped pheasant-pigeon was photographed for the first time in 140 years with a remote camera trap set up by a research team conducting a search of lost birds.

The expedition team, working as part of the Search for Lost Birds, had been looking for the bird on Fergusson Island for a month, according to a press release.

The Search for Lost Birds is a collaboration of three conservation and bird groups: Re:wild, founded by Leonardo DiCaprio and a group of conservation scientists, American Bird Conservancy, and BirdLife International, which is a group of 115 national NGOs.

The group set up 12 cameras on Mt. Kilkerran, Fergusson’s highest mountain. It was the first camera trapping study conducted on the island, and was made difficult by the mountainous terrain. They also set up eight more cameras where hunters had reported seeing the bird in the past.

“It wasn’t until we reached villages on the western slope of Mt. Kilkerran that we started meeting hunters who had seen and heard the pheasant-pigeon,” Jason Gregg, conservation biologist and a co-leader of the expedition team, said in a statement. “We became more confident about the local name of the bird, which is ‘Auwo,’ and felt like we were getting closer to the core habitat of where the black-naped pheasant-pigeon lives.”

After a hunter in a local village provided a lead on where to see the bird — in an area with steep ridges and valleys — the team set up cameras on a ridge at 3,200 feet. That is where the images of the black-naped pheasant-pigeon were captured.

They spotted the bird walking on the forest floor – just two days before the team was scheduled to leave.

“When we finally found the black-naped pheasant-pigeon, it was during the final hours of the expedition,” said Doka Nason, who set up the camera trap that eventually photographed the lost bird. “When I saw the photos, I was incredibly excited.”

Very little is known about the species, but its population in Fergusson is believed to be small and decreasing. The bird has a “broad and laterally compressed tail, which along with its size, makes it closely resemble a pheasant,” according to the press release.

There have been several previous attempts to find the bird, including a two-week survey in 2019, which helped inform this search.

The team says the bird is likely extremely rare and the rugged and inaccessible forest where they found it “could be the last stronghold for the black-naped pheasant-pigeon on Fergusson.”

The black-naped pheasant-pigeon is considered critically endangered, according to BirdLife International. It is considered native only to Fergusson Island, which is part of the D’Entrecasteaux Archipelago off eastern Papua New Guinea. Only two specimens have been previously studied – in 1882.

Bird not seen for 140 years captured on camera

What the special counsel appointment means for Trump’s political future