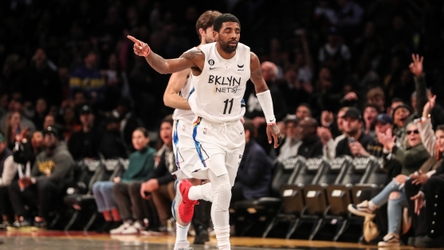 The Nets returned Kyrie Irving from an eight-game suspension, but how Ben Simmons and Yuta Watanabe complemented Kevin Durant was the story of a 127-115 win over the shorthanded Memphis Grizzlies.

1. Irving started and provided a spark, scoring 14 points on 5-of-12 shooting in 26 minutes as he gets his legs back under him. He did not need long for his first bucket, doing so at the first quarter’s 10:41 mark by drilling a 26-foot triple with Durant assisting. Irving added five rebounds in the point guard’s first game back since a four-point, 2-of-12 outing Nov. 1 — a 108-99 loss to the Chicago Bulls.

2. Simmons produced his best game as a Net, scoring a season-high 22 points on 11-of-13 shooting while adding eight rebounds and five assists in 35 minutes. He last dropped 20 on May 11, 2021, while still a member of the Philadelphia 76ers. A positive sign for the Nets, Simmons’ breakthrough saw him be aggressive on offense and get downhill — aspects of his game that have been missing, until this week. He had 15 points on 6-of-6 shooting in this past Thursday’s 109-107 win at the Portland Trail Blazers and now has three straight games of double figures.

3. Watanabe was the X factor in the Nets’ game-changing fourth quarter. His triples with 11:01 and 9:51 left in the final period helped the Nets turn a two-score battle into a double-digit victory. He added two more treys at the 7:52 and 7:15 marks as Brooklyn built a 112-98 lead. Off the bench, Watanabe finished with 16 points on 6-of-9 shooting and a 4-for-6 clip from long range in 24 minutes. Twelve of Watanabe’s 16 points came in the fourth quarter, where the Nets outscored the Grizzlies 31-22.

4. Durant was his usual self as he paced the Nets with a team-high 26 points on 9-of-16 shooting while adding seven rebounds and seven assists in 36 minutes. Incredibly, Durant has scored 26 or more points in every game this season.

5. The Grizzlies were without three of their top players in Ja Morant (ankle), Desmond Bane (toe) and Jaren Jackson Jr. (foot), but they pushed the Nets. Brooklyn, at the same time, did not have starting center Nic Claxton (personal reasons). Dillon Brooks fueled the Grizzlies with a game-high 31 points. Memphis led 62-57 at halftime before the Nets regained the momentum with a 39-31 third quarter, taking a 96-93 edge into the final stretch.

Assuming Simmons plays, it is his first regular-season game against the Sixers — and in Philly — since the Feb. 10 trade for James Harden.

Harden suffered a right foot tendon strain Nov. 2, with the expectation that he would miss a month.