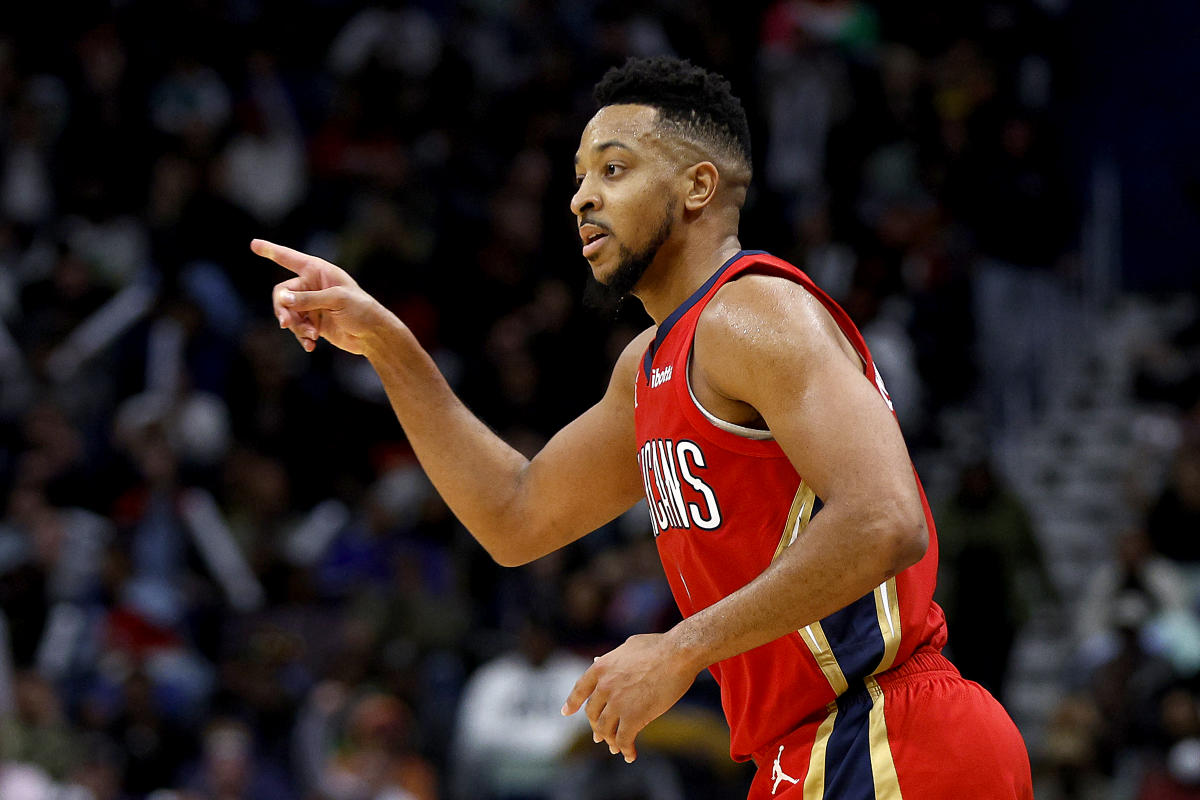 With Thanksgiving and the holiday season approaching, there’s no better time to swing fantasy trades with your friends and family. Never let your guard down. Capitalize on their gluttony or giving spirit.

Jokes aside, let’s examine some hoopers on interesting trends that are viable trade options.

McCollum’s contributions and fantasy dividends thus far have been underwhelming, but he’s beginning to turn the corner. Despite shooting just 41.0% overall and 34.2% from beyond the arc through 17 contests, McCollum has knocked down three-plus triples in four straight games.

His shooting performance is down across the board. While replicating his 2021-22 volume in New Orleans was always unlikely given the return of Zion Williamson, Williamson’s presence in the lineup — often alongside Jonas Valanciunas — could be increasing the difficulty of McCollum’s spot-up looks through less spacing.

Last season, McCollum ranked in the 97th percentile for knocking down his spot-up attempts with New Orleans. With Portland, he ranked in the 88th percentile. He currently sits in the 25th percentile. That’s simply too large of a gap for such a polished veteran. Progression to the mean will occur and has likely already begun. McCollum is easily leading the Pelicans with 34.9 minutes per game, his usage rate is in line with his career average and his career shooting of 45.4/39.4/81.0 is a realistic rest-of-season expectation.

Staying in New Orleans, Nance’s emergence would be a beneficial factor for McCollum, as the bouncy, more spacing-oriented big man allows the Pelicans a lot of creativity. Nance yields an excellent plus-10.4 point differential when on the court — second highest on the Pelicans behind Jose Alvarado and ranking in the 83rd percentile league-wide positionally.

Nance is dominating and versatility is underrated. Grading as an above-average rebounder, passer and steal/block collector at his position (), he’s also hitting a ridiculous 67.6% of his field-goal attempts. A career 53.4% shooter from the field, Nance achieving peak efficiency in New Orleans’ top-five offense is the current trajectory.

Nance’s playing time is gradually on the rise. Averaging 24.6 minutes per game thus far in November, he’s logged 27 minutes six times. Nance is a matchup weapon capable of booming. On a night-to-night basis, he’s trending as a better option than Valanciunas. While there is undoubtedly fluctuation involved, that sets up his buy-low status. Nance is a worthy add-in to a trade and is worth rostering in standard leagues.

Vucevic hasn’t exceeded 14 points in any of his last four contests. His 15.5 points per game marks his lowest total since 2016, while his usage rate and 12.3 shots per game are at their lowest since 2013.

Struggling to finish at the rim, Vucevic could simply be declining during his age-32 season. Additionally, the Bulls’ roster lacks rim pressure, so Vucevic isn’t benefiting from others collapsing the defense. Chicago ranks 25th in points per possession on shots at the rim.

Nonetheless, Vucevic has fantasy merit. His floor is high due to elite and sustainable rebounding. He leads the league with a 31.1 defensive-rebounding percentage. Also, his 3-point clip is bouncing back. Vucevic is connecting on 37.7% of 4.4 triples per game, closer to his career clip of 35.0% than his 31.4% shooting from deep last season.

It’s hard to say how much Vucevic will improve down the stretch, but his recent production makes him a viable buy-low candidate.

Melton has logged back-to-back strong outings while settling into a prominent role with James Harden (foot sprain) and Tyrese Maxey (foot fracture) both out. Melton is a versatile contributor, buoyed by a prowess for racking up steals and a solid 3-point stroke.

That said, Melton is unlikely to be a season-long fantasy asset/breakout beyond his current form. However, with 2-3 weeks until Harden and Maxey return, Melton has a sizable window of production to offer. Even if he’s playing well, don’t get attached. If you’re in a position to do so, trading him for a more helpful contributor for the fantasy playoffs will not be a regret.

involving Washington are beginning around the NBA. With Charlotte far removed from playoff contention and in limbo salary cap-wise, Washington is a very logical trade candidate. While a deal is most likely to occur closer to the February trade deadline, if an opportunity arises to capitalize on Washington’s value, it would be worth considering.

Washington is averaging 15.7 points, 4.8 rebounds, 1.9 assists and 1.6 steals/blocks per game across 18 contests this season. However, his shooting has been poor, with the 24-year-old connecting on just 42.9% of his field goals and 32.0% of his triples. Both of those marks are career-worsts for Washington, but he’s attracting more defensive attention than ever in the biggest role of his career. Another factor: LaMelo Ball (ankle) struggling to remain healthy has stripped Washington of a considerable gravitational force usually playing alongside him. Washington has five contests of 20-plus points — two of which occurred alongside Ball, who has played just three games this season.

I’m fond of Washington’s game. The additional pressure to create for himself will ultimately make him a better basketball player. Nonetheless, it’s a tough spot in fantasy. If Charlotte deals Washington, I imagine his volume decreasing but his efficiency increasing. Relying on a trade candidate is tricky because the destination is a wild card, which leans Washington onto the sell list for me.